Originally published at www.carloscaballero.io on February 8, 2019.

The definintion of memoization from the wikipedia is the following:

In computing, memoization or memoisation is an optimization technique used
primarily to speed up computer programs by storing the results of expensive
function calls and returning the cached result when the same inputs occur
again.

Memoization is a programming techique which allows reduce the function’s time
cost for space cost. That is, the functions which are memoized gains speed
for a higher use of memory space.

In the following animation you can see the final result of applied memoization
in our code.

What is a pure function?

A pure function is a function that meets the following criteria:

But, in the real life there are side-effects and it is a good part of the code
(for example, when you access to the database or communicate different servers
to request information about the system). So, pure functions are a part of your
code, and you need to know when you can use a pure functions and when you can
use memoization in your code.

Recursive functions frequently use the pure functions, the most classical
recursive problem is the factorial.

But the imperative version of the function factorial is pure too, because the
pure functions is related with inputs and outputs. In both case when the input
is the same the output will be the same. 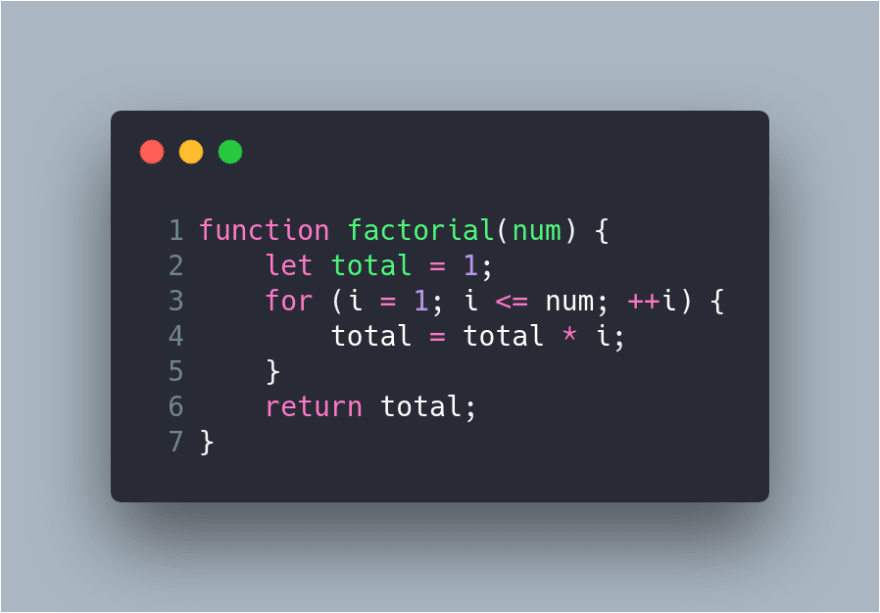 Another interesting examples of pure functions are the following:

The memoization is the programming technique which allows doesn’t recalculated
the value of the pure function. I.e, the pure functions returns the same value
when have the same inputs. So, the value return can be store in the system using
any cache system (for example a map or array). So, if you calculate the value of
factorial(1) you can store the return value 1 and the same action can be
done in each execution. So, when you run the factorial(100) you take a while the
first time but the second and more times the time will be reduced!

In this case, if you note the recursive factorial version, you can note that
this version execute several times the function factorial which can be cache
in our system (using memoization) but if you use the imperative factorial
version your performance will be worse. For this reason, memoization is a good
known technique in declarative languages.

In this section I’m going to show you how implement memoization using closure
and the decorator pattern using JavaScript.

The decorator pattern allows add new features to any object in runtime using
composition instead of hierarchy. The pattern goal is avoid create a class
hierarchy of our features.

A good example to understand this pattern can be found in the Addy Osmany’s
Blog.

So, a basic implementation of memoize decorator in JavaScript is the following: 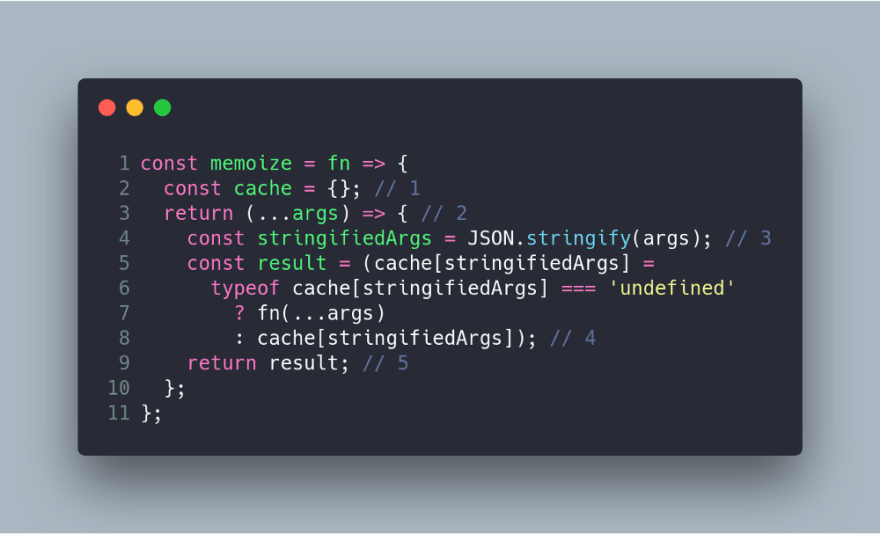 How to used our memoized decorator ?

The way to used this decorator using JavaScript is very easy:

Now, I’m going to show you a real deam using memoization. Imagine a complex
algorithm that indicate you if an array has a unique value (as the
Array.prototype.some) but horribly programmed. 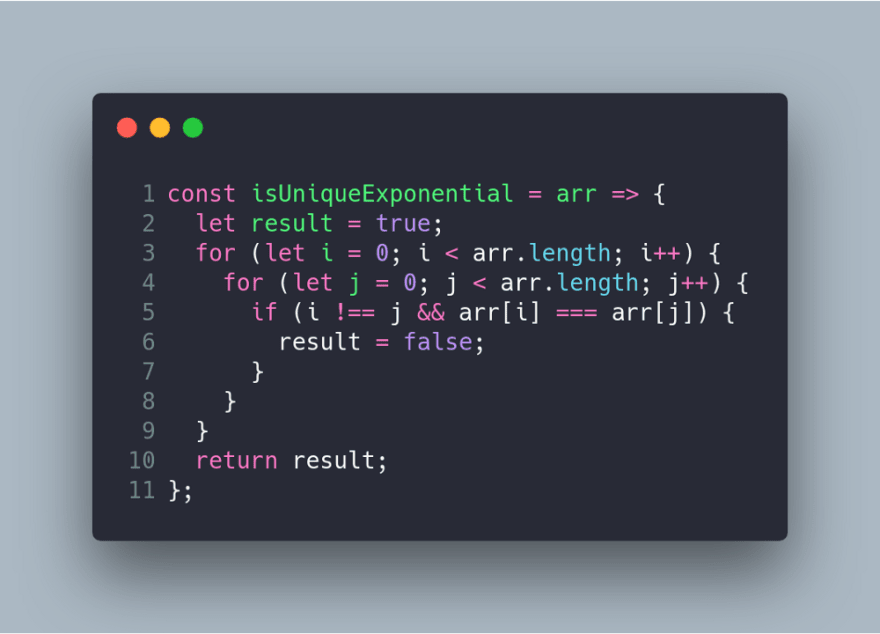 The following step is run the original code and the code using memoization and
compare the time use in each function. It is very important remember that the
original code is not modified but the memoization feature is added.

The following function is used to measure the time used in each execution.

The array are generated at the begin of the script:

And finally, when the user click in a button the functions are execute. 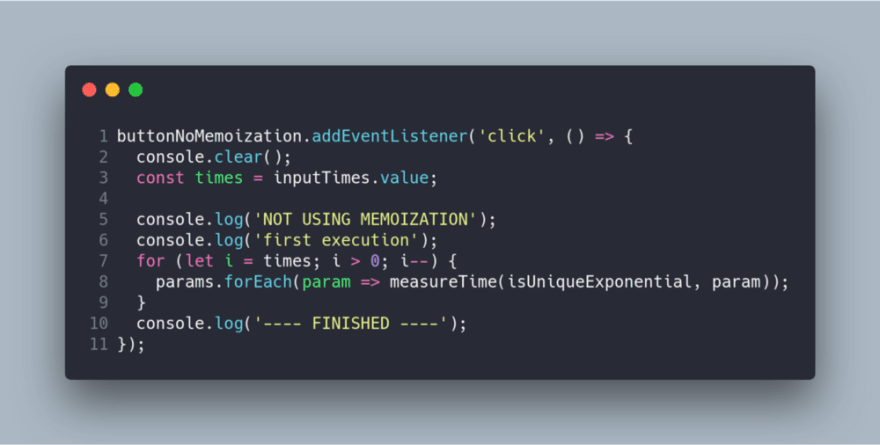 The result is shown in the following animation:

The memoization has been widely developed in web development using TypeScript
or JavaScript. The following list of resources must be the starting point to
use them in your projects.

Fast-Memoize use this graph to compare different implementations of memoize: 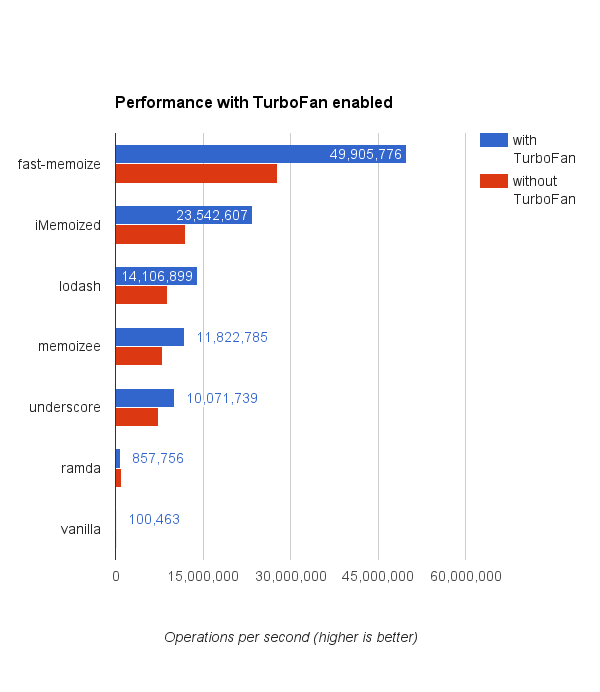 Originally published at www.carloscaballero.io on February 8, 2019.