As a coder, finding a text editor that works for you is critical. You’ll be spending tons of time working in it, so get cozy.

For those just getting started and wondering about text editors, why they’re important and which to use – keep reading!

What is a text editor?

The formal definition is:

“A text editor is a type of program used for editing plain text files.”

Essentially, a text editor is a program on you computer that allows you to create and edit a range of programming language files.

AKA this is the place where you write your code!

"Why is it important for me to know about the different Text Editors and IDE's available out there, if the one I am currently working on works just fine?"

There's nothing more satisfying than finding the perfect Text Editor., and you won't find the perfect one unless you try some of these out yourself.

Keep in mind that there is no THE BEST EDITOR out there, each one is different, the best text editor for you is ultimately what makes you most efficient., so experiment with a few find out the one which suits you the best.

Now there are dozens of editors out there but I will only mention the ones which have gained immense popularity and are widely used by the community, and are FREE to use.

Here’s a collection of my favorite text editors. Some of these are also considered IDEs.

Text editors are not the same as IDEs (Integrated Development Environment). While almost every IDE has the capability of creating and editing plain text documents, they also include an abundance of other features.

IDEs have different panels and widgets, taking a lot more space. An everyday text editor is much more lightweight and flexible.

Meaning you can do a lot more with IDEs than simply write code.

Visual Studio Code is a open source-code editor made by Microsoft for Windows, Linux and MacOS.

Not quite an IDE (that’s actually a separate product altogether), VS Code can take on most of the tasks of an IDE with the right configuration and plugin library. 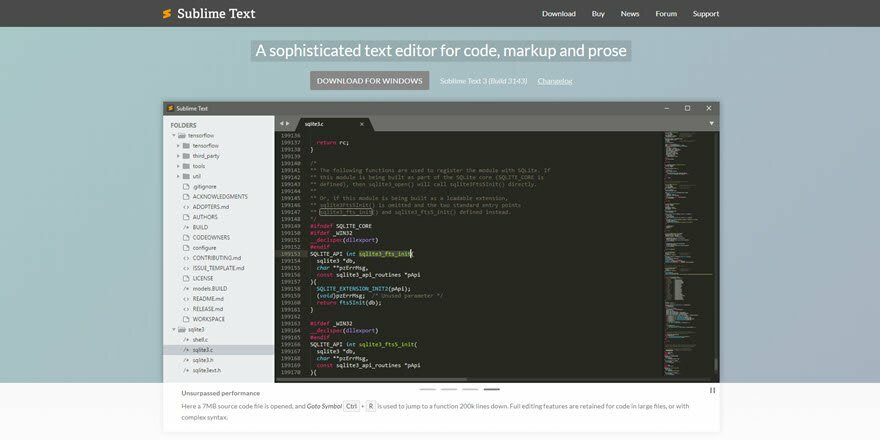 Sublime Text is a beautiful, feature-rich code editor. Maybe the biggest draw is that it puts a premium on user experience. The UX is probably the tightest of every entry on the list. This is because of features like distraction-free writing mode, quick shortcuts/search, split editing, and much more. One of the biggest features users flaunt is the ridiculously intuitive keyboard shortcut system.

They offer an indefinite, never-ending trial so it's essentially free to use unless you chose to upgrade to premium.

Vim is hardcore. Let’s be clear about that upfront. While other text editors are newbie friendly this one is definitely not. From the official website down to the software itself, Vim is a coder’s tool for coders by coders.

It’s designed for use both from a command-line interface (CLI) and as a standalone application in a graphical user interface (GUI).

Vim definitely requires a learning curve and a willingness to immerse yourself in a whole new feature-set that might not be the same as some other text editors you are used to.

Once you get past the UI and the steep learning curve, you’ll see why the text editor is designed the way it is. It does roughly everything all the other best text editors can do. But more than maybe anything else on the list, it’s designed for efficiency and function. 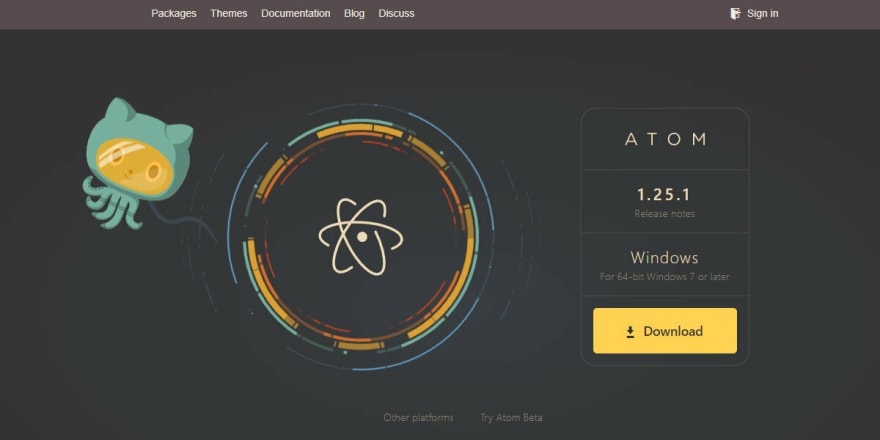 Atom is a free and open-source and highly customizable text and source code editor for MacOS, Linux, and Windows with support for plug-ins written in JavaScript, and embedded Git Control, developed by GitHub and now owned by Microsoft. Atom is a desktop application built using web technologies.

Built around a minimal core, Atom comes with multiple language-specific packages built in, and the library of community-written ones has exploded over the years since the editor was first released.

Notepad++ is an extremely popular text editor. That is in part because it’s free and GPL-licensed open source. Even more than that, though, the reason it’s one of the best text editors around is that it’s simple.

One of the things that makes Notepad++ stand out is the fact that it’s already been translated into over 80 languages.

The downside: this software is Windows-only. 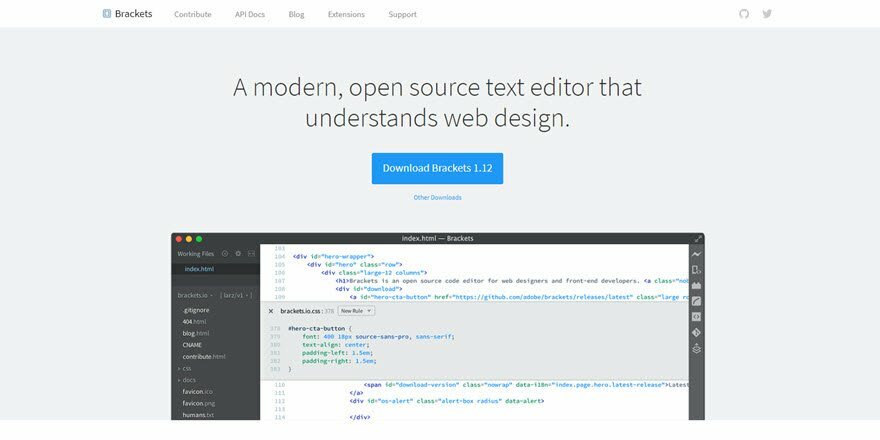 Brackets is a free and open-source code editor that is made for web developers. Created and released by Adobe Systems, Brackets has a clean user interface that is filled with brilliant features: Live Preview, Quick Edit, etc. Link to download
Codeshare: Share code in real-time with developers in your browser.

It does, however, offer some unique and useful features. One of those features being Extract, a tool which allows you to extract information such as colors, fonts, gradients, measurements, directly from PSDs as clean CSS. For front-end developers working in a design agency who have to recreate pixel-perfect sites from mock-ups, there may be no better tool for you. 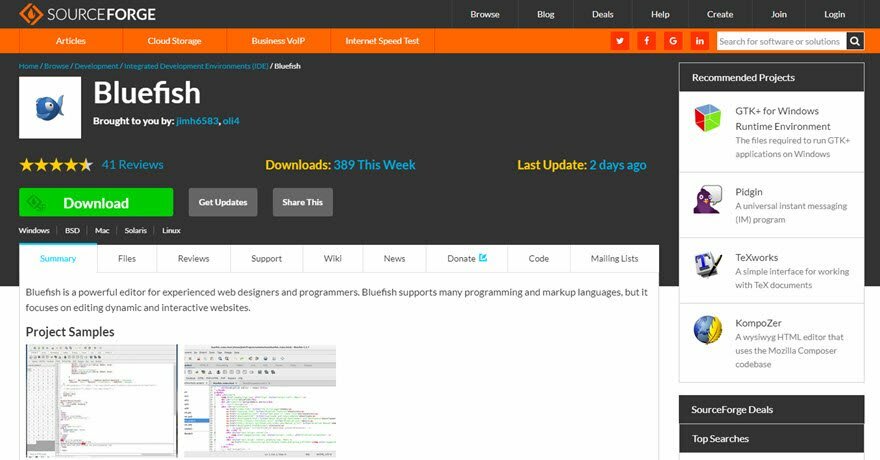 Bluefish is more of an IDE than a real text editor, which means it may be a little advanced for brand new users. It’s free, supports pretty much every language because it’s open-source, and comes with a wide variety of useful features for use across many platforms. It supports coding languages including HTML, XHTML, CSS, XML, PHP, C, C++, JavaScript, Java, Go, Ada, D, SQL, Perl, ColdFusion, JSP, Python, Ruby, and shell.

It is a simple yet powerful Online IDE, Editor, Compiler, Interpreter, and REPL. Code, compile, run, and host in 50+ programming languages.

Share code in real-time with developers in your browser. An online code editor for interviews, troubleshooting, teaching.

The default editor that comes with the UNIX operating system is called vi (visual editor).

I LOVE VS CODE. It’s the first text editor I ever downloaded and I’m not looking back.

I’ve played with Sublime, but there’s something about VS Code. It’s attractive, easy to use, tons and tons of customizations and modifications using the never ending extensions … plus all my friends use it

But, truly, VS Code is a great editor – that’s why so many use it, and it has gained immense popularity since it's release.

What do you think are the best code editors?

Let me know in the comments!

I hope you found this article valuable. If yes do let me know in the comments 😊

Also if you got any question feel free to ping me on Twitter.

How did i Build my Second brain in 4 easy steps

KUMAR HARSH
The best way to learn is to teach.Programmer by Passion and Developer for Fun, and I love sharing my journey with everyone.
Custom Snippets in VS Code
#productivity #vscode #codenewbie #beginners
What is Linux ? 🤔
#linux #bash #ubuntu #codenewbie
Want to Host Your Website for free ?
#productivity #webdev