Azure Functions provide flexibility with your workflows and logic processes, no doubt about it. In parts one and two of this blog series, you created different types of Azure Functions, provided input data with a trigger, configured event-based triggers and used output bindings to send data to other applications.

To date in this series, you have not worked directly with Azure Resources using the Az PowerShell module within the function itself. This is because access to Azure resources from the functions have not yet been configured. Additionally, you have not been shown how to handle passwords or secrets you may need to leverage within the function, you definitely don't want to be storing those in plain text in the run.ps1 file itself.

In this guide, you will configure a managed identity on the function app and provide access to Azure resources for that identity using Azure role-based access control. Next, you will deploy an event grid function that shows this access working by setting tags on Azure resources based on logic within the function. Finally, you will learn how to securely access secrets stored in Azure Key Vault from within a function.

When you're finished, you'll be able to securely provide Azure functions with role-based access to Azure resources and leverage password and secrets in your functions that are stored in Azure Key Vault.

Before you begin this guide you'll need the following:

Step 1 — Configuring a Managed Identity and Role Based Access Control

There will be times in your functions that you want to read, modify and maybe even delete resources within your Azure subscriptions. By default, the functions you create do not have permission to manage any of your Azure resources, whether that be in the same or separate subscriptions. By configuring a managed identity and setting role-based access control, the function app (and therefore all functions within the function app) will have the permission to manipulate resources that you provided the managed identity access to.

First, log in to the Azure Portal, search for Function App and click on your function app. Our function app is called cloudskills20200406, yours will be called something different. 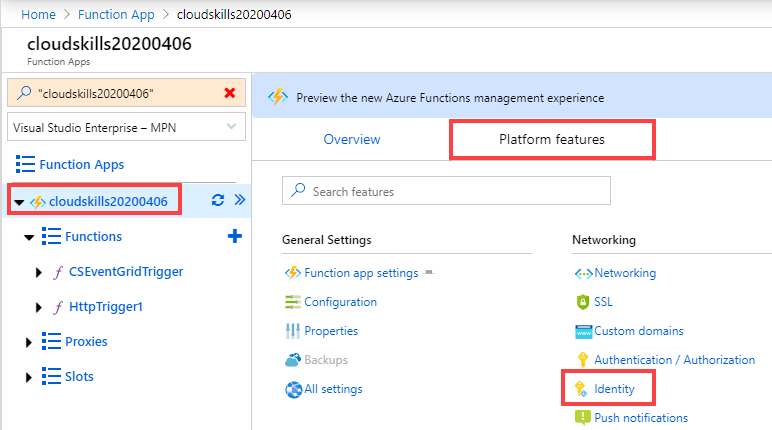 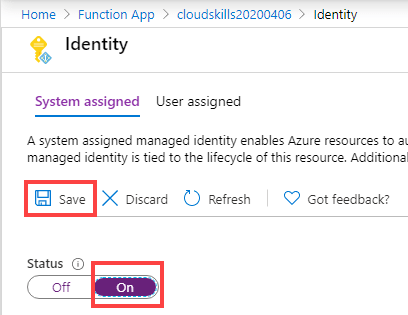 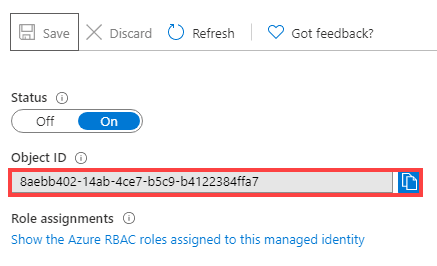 In an earlier blog post in this series you created an event grid function, which was triggered following a particular event, processed some data then wrote the processed data out to a table in Azure Storage.

In this step you will create another event grid function, but instead of writing out to another application or service, the function will leverage access from the newly assigned role in the previous step to modify an Azure resource directly. The function will look for when a new resource group is created, and based on the value of a tag named Env, will then add another tag to the resource group named CostCenter with an appropriate value, either 0001 if the Env tag is Development, or 0002 if the Env tag is Production.

This paragraph is going to be high-level steps as you went through this in the previous post in this series. If you haven't read that post, please refer to it for the detailed walk-through steps. In the Azure Portal, open your function app and create a new function based on an Azure Event Grid Trigger. Add an event grid subscription with the following settings: 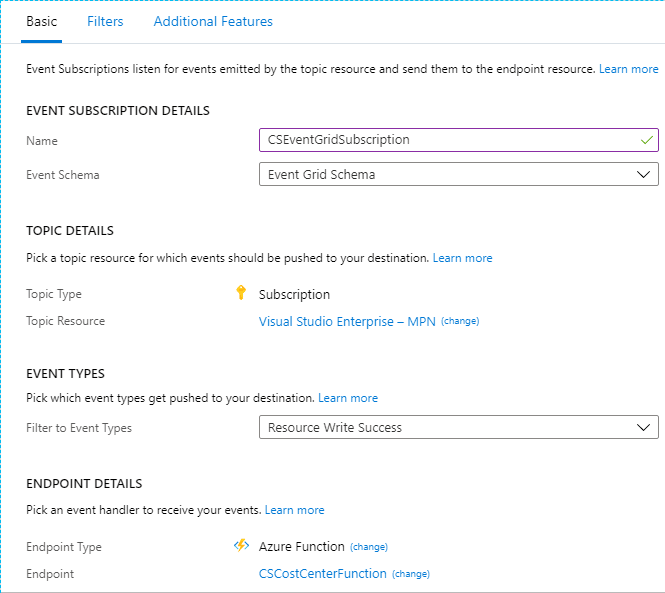 Next, after your event grid subscription is created, you will be back in the editor looking at the run.ps1 file. Copy the PowerShell function below and click Save.

Notice in this code the PowerShell Az cmdlets are being leveraged to Get and Set Resource Groups. By default, when a PowerShell function is created, behind the scenes there are some extra files. You will explore those further in a later blog in this series, but one of those files is requirements.psd1, which contains the following code:

What this means is that the Az PowerShell modules are loaded with the function and are available for use.

Finally, go ahead and create a test empty resource group so the new function is triggered. Make sure during creation you assign a tag with a Name of Env and the value is either Development or Production. You can use the PowerShell example below to create a resource group with an appropriate tag:

After a few moments, if you watch the log stream you will notice the function is triggered. If you check the tags on your resource group, you now will have an additional tag with a name of CostCenter. 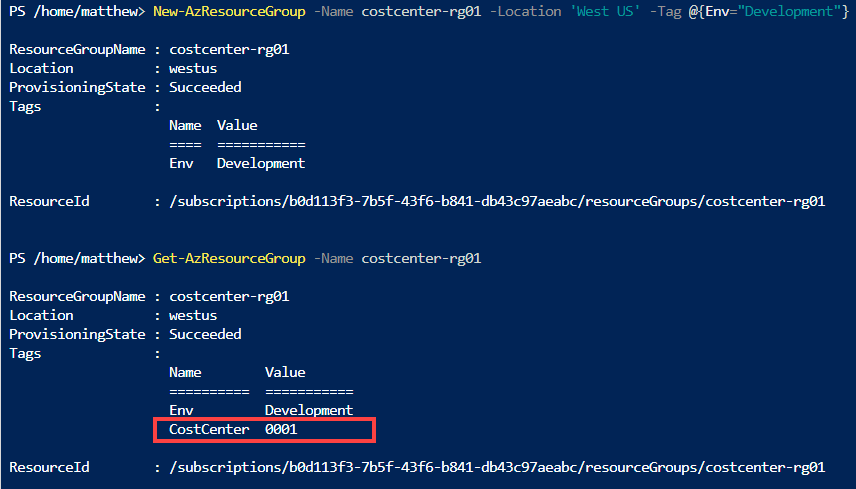 This capability provides you with effectively an unlimited range of options on configuring role-based access control to your Azure resources to then manage and maintain them using Azure Functions. In the final step of this post, you will learn how to access secrets stored in Azure Key Vault such as passwords and API keys securely from your function.

Occasionally you will want your function to connect to an endpoint that it is not authorized to by default. This could be an Azure resource, such as the guest operating system of a virtual machine, or it could be an external service such as an alerting system. Hopefully it goes without saying, but just in case, it is not a good idea to save these secrets in the run.ps1 file in clear text. Historically, the method was to create a new "application setting" within the function app which has a name and a value. The application settings can be called from the PowerShell function by using an environment variable such as $env:AppSettingName. Application settings are encrypted at rest and are transmitted over an encrypted channel, but they can still be exposed in plain text and there are no advanced secrets management capabilities such as versioning or auditing.

First, select your function app in the Azure Portal, click on Platform features and then click on Configuration. 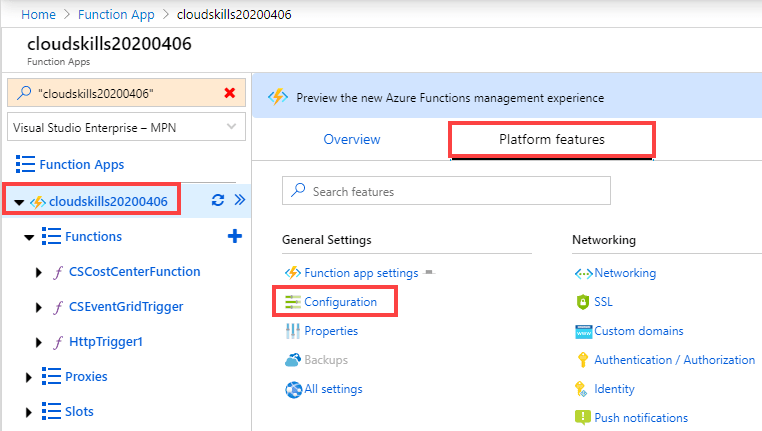 Click New Application Setting, for the Name enter AlertSystemAPI and for the value enter KeUkcwjdBIrmgEzvKOlRuNKowAfg and then click ok. This isn't a real key for anything, it is simply an example.

On the configuration screen, click on save and click continue. At this point in time, you would be able to reference the value of this new application setting by using $Env:AlertSystemAPI in your PowerShell code inside of run.ps1.

Next, you will create an Azure Key Vault. The examples below are done in PowerShell to make it easier than navigating through the portal with screenshots. You might try it as well using PowerShell from the Cloud Shell, or https://shell.azure.com.

By default the Key Vault doesn't have an access policy assigned, so no users or accounts can access the vault. Here, you will provide the managed identity of the function app (the ObjectID being used below is the same one we used in step 1) access to get secrets from the new vault, as well as providing your account access to get and set secrets. Just make sure to update the value of ObjectId and -UserPrincipalName in the text below:

Finally, you will create a new secret in the vault with a name of AlertSystemAPI and a value of KeUkcwjdBIrmgEzvKOlRuNKowAfg:

In the output of the last command, you will see an ID for the secret that has been created. Copy this ID to your clipboard, you will need it in a moment.

Lastly, you will now update the value of the application setting in the function app to reference the secret you just created. In the Azure Portal, navigate back to your function app, click on Platform features and Configuration. Click on the Edit button for the entry named AlertSystemAPI and replace the value with the following, making sure to replace <SecretID> with the ID that you copied in the last step:

You still reference this value by using $Env:AlertSystemAPI in your PowerShell code inside of run.ps1, but now instead of the value being stored in the function app, it is stored in a central Key Vault providing the standard and regulations of secrets management.

In this article you configured a managed identity on a function app and configured an Azure role assignment to a subscription for the managed identity. This provides the ability for functions within the function app to manage Azure Resource that is has delegated access to. Next, you deployed another event grid function and used logic within the PowerShell function to put a cost center tag on a new resource group, dependant on which environment tag value was assigned to the resource group during deployment.

Finally you reviewed the application settings within a function app to understand how environmental values are stored and called. Though these are encrypted at rest and in flight, they lack some core secrets management capabilities, so you enhanced this functionality by creating an Azure Key Vault Secret in a new Key Vault and referenced the secret from the function app application settings.

Trying to keep up with the cloud? Subscribe to the CloudSkills.fm podcast for weekly episodes with expert guests, technical tips, and career advice for people working with cloud-native technologies.

Once suspended, cloudskills will not be able to comment or publish posts until their suspension is removed.

Once unsuspended, cloudskills will be able to comment and publish posts again.

Once unpublished, all posts by cloudskills will become hidden and only accessible to themselves.

If cloudskills is not suspended, they can still re-publish their posts from their dashboard.

Once unpublished, this post will become invisible to the public and only accessible to Matt Allford.

Thanks for keeping DEV Community safe. Here is what you can do to flag cloudskills:

Unflagging cloudskills will restore default visibility to their posts.