Hey everyone! Welcome to a special edition of Code Review, our weekly series of coding challenges and job related content. In this post, I’ll be talking about one of my favorite side projects, Breadwinnerss, and how you can impress future employers by flexing your coding and problem-solving skills! I’ll go over what makes for a great side project and how to talk about your projects on your resume and in interviews.

Remember, if you like this content and want more of it, subscribe to our newsletter here to receive the latest and greatest we are putting out on Dev.to and on Coderbyte.

From a technical perspective, a good project idea is perhaps the least important part of any good side project. But, trust me, a compelling project that solves a real problem is way more impressive to an interviewer than another 'alarm clock app.' So how do you find awesome project ideas?

You might have your own, but since you're a developer, the odds are you know someone is good at identifying cool problems to solve. Personally, I connected with the founder of the first company I worked at Nis Frome. Entrepreneurs have a track record for problem solving and I've found that they usually have a backlog of ideas, big and small. You probably know more than a few who would love to partner.

Nis had a number of projects he wanted to work on, but one in particular required some cutting-edge tech, which made it attractive to me. Today, the project is called Breadwinnerss and it solves a problem that Nis is very passionate about: helping people in his network find jobs at companies in his network.

Every week Nis gets 5-6 requests from job seekers asking for introductions to companies he has contacts at. Before Breadwinnerss, Nis would spend time browsing career pages from companies in his network to make matches and intros. Breadwinnerss was born to help alleviate some of that manual work. We essentially built a massive web scraper that scrapes career pages and aggregates the jobs into one live feed (kind of like an rss feed… get it? Breadwinnerss?). That way, when someone asks Nis for an intro, he can just send them a single link to his Breadwinnerss feed where the user can request intros for whichever roles they're interested in across dozens of companies. Already, Nis and our other users have helped several people get really cool new jobs. 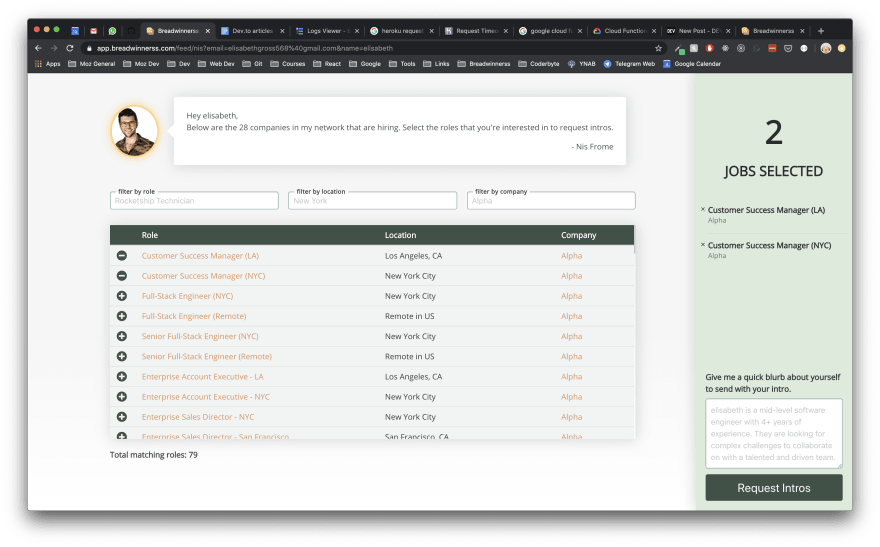 The main goal for this side project was to learn, so I specifically picked technologies that I hadn’t done much work with before. This is an excellent talking point in an interview. It’s an opportunity to show your interviewer exactly what you can do when faced with new or unfamiliar technologies which is essentially what will happen at almost every new job you ever take.

That being said, you don’t have to reinvent the wheel. For Breadwinnerss, I chose full stack Javascript because that is something I am comfortable with, but I chose almost all new frameworks and tools to go with it. I used Node and scraping libraries called Cheerio and Puppeteer to build the scraper. I deployed that to a Google Cloud function which runs daily. The scraper script itself scrapes each company’s career page with a custom scraper function I built and saves all those results to a file in an AWS S3 bucket. The web application part of Breadwinnerss is also built using Node, with express as the routing framework and Postgres as the database. The front end was built using Vue.js. The web app reads the scraped jobs from s3 and serves them to the front end. It lives on Heroku.

To a large extent, tech interviews are basically one big simulated problem-solving exercise. Can you troubleshoot? Can you learn quickly? Can you jump into a fluid environment and adapt? It's important to emphasize how you solved technical problems while building your project – it'll alleviate a lot of pressure during the interview.

One of the biggest changes we made to the architecture of the app was changing how and when the actual scraping happened. When we started, the initial proof of concept was just for Nis and scraping the 8-10 companies from his network. Naturally, I just scraped every company on page load of Nis’ Breadwinnerss feed. The scraper was coupled with the web application code and would get the latest list of jobs every time someone visited the feed. This actually worked for us for quite a while and doing that as our MVP allowed us to release an early working version. Some people might think that learning 5 things at once and perfecting the tech stack before release will look very impressive, but more often than not, it just prevents you from ever releasing it.

That was fine until we got to scraping about 20 companies. At that point, the request for scraped jobs was taking longer than the maximum Heroku will allow a request to last (about 30 seconds). This was when we decided to cache the results of each scrape in a file in an S3 bucket. We also moved the scraper code to be in a self contained module that we deployed to Google cloud functions to be run on a daily cron. All this allowed for feeds that load quickly and the ~100 companies we now include in our scrape every evening.

Showcase projects on your resume

Most developers already put their GitHub profiles on their resume. If your project is in a public repo, savvy recruiters may check it out. But that's basically burying something that gives you a significant edge.

I'd recommend instead creating a dedicated section to call out your project, any cutting-edge tech used to build it, and any market traction or validation you have such as number of users or even revenue.

In summary, here are 4 of my main tips when it comes to building a side project:

Check out the code on github!

We felt it was important to make the code public so other people can learn from how we built this project. Go check it out on github and let us know what you think.

Visit Coderbyte to improve your coding skills and prepare for your next job interview.