We all love to share our wins. It's a lot harder to share our failures. Behind every success there are often a lot of slammed doors that proceeded it. I'm writing this to help me process what I recently went through and maybe encourage others who are on the job hunt.

This thread on Twitter spurred me to write this. 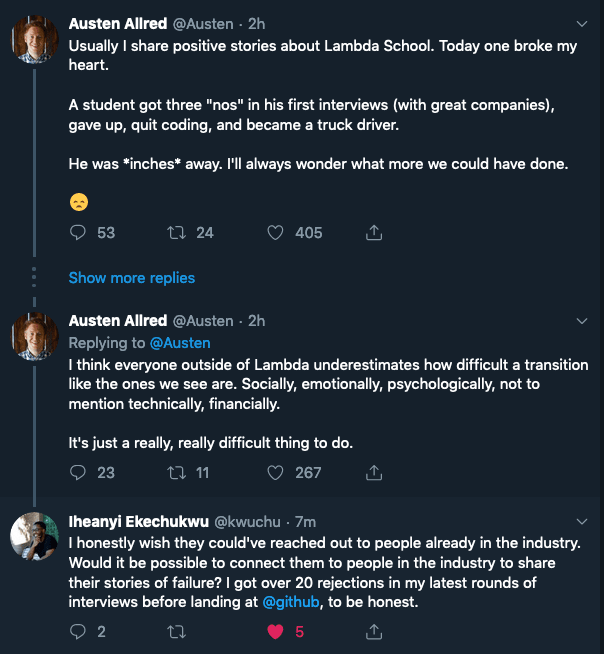 Last year I accepted a contract job 2 days before I found out I was pregnant with our 4th kid. It was a great job and paid well but I was completely freaked out when I found out because I just gave up a job that was a little more secure and had benefits.

I let my new employer know pretty early on that I was pregnant and talked about what would happen when I was due. Knowing it was a contract job I figured they would let me go before I had my daughter.

They actually assured me over and over that I could take a little time off and come back and work.

Fast forward two weeks after I had my daughter. I wrote to let them know I was ready to come back. They didn't respond. I was kicked off their team slack and company email. A day later I emailed my manager from my personal email and only then I was told they no longer needed me to work for them.
Cue pitty party

Actually I didn't have time for that. My family and I had recently moved to Costa Rica and I just had our 4th kid. We couldn't afford for me to have a pitty party. (Though I totally cried because ... post-partem hormones are rough.)
Luckily I spent the last 3 years building a network on Twitter. I put out a tweet looking for new opportunities.

Found out while on maternity leave that I no longer have a job.

I was suddenly flooded with a lot of opportunities. And really appreciated it.

At that point I started writing my resume and cover letters for each position I was interested in.

I probably should have vetted the jobs a little better. Applying for, interviewing with, and hearing "we are going with another candidate" over and over is exhausting.

There were several interviews where I had to hold my newborn ( probably vetted out a lot of companies that way ).

While I did talk to a lot of great companies I started to see a pattern with many of them.

Get to know you

This was probably my least favorite part of the process. Even more than the code challenges.
Probably because I was pretty sleep deprived and trying to keep it all together while caring for a newborn and three other children.
It honestly just seemed like a big waste of time. After spending a good amount of time on my resume and cover letter, plus providing links to all of the places a company could learn more about me, I still had to set up these 10 to 15 minute initial interviews. Where they usually asked me the same things I already said in my cover letter. This is when I was usually holding a sleeping baby and I am sure the first impression I gave a lot of these companies wasn't so great. (Was totally holding my baby when I interviewed with current employer and they were cool with it, thanks y'all)

But I think the same could be said for the companies interviewing me. When I had to repeat all of the things I had already written in whatever application I filled out and/or my cover letter to a company that already didn't seem super interested I was usually happy to end the call quickly.

Ghosting or hitting the friend zone

The other really negative aspect was talking to companies who seemed really interested in you, and some that even made it seem like you were likely to get an offer only to ghost you.

When talking about it with my sister-in-law recently we compared it to a prospective love interest. The person (prospective employer) keeps you hanging on with hope that they will commit until one day you get a text (email) saying they just want to be friends("we are going with another candidate but will keep you on file")

That's if you get an email at all.

And then you go through a little heartache period. Like you have just been dumped. It might sound ridiculous but it's true. You put a lot of work in to the whole process and in the end you are left with nothing. So how do you keep going on?

That's definitely something I kept asking myself.

Keeping it together when everything is falling apart.

I did keep trying to find the positives while I was interviewing.

I learned a lot about myself.
I learned what skills I still needed to develop to be a better candidate.
I realized after a few interviews that teaching was a direction I wanted to go (and ultimately ended up at).
And I also learned what kinds of companies I wouldn't want to work with.

Overall it was exhausting. Granted a lot of that could be due to the fact that I literally just had a baby.

But this is something I have been seeing a lot from developers. A compliant that "hiring is broken". The time commitment that goes into all of it is crazy. Especially for anyone who has any sort of life outside of their job.

The whole interviewing process can just be so disheartening. You know what you can do as a developer but you quickly start doubting yourself when you are passed over for jobs again and again.

All in all I think I got around 20 rejections. That can easily tear you down.

I love sharing my wins. I love encouraging everyone to keep going. It's something I have been trying to do since I started in tech. It was something that helped me through post-partum depression after having my other kids.

Sharing the losses are a lot harder. But I think it's important to talk about. Life isn't all wins. Most people who have something good going for them have gone through a hell of a lot of bad before they got there.

If you take anything from this besides me just complaining😬 I hope you keep pushing.
It sucks. It does. I hated interviewing.
You will probably hate interviewing.

But in the end we need a job and that's what we are going to keep working towards. Know that many of the developers you see online are rejected multiple times before they get their current job. You aren't alone in the struggle.

Cry if you need to, eat some ice cream, or exercise(if you are a weirdo who doesn't like comfort food) Do whatever you need to and then keep going. And feel free to reach out to me if you ever need someone to rant to about interviewing or just need some encouragement

Kraken Clone Script-Everything that you should know about kraken exchange