Starting with Git? Came to the right place!

Git (not github) is a versioning tool used mainly by software developers, which means you can version your software, create working branches so you and other developers can work at the same project, rollback to previous versions if you mess something up, etc.

So Git and Github isn't the same?

Exactly! Github uses Git to build its hosting platform, just like other platforms such as Gitlab, Bitbucket and so on. It allows you to publish and version your code, creating public and private repositories to share or not with the open-source community. Each platform has its own features but most developers use Github to host its personal projects, so we'll use Github in this article.

Otherwise, you'll have to install the Git CLI (Command-line interface) in your system.

Now that we have Git installed, lets initialize the local Git repository in a project folder with the following code:

It will generate a hidden git folder in our project with some configs, now we can link our local repository to our Github repository, so we can publish the changes.

Creating a Github repository and linking the local repository

Now you need to give the repository a name, it can be github-tutorial. Select public repository so everyone can see you're learning Github and create the repository. As soon as you create your repository, you'll see the following page with clear steps on how to link the repositories. 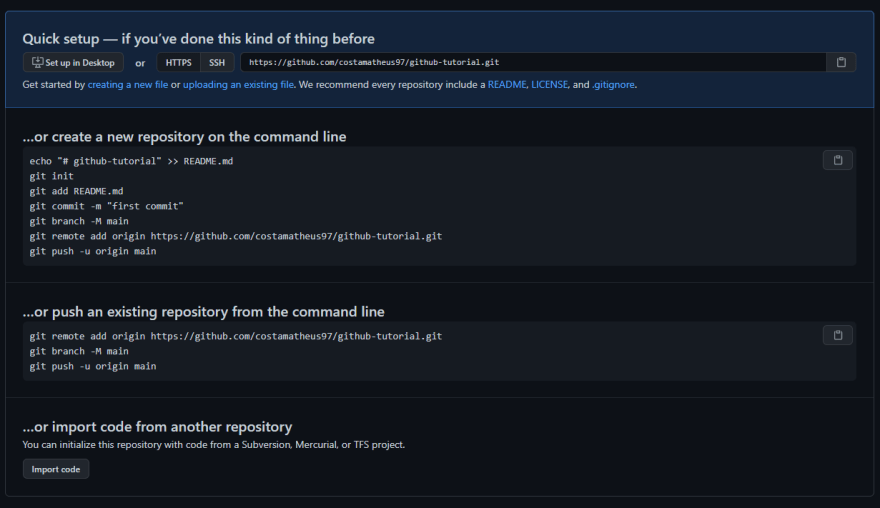 We already initiated the local repository, so instead we'll follow these steps:

With these 2 lines, we'll be switching the main branch name from master to main and linking our local repository to the hosted repository, so every change that we make can be pushed to it.

Commiting our changes and pushing to the repository

For the final part we'll upload our changes to the hosted repository. As we don't have any files in the repository yet, we can create a file called README.md which will have our project documentation and write Hello World in it. Now we'll run the following commands:

We can also download any public (or private if you have access) repository by cloning it or making a fork. By cloning we just download the files to a folder keeping the git remote url, and forking we also automatically create a repository for it. The following code is an example to git clone.

You can fork a repository directly in its page, by clicking in the fork icon on the top right side of the page.

There is much more to Git and Github than we talked about in this tutorial, but this should get you started with code versioning. I really wish you appreciated this tutorial, feel free to reach me out in my social medias if you have any feedbacks!

Once suspended, costamatheus97 will not be able to comment or publish posts until their suspension is removed.

Once unsuspended, costamatheus97 will be able to comment and publish posts again.

Once unpublished, all posts by costamatheus97 will become hidden and only accessible to themselves.

If costamatheus97 is not suspended, they can still re-publish their posts from their dashboard.

Once unpublished, this post will become invisible to the public and only accessible to Matheus Costa.

Thanks for keeping DEV Community 👩‍💻👨‍💻 safe. Here is what you can do to flag costamatheus97:

Unflagging costamatheus97 will restore default visibility to their posts.