The Netherlands is a popular destination for tech talent in Europe, thanks to competitive Dutch salaries, the attractive work-life balance, progressive politics and the advanced digital economy.

As of 2019, there were 320,900 professional developers working in the Netherlands. A recent report released by Startup Amsterdam and the Amsterdam Economic Board found that there were 26 job vacancies per available tech worker. According to CBS.nl, there were approximately 12,300 unfilled vacancies in 2017, with projections of the skill shortage in the EU reaching 700,000 by 2030.

Developers in the Netherlands are generally a happy group

Developers living in the Netherlands are very happy. According to our survey, the average developer happiness is 61/100 — respondents from the Netherlands placed six points higher, ranking in the top three out of all countries surveyed. This is ahead of Germany and even Sweden. 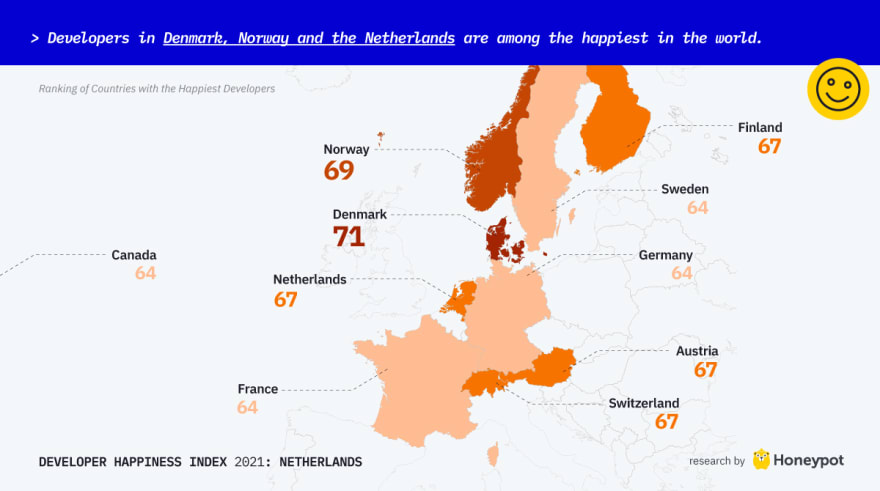 On the whole, developers living and working in the Netherlands are more satisfied across all indicators of happiness compared to the world average. Notably, they are most satisfied with their work-life balance, safety, religious freedoms, transportation, and healthcare. The biggest point difference is with transportation, 19 points higher than the average. Satisfaction falls below the world average when it comes to climate and cost of living. 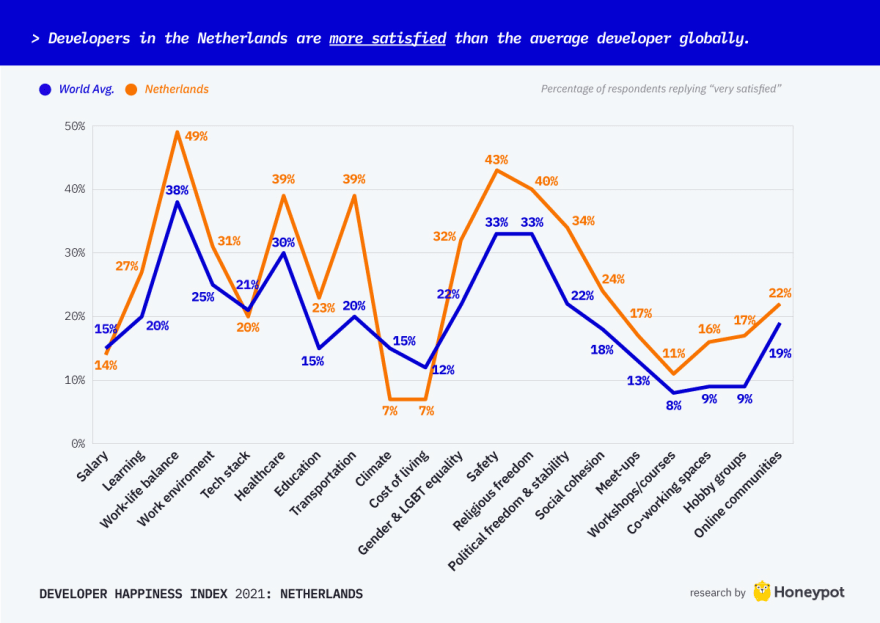 40% of Dutch developers are very happy with their career

48% of female developers described themselves as very happy with their career, compared to 39% of male developers, though when adding together very and somewhat happy, the genders converge again.

Developers in Amsterdam earn the most in the Netherlands

In general, developers in the Netherlands are well paid. The Netherlands ranks in the top ten on a worldscale for developer pay. According to our data, the average salary for a software engineer working in the Netherlands is approximately €44,000. The lowest salaries reported were around €26,000, the highest reaching upwards of €220,000, which reflects technical specialisations and leadership positions.

Average software engineer salaries vary from city to city. According to Glassdoor, salaries in Amsterdam are the highest, while Rotterdam offers the lowest. Cost of living is quite high in Amsterdam though, meaning more monthly expenses comparatively. If you were to factor in annual living expenses (*at face value), you’d potentially earn more in the Hague than Amsterdam.

So how happy are developers working in the Netherlands?

Developers have been clear about what makes them happy at work, and it isn’t necessarily extrinsic factors like salary. In their own words, a healthy work-life balance, the ability to engage in continuous learning and career growth, and being a part of a healthy work environment and company culture are most conducive to their overall well-being and happiness.

Companies racking their brains for ways to increase developer happiness in the workplace, need to simplify their strategy — provide opportunities for developers to speak up and listen to their responses. And take happiness seriously; it's not just an ethical imperative, it's an economic one.

The Netherlands is fast becoming a top destination for #developers!

Find out what a dev career in the Netherlands is like in our latest report 🇳🇱 bit.ly/2JyE8wH

Once suspended, cultbyhoneypot will not be able to comment or publish posts until their suspension is removed.

Once unsuspended, cultbyhoneypot will be able to comment and publish posts again.

Once unpublished, all posts by cultbyhoneypot will become hidden and only accessible to themselves.

If cultbyhoneypot is not suspended, they can still re-publish their posts from their dashboard.

Once unpublished, this post will become invisible to the public and only accessible to .cult by Honeypot.

Thanks for keeping DEV Community 👩‍💻👨‍💻 safe. Here is what you can do to flag cultbyhoneypot:

Unflagging cultbyhoneypot will restore default visibility to their posts.