Today I was asked to provide technical consultation for a customer involving the generation of an XML document.

These days we developers play with JSON, but it is worth noting XML played some influence with JSON’s global adoption. You’ll often hear a lot talk about data models, sequences, markup and so forth in the JSON community – lessons that were learned from putting together XML standards.

It’s been a while since I authored an XML document – I was reminded how the data structures are easier to read and understand. That’s not to say JSON isn’t readable, its just that with XML and it’s SGML derivatives the model is easier to comprehend, initially at least.

If JSON is the preferred choice for data transfer within applications, does XML have anything left to offer?

XSLT (eXtensible Stylesheet Language Transformations) is a language for transforming XML documents into other XML documents, or other formats such as HTML for web pages, plain text or XSL Formatting Objects, which may subsequently be converted to other formats, such as PDF, PostScript and PNG. 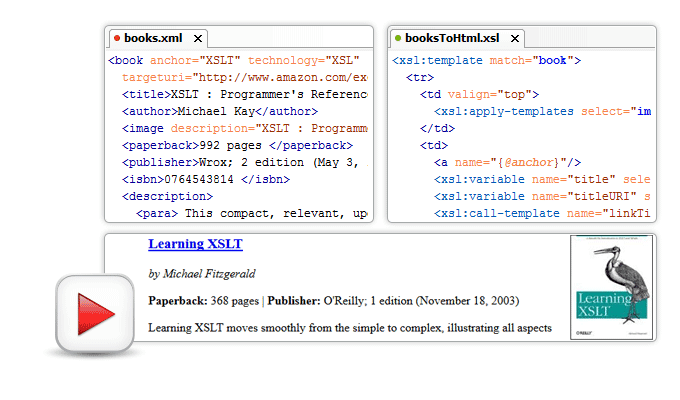 Example of XML/XSLT: In the image above you can see an example of XML and XSLT working together. The XSLT file uses XPath queries to lift information out of the XML document and render the content using templates. The output is shown below.

XML still works best for documents. Documents by their nature have a form of structure that is represented better through XML.

Combine XML with XSLT and you’re able to perform impressive transformations with nothing more than .xml and .xsl files.

Not yet – XML still has its place for document-based structures. Also many financial institutions rely heavily on XML based formats for transferring information between enterprise systems that were built in the 2000s.

It’s well known financial enterprises such as Banks are reluctant to ‘upgrade’ their systems unless they really need to. So XML may not be the new kid on the block, and relegated to more mundane infrastructure but it’s still alive and kicking. 🤓

What about you? - Do you still use XML day to day?

What are your best tips for getting a first developer job?

Once suspended, dalbirsingh will not be able to comment or publish posts until their suspension is removed.

Once unsuspended, dalbirsingh will be able to comment and publish posts again.

Once unpublished, all posts by dalbirsingh will become hidden and only accessible to themselves.

If dalbirsingh is not suspended, they can still re-publish their posts from their dashboard.

Once unpublished, this post will become invisible to the public and only accessible to Dalbir Singh.

Thanks for keeping DEV Community 👩‍💻👨‍💻 safe. Here is what you can do to flag dalbirsingh:

Unflagging dalbirsingh will restore default visibility to their posts.