I've been a professional programmer for the last several years. During this time I've risen rapidly through the ranks. I started as an intern, but I'm now the Lead Engineer responsible for a suite of products that serve over 160,000 people in over 140 different countries.

Recently, I took a look back across all the code I've written during these years (that I still have access to). I've written production code in a huge variety of languages, through Haskell, Scala, Go, Python, Java or Javascript. Across all these, I noticed one significant trend: I pretty much never use the ELSE statement.

I realised there's a clear rationale behind my aversion to else statements though. I believe that they shouldn't be used, and should be treated as a code smell instead. There are two reasons I think this: else statements break the line-of-sight rule, and they always lack context. I'll explain these two points in detail before showing how you can avoid using else statements.

I'm a firm believer that code should be optimised to be read by people in the future, rather than being optimised for being executed by machines. In this, I echo Donald Knuth's sentiment:

“Programs are meant to be read by humans and only incidentally for computers to execute.” - Donald Knuth, The Art of Computer Programming.

The problem is the ability to read code is subjective: it's hard to define exactly what makes code readable. One rule that seeks to clarify this though, is the line-of-sight rule. This is a popular rule in the Go community. Mat Ryer defines it concisely in his talk and article. Simply stated, this is the idea that the ‘happy path' in code should be indented as little as possible. 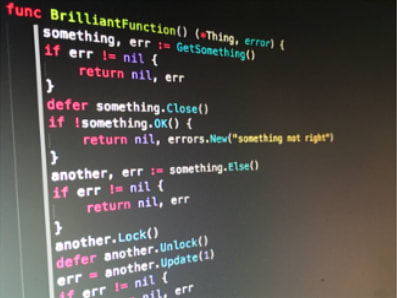 Contrastingly, any error handling or special case code should be indented further. 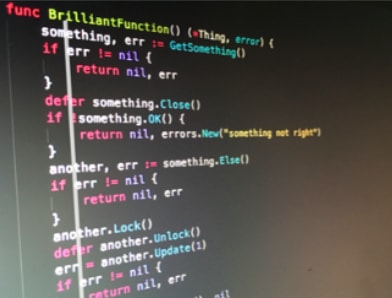 So how do else statements relate to this?

Else statements are problematic as they force code down a level of indentation. It suddenly becomes unclear what code relates to a ‘happy path', and what a special case really is. 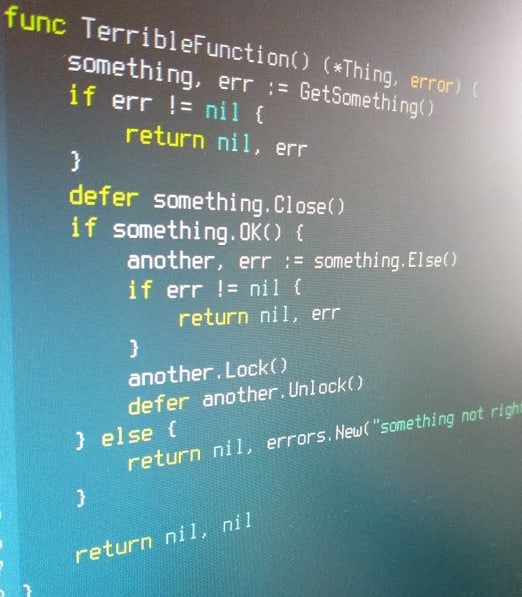 This lack of clarity makes the code harder to scan through, and hurts the readability.

The ability to quickly and efficiently scan code is super important. Digesting small sections of code in isolation is a key part of this. We don't want to always have to read every line of code to understand a small part of a codebase.

Else statements make this harder as they space out the if condition and the code that is affected by it. This is best explained through two examples. First, can you tell what happens when these three lines of code are run?

Hopefully, this is fairly obvious. Let's take a contrasting example though:

We can see that without the if statement, we can't determine what this is meant to be doing. Why would it return an empty string? Is this an error, or the ‘normal' behaviour? This code instead relies on us remembering, and having read, the earlier context. This doesn't matter much when the statements are small, but if there's complicated logic within the if { … } block or we are scanning quickly, then the separation of context from code can hurt readability massively. It hurts even more when if/else statements are nested, or there are multiple of them in one function (which if statement is this else for?).

How to remove else statements? #

Now we've agreed that else statements are rubbish. But that's not much help by itself. The real trick is how to avoid them. Thankfully, there are two simple ways to do this:

This is the most common instance I come across. It can take two forms too - one where the else is implicit, one where it is explicit. The explicit version looks like the following:

The implicit is similar, but without containing an else statement per se. Instead, the else is implied by simply dropping off the end of the function (this one is more common in Python or JavaScript, where None or undefined are returned if nothing is explicitly stated).

Again, this isn't super clear what the full extent of the behaviour is. Without reading the whole function, the return values aren't clear.

By simply inverting the if condition, we can solve all these problems though.

We can now scan this function and clearly see the indented error condition and normal flow, satisfying the line-of-sight rule. The behaviour is fully explicit, and we have no separation of context. This is much better.

We also get else statements that don't directly result in a return. This is usually through some special-case logic that isn't isolated properly. For example

This helper function neatly encapsulates all the logic we'd need, removes the need for any else statements, and does a much better job of keeping the happy-path code to the left. This is much easier to scan through, and much more readable as a result.

Else statements are a weird code smell. They harm the readability of any code by forcing equal levels of indents for error handling and for happy paths. They also have the unique ability to separate code from the logic that affects it. They are easy to avoid through the two techniques of returning early and splitting logic into helper functions. As a result, they are unnecessary. You can write better code and be a better programmer by never using them.

Some caveats (to stop the pedants).

Once suspended, dglsparsons will not be able to comment or publish posts until their suspension is removed.

Once unsuspended, dglsparsons will be able to comment and publish posts again.

Once unpublished, all posts by dglsparsons will become hidden and only accessible to themselves.

If dglsparsons is not suspended, they can still re-publish their posts from their dashboard.

Once unpublished, this post will become invisible to the public and only accessible to Douglas Parsons.

Thanks for keeping DEV Community 👩‍💻👨‍💻 safe. Here is what you can do to flag dglsparsons:

Unflagging dglsparsons will restore default visibility to their posts.