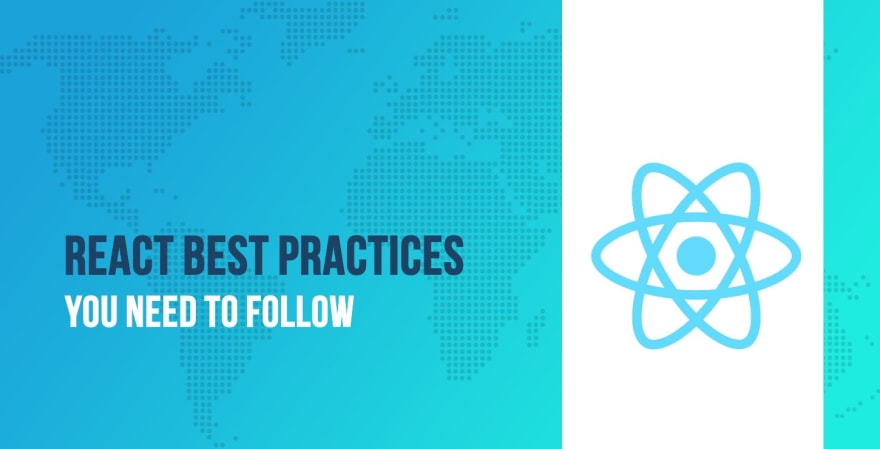 Writing a clean react code is definitely a hard task for any new developer but using React best practices will gradually build up your confidence to write better code in the easiest and fastest way.

In this article, we are going to focus on the 10 best practices every react developer should follow to be a better developer.

React is an easy-to-use, declarative, and component-based framework used for building highly interactive user interfaces. It is a popular frontend technology introduced by Facebook, which currently has 8 million users worldwide.

However, for developers, it is crucial to follow some fundamental practices concerning the technology to get complete advantage of its features and to keep code clean and organized.

For example, In React you can reuse code and design components that save developers time. But while creating components developers need to follow some basic rules to make it reusable, otherwise, it can lead to a complete mess.

1. Break larger components into smaller ones

Separating components will help us to read, maintain, debug, reuse and scale code in long run, as the project keeps on getting bigger and bigger with time due to the addition of new features.

2. Use Functional Components instead of classes

If you are new to react you might get confused about what to use, functional component or class component.

Here is the answer!

Here are the benefits of using Functional components:

3. Choose styled-component over other CSS-in-JS libraries

Style-Component is one of the most preferred libraries that provides an easy way to use CSS in modern JavaScript. It enables developers to write CSS which is nicely isolated per component while preserving the full power of cascading.

Some pros of using style components are:

4. Follow React way to Create separate folders for all files related to each component

Follow the React way of structuring a React app. A properly maintained folder and file structure help you to understand project flow and simplify code maintenance and extraction to any other project.

Organize files according to components, if there are several small components used by another big component, keep all the related components within that another component folder only and maintain the same hierarchy in the entire project.

For example, the Form component has small components such as CSS files, icons, images, tests, and other sub-components all these should be placed in one folder.

According to React document, Key props help react to identify which item has been changed, added, or removed. Therefore, the key should be given to the element inside the array to give the elements a stable identity.

So what will happen if you use indexes as key props?

React uses key props to determine what to render or re-render, as react doesn’t waste time in rerendering duplicates. Thus, when the two elements have the same key one will be omitted by the React.

Another thing to worry about is, React also re-renders elements whose key has changed for a specific element content though the actual content hasn’t been changed.

6. Use default props and prop types

In JavaScript, you can not set the variable and parameter to a particular type. So there is a chance of variable type misinterpretation.

Further, JavaScrip doesn’t allow setting default properties to the objects or components, or to specifying which properties are required and which are optional in React. This will lead to an issue if you forget to assign property to an object or component that is required.

Both the above problem can be solved using prop type and default props. It also helps to improve your code quality making it much safer and faster to test and debug.

Using props to generate the initial state component often leads to duplication of “source of truth.” This is because getInitialstate is only invoked once, at the time when the components are first created.

When you make the changes to the props next time on the component, it remains unchanged because the previous value will not be updated. The problem can be solved by avoiding the use of props at the initial state.

To minimize the component complexity it is always a good practice to isolate your stateful data-loading logic from the rendering stateless logic.

Following naming conventions ensures users know how to name digital assets so that they will remain consistent and correct. They help in file organization and management, without naming convention handling code assets can be very difficult.

In react, there are mainly three naming conventions,

10. Write tests for the entire code

Testing ensures code integrity. Therefore it is good practice to create a Test directory within your component’s directory to perform all the required tests and ensure that the addition of new code will not break the existing functionality.

Here we have covered the 10 best practices React developers should follow to implement clean code, simplify code maintenance and testing.

Hope all these best practices will help you to create a clean and well-organized React project and avoid any issues in the long run.

Check out my other useful blogs,

“If you are finding the best way to build a quality web or mobile application then start using DhiWise- The world’s first ProCode platform to speed up your app development supporting latest technologies such as Flutter, React, Node, Kotlin, iOS, and Laravel.”

JavaScript Arrays & Array Methods | Everything you need to know