Since its initial release in May, a lot of powerful features have been added to timetrace, a simple time tracking CLI. I'm going to introduce some of the features present in timetrace v0.10.0 in this article.

If you're on macOS, you can simply use Homebrew:

timetrace is available for all major platforms. Check out the installation instructions and pick yours.

Basic usage: If you're new to timetrace, Tracking my working time using timetrace might be a good read. There also are detailed examples and the CLI reference.

With version 0.7.0, support for project modules has been added to timetrace. Project modules are sub-projects of an existing project.

For example, we could create a project called make-coffee:

Project modules are the exact same thing as projects, expect that they can be associated with a parent project. This association is marked by an @. For example, grind-beans@make-coffee is a module of the project make-coffee. Therefore, creating this project is fairly simple:

timetrace recognizes those modules. For example, when listing all records for a given project, its modules will be included:

To view all projects along with their modules, just run timetrace list projects.

🔥 Revert changes to projects and records

timetrace v0.8.0 introduced the --revert flag for the edit project, delete project, edit record and delete record commands. It allows to restore the resource prior to its modification.

Oops! That shouldn't have happened. Let's restore the state of the project prior to the delete command:

The --revert flag reverts the change introduced by the previous command, thus our project exists again.

Edited or deleted records can be restored the exact same way. The following command will edit the newest record and lengthen it by 1 hour:

This will increase the end time of the records by 1 hour.

Hint: To get a list of the available records of today and the record key for editing them, use timetrace list records today.

If this was a mistake, reverting the previous command is very simple:

The end time of the record will now be the same as before.

The timetrace status command got some love with timetrace v0.9.0 and v0.10.0, addressing some requested features.

First of all, status now not only calculates the overall work time of the current day but also the overall break time. How long have you been taking breaks today? Take a look at the right column! 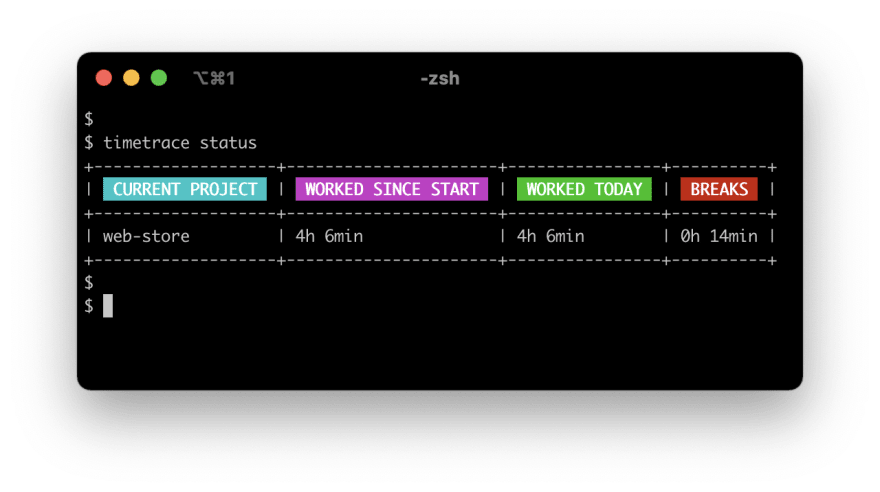 It is also possible to print the tracking status in your custom format using the --format flag. There is a pre-defined set of variables. For example, {project} will be replaced with the name of the current project.

To print an output like Currently working on make-coffee - Worked today: 2h, issue the following command:

Another new option is --output. It allows the users to specify an output format. The default is the table shown above, but it is also possible to output the same data as JSON:

This will produce the following output:

Note that the JSON keys are the same as the formatting variables used by --format.

Now you're good to give those features a try, bookmark the project or provide some feedback!

Once suspended, dominikbraun will not be able to comment or publish posts until their suspension is removed.

Once unsuspended, dominikbraun will be able to comment and publish posts again.

Once unpublished, all posts by dominikbraun will become hidden and only accessible to themselves.

If dominikbraun is not suspended, they can still re-publish their posts from their dashboard.

Once unpublished, this post will become invisible to the public and only accessible to dominikbraun.

Thanks for keeping DEV Community 👩‍💻👨‍💻 safe. Here is what you can do to flag dominikbraun:

Unflagging dominikbraun will restore default visibility to their posts.