Typescript is a typed superset of JavaScript and was created by Microsoft in 2012 to aid Javascript developers with large-scale applications. Typescript was designed to help as a structuring mechanism for large codebases because it helps avoid common errors that would slow you down. It makes it easier for teams to work on the same project, as the language allows for modification and produces readable code. If there are multiple developers working on one project, Typescript can prevent a lot of wasted time on debugging.

This language allows us to use our Javascript skills more effectively. In fact, after you compile your code, all the Typescript stuff goes away and produces clean, cross-platform safe Javascript code. On top of being interoperable, Typescript adds unique features, including static typing, interfaces, classes, and more.

Javascript is a dynamic scripting language used to make interactive web pages, so it’s not designed for complex applications. Typescript, on the other hand, is a static scripting language that is a superset of Javascript, meaning that it is an extra layer on top of your JS code. Typescript was not designed to supersede or replace Javascript. In fact, it never overrides existing behavior. It takes the existing behaviors of Javascript to correct its limitations and leverage common issues with the language.

There are many differences between Typescript and Javascript. Here are just a few:

Why should I use Typescript?

There are many important benefits to using Typescript. Let’s break them down.

Typescript catches mistakes in your JavaScript code earlier on. Typescript has the ability to catch bugs and errors before runtime, so you’ll write reliable code and mitigates the pitfalls of JavaScript that are only found at runtime.

Now that you have a grasp on the basics, we’re going to teach you everything you need to know to get started with Typescript today.

You can get access to Typescript either by installing TS Visual Studio Plugin or using NPM (Node Package Manager).

After installing NPM, write the following command in terminal to install TS.

To check what version you are using, run the following command line in a shell

Typescript Compilers
To compile TS code, we run the command tsc filename.ts. This will create a JS file of the same name, so we can eventually use it on the browser.

Types
As the name suggests, everything in Typescript deals with types. Since Typescript is the typed version of JS, we can specify types to variables when they are declared. This makes your code more scalable and reliable, and you can check that your code runs properly before runtime.

If you’ve worked with Javascript before, you know that it has eight types: string, number, null, undefined, object, symbol, bigint, and boolean. Javascript is dynamically typed, which means that it doesn’t know the type of your variable until runtime and variables can change their type. Even if we change them intentionally, errors and bugs often arise. Typescript helps with this problem by adding static types to the code.

There are three categories of types in Typescript: any, Built-in, and User-defined.

Let’s dive into each of those a bit more and how to use Typescript types.

To assign a type in Typescript, you need a colon :, the name of the type, an equal sign =, and the value of that variable. Let’s look at an example.

Boolean values function just like they do in Javascript.

In Typescript, arrays are a collection of the same object. You can declare a typed array in two ways, either with the datatype followed by [ ], or the generic array approach with Array<elemType>.

Tuples are a lot like arrays, but we can define the type of data that are stored in each position. Tuple types enable you to make organized arrays. You can express an array when you know the type of a fixed number of elements and predefine your types in order.

Void
Void is a subtype of undefined. It is a return type that can be substituted with different types when needed. Void is used when we are returning functions. It essentially tells us that a function will return undefined. This ensures that a function does not return a value.

Enum
Enums allow us to define a set of named predefined constants. These are defined with the enum keyword. You can define a numeric or a string enum.

String
Typescript follows the same syntax of Javascript with double or single quotes around text. You can also use the backtick character to use multiple lines or the ${expression} to enable evaluated operations inside a string.

Like most programming languages, we use variables to store values, such as a string, Boolean, number, or expression. In Typescript, we can define a variable using var, let, and const. There are some issues that arise when we use var. For example, a variable declared with var inside a function is function-scoped but global-scoped when declared outside a function. This can lead to errors in the JavaScript code.

The keyword let solves this problem by setting the variable’s lifespan at the block where it was declared. Similarly, const solves the same problem as let, but it can only be initialized once when it is declared. Typescript will make sure no value can be set.

Variables in Typescript follow similar syntactic rules as many other programming languages.

Typescript introduces a special syntax. If you add /*!, Typescript will keep the comment while transforming into Javascript. This enables you to keep copyright at the top of a TS file that needs to be generated in JS.

Type Inference is what the compiler uses to determine different types. It is smart enough to figure out types from their values. That way, you won’t have to specify your types in your code. This a powerful feature of Typescript that allows you to manipulate types and combine them.

The Typescript inference features can infer types in the following scenarios:

Typescript does not make any major changes to the function-scoped core of Javascript. However, Typescript does enhance functions with strong signatures we can use to define parameters and return types.

We declare a function using the function keyword. You can also use the fat arrow to make a function without the keyword. This does not change with Typescript. We can use Typescript types for function arguments. We use a colon to do so. Take a look at an example:

This functionality enables you to create a new type from an existing one. For example, you could have an existing interface keep all the same members but change into read-only or optional. Before the mapped type, we would have to create an extra interface to reflect the final state we want, which can pollute the code and lead to issues.

And without the mapped type, every interface would require a separate function, so things can get out of control quickly. Thanks to the custom logic of a mapped type in Typescript, we don’t have to deal with those issues.

Typescript supports object-oriented programming and adds new features to improve upon Javascript’s OOP functionality. Typescript supports the use of classes by using the class keyword. Think of this like a template of objects. Let’s take a look at an example:

This will generate the following JavaScript code:

Typescript introduced new ways of using objects. There are many different object types in Typescript: Object, object, and {object}. Typescript can create an object using curly brackets, and you must define its members at initialization. It’s a quicker way to organize your data, and you do not need a name since it’s not a structural language.

Let’s look at how we can check that our variable has the right type. Here are the two most common approaches.

This operator can check for custom types not defined by Javascript. Below, we first write a custom type, make an instance of it, and check that it is indeed the right variable.

This operator can check for basic datatypes. Below, we make a string variable, use the typeof command to check it against another variable and then print the result.

Sometimes, we need to cast our variables to a datatype, commonly when you are using a general type and need to make it more concrete. There are a few different ways to do this. Let’s discuss two popular approaches.

Use the as keyword after the name of the variable and end it with the desired datatype.

We can also cast our variables by using the < > operator. This has the same effect on our code but implements a simpler syntax. 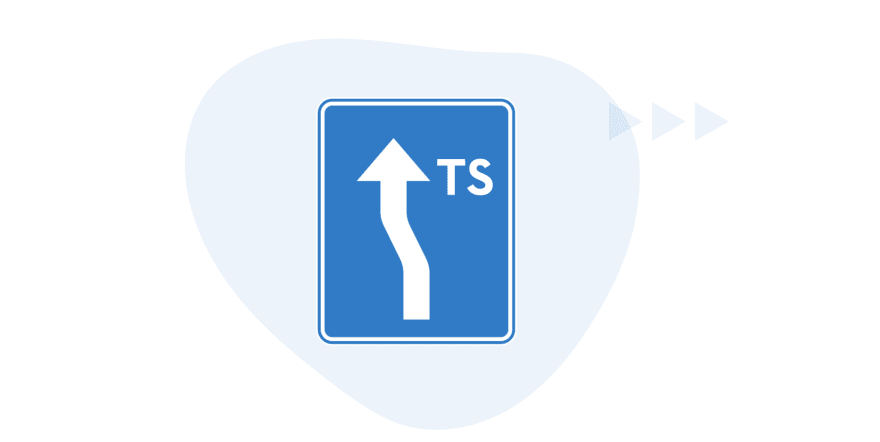 Now you have a basic sense of how to use TypeScript, and you can see how it will make your Javascript code less prone to bugs. You’re ready to move on to more advanced concepts. Since Typescript is gaining more momentum in the web dev world, there are tons of great resources out there for those who want to get started and revamp their front-end career.

The most robust course for those looking to master Typescript is Learn TypeScript: The Complete Course for Beginners by Patrick Desjardins, who is a Senior Netflix engineer and former Senior Microsoft engineer with over 20 years of professional development experience. This interactive, hands-on course walks from the complete beginner to the advanced concepts of Typescript, like iterators, manipulating objects, and more. It’s a one-stop-shop for any frontend developer who wants to keep up with this must-know language.

Setup jest from scratch in a vanilla js project.