Docker is a great tool that helps developers build, deploy, and run applications more efficiently in a standardized way. For frontend applications, we only need the Docker image for local development, because we deploy it to a static hosting provider. In this case, can we live without a custom Docker image? Can we have the same development experience that we had without Docker? Yes, it is easier than you think.

Assume an application where we only have to press start, and everything is running. This setup can be any application generated by the React, Vue, Angular CLI. For demonstration purposes, I'll use my Vue Todo application.

During development, we will be doing the following steps:

If you search the web for frontend development with Docker, you can find many articles using a custom Docker image. Let's have a look at and see how it works. 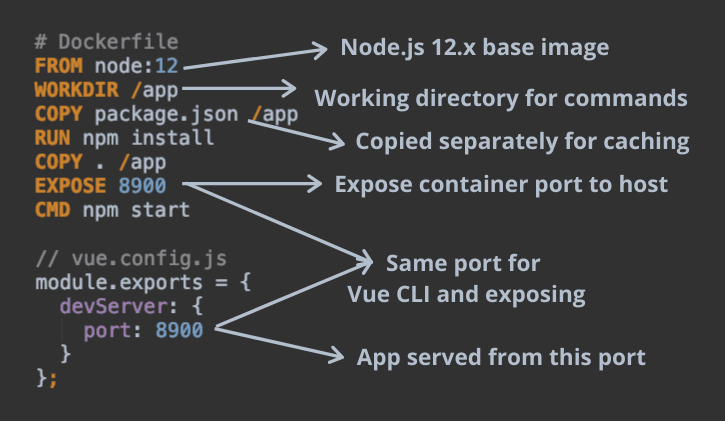 The Docker file starts with defining the base image (Node.js 12.x) on what we will build upon (FROM) and setting the working directory to the /app folder (WORKDIR). Every command starting with RUN or CMD will have this folder as the default working directory.

The next step is to copy the source files (COPY) and install the dependencies. We copy the package.json separately from the rest of the files. Why? Because Docker caches every step of the Dockerfile when building the image multiple times. When don't modify anything and build the image again, it won't do anything as the steps are cached. If we change a Javascript file, Docker will run the commands from COPY . /app. When we modify the package.json file, Docker will rerun the commands from COPY package.json /app.

By default, applications running inside the container on a specific port are not available on the host machine. We have to make the port available (EXPOSE). Only after this can we type the URL in our browser (http://localhost:8900) and see the result.

To run this image, we have to build it and run the created container.

The above Docker image works but has multiple drawbacks:

Docker can build single images and run the built containers. Docker Compose steps a bit further as it can build and run multiple images at the same time. In this tutorial, we won't be using the numerous build capability; we'll use it only to overcome the disadvantages of the previous example.

While we can use the previous Dockerfile to run with Docker Compose, we will use it in a way to skip the writing of a custom image. 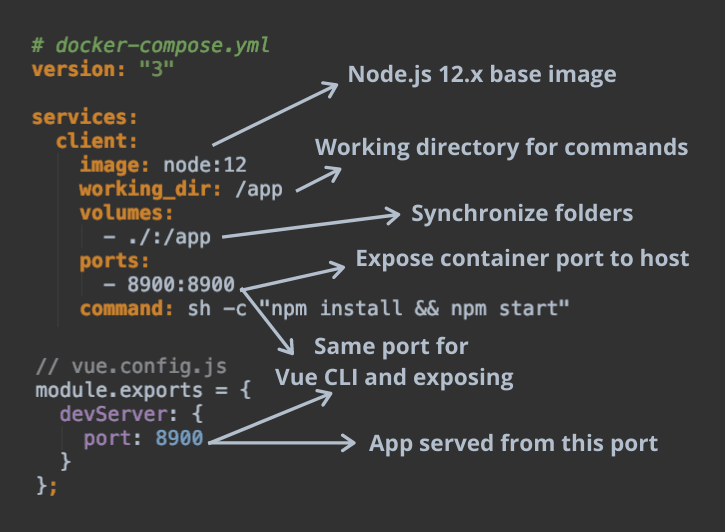 Instead of defining the image with a sequence of commands, Docker Compose uses the YAML config file format. Under the services key, the image for the Vue application is named client. It is the equivalent to the naming in the docker build -t <image-name> command. The description starts the same way here: defining the base image (image) and setting the working directory (working_dir).

The key difference comes from the volumes property. By using it, the local folder is synchronized with the container. If we execute the npm install command in the container, the node_modules folder will appear on the host machine also: we get the code completion and the lock file.

To run this setup, we have to build it and run the built container.

If you look at the two solutions they are nearly identical. There is a great correlation between the commands in the Dockerfile and the configuration fields in the docker-compose.yml config file. The only difference is how they handle mounted files and this is what solves our synchronization issue.

When doing local development it is important to have a fast feedback loop and code completion. If we go with the pure Docker solution we lose both. We have to ask for the help of Docker big brother Docker Compose to help us with its folder synchronization. By migrating our setup to Docker Compose we get back the speed and code completion. I hope this trick helps you and saves a ton of development time.

Special thanks to iben for helping me with the setup.

Emarsys Craftlab
We love developing, do you share our passion?

We are a team of highly motivated, international colleagues who like to hold a meeting over a game of ping pong every now and then. - Interested?

Once suspended, emarsys will not be able to comment or publish posts until their suspension is removed.

Once unsuspended, emarsys will be able to comment and publish posts again.

Once unpublished, all posts by emarsys will become hidden and only accessible to themselves.

If emarsys is not suspended, they can still re-publish their posts from their dashboard.