You person one, were hired as a backend developer. You specialize in PHP, Python, C#, C++ and more of them. None of which are related to frontend. You rock in your position. But one day you are asked to do the frontend too. So you learned jQuery a bit. Did the frontend in the crappiest manner because that's not your field. Several years later, you are a fullstack developer.

You person two, were hired as a frontend developer. You specialize in your stuff. Turning PSD and design concepts into awesome html and css, making everything interactive, all are your job, where you shine. But recently the backend developer quit and they are suddenly in need of someone to patch things a little bit. Since you are their only developer who is known to be expert, you end up learning a bit of the backend and patching things up. Several years later, you are a fullstack developer.

Be it person one or person two, the story ends up same way. The company expects you to fill up the missing stuff. You are no longer specializing in your creative part, you are doing two separate tasks. And we did not even mention the horror about managing the server, testing and deployment.

Back to main point. Full stack developer is a scam term. If you compare the salaries and the tasks you have to deal with, you will end up earning same or even less than you are currently earning. 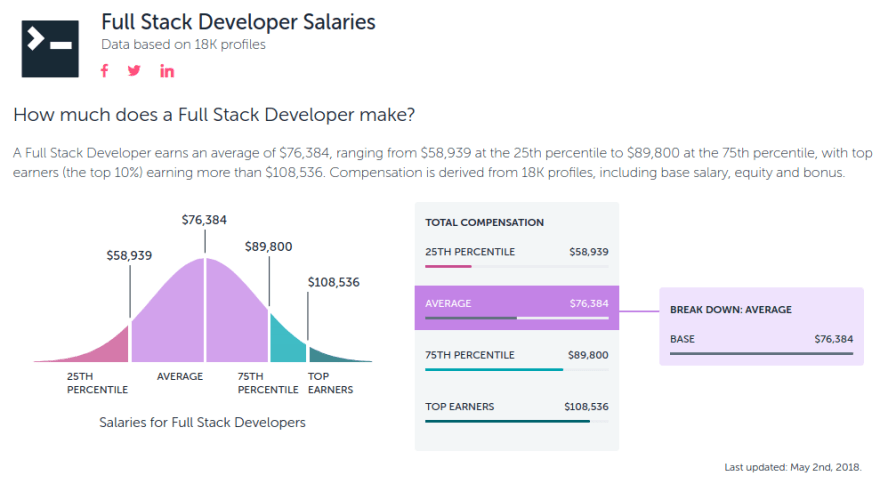 This will vary on salary database sites like glassdoor, but the end result will be same.

That is horrible. You are a jack of all trades right now. You deal with react, express, redux, docker, ci/cl, aws, and thousand of other stuff. You know more than others yet you are paid even less than all.

This is scam, this is a myth, that's everyone agrees upon. The greatest scam where you are paid less for doing more. Even if it's the same hour you work, even if its same 8 hours job. You are expected to solve all of their problems while getting less and less amount of salary.

They use code words like, "be more flexible", which means you must do more, stay up late night, and ofc will get less payment because you were meant to be flexible.

They also use code words as seen on Developer recruitment: how to read job adverts post, "Full-stack developer required", "A work-hard, play-hard ethos", "Salary is competitive", "A company driven by results", "Ability to multi-task". Seriously, what's wrong with the world?

Do you see what the end products look like? It doesn't have any unit tests, it is bad, broken, and volatile. The code is really messy because you are to focus on multiple things at same time and you are just one person.

If you are a backend developer, and do not want to dive into frontend, it's best to remain clear about it rather than being turned into such slave. Same with frontend. You can see how these guys are scamming best out of everyone for sake of their own profit. They are scamming the clients by taking huge amount of money and providing a broken service, they are scamming developers by paying less than what they deserve, they are toxic, they are ruining the web industry.

Answer me this, did you start programming as hobby so that you can become a slave to such people?

I'm not the only one to talk about it, this issue has been addressed many times on past like,

Full stack developers have their existence and need. They can be the bridge between frontend and backend developers of the team. It means the team must have backend and frontend devs and to have a better understanding they should hire full stack developer. They exist by many names, better names, one of them are called project manager.

Every coin has three sides. Head, tails and an almost non-existent thin side. The era of full stack has done it's job. Time for something else, something more shiny...maybe machine learning?

EDIT NOTE: I am a full stack developer myself, I love programming, and I like both frontend, backend, I like devops too. Considering all that this post might seem contradictory to many. It lacks lot of details but I am pretty sure there are many who will agree with me as to how the terms are abused for sake of some third rated peoples. The top tier might be in very good shape and getting really great salary, but the other tiers are the ones who is being tricked.

Once suspended, entrptaher will not be able to comment or publish posts until their suspension is removed.

Once unsuspended, entrptaher will be able to comment and publish posts again.

Once unpublished, all posts by entrptaher will become hidden and only accessible to themselves.

If entrptaher is not suspended, they can still re-publish their posts from their dashboard.

Once unpublished, this post will become invisible to the public and only accessible to Md. Abu Taher 👨‍💻.

Thanks for keeping DEV Community 👩‍💻👨‍💻 safe. Here is what you can do to flag entrptaher:

Unflagging entrptaher will restore default visibility to their posts.