Activek8s is a gem that relies on certain conventions to provide a thorough Kubernetes integration on a set of Rake tasks. The gem is a byproduct of a project that makes use of Kubernetes to orchestrate our services and other tools (Redis, CI/CD, logging, etc). This is not the absolute truth, it's only a solution that worked for our team and we open sourced on GitHub.

For all of us actively relying on Kubernetes, we tried to find a way to integrate with it and flatten the learning curve so our team can focus on solving the problems they already know how to solve, instead of diving deep in the "Kubernetes universe".

Our team works mostly on Rails, so my solution was to wrap the somewhat complex & low level kubectl commands with Rake tasks. The tool is intended to rely on a few conventions while trying to maintain a high degree of customization.

There are certain situations where being handy with kubectl can get you a long way, but even more critical than that, someone that isn't handy with kubectl will be absolutely helpless and unable to solve simple problems. These are the tasks Activek8s is able to perform:

NOTE: In the previous feature list, the term "service" refers to any Dockerized project. The project can be coded in any language or framework, it doesn't apply only for Rails apps or even Ruby based projects, as long as you can build a working Docker image out of it you can manage them using these Rake tasks.

How to deploy and rollback

The "in detail" documentation can be found in the project's README. But a simple deploy will work with the following command

Let's say this last deployment introduced a regression bug. You can manually rollback using the same deploy command as simple as:

In our team we rely on these same Rake tasks within our CI and just like that we get Continuous Deployments within our pipelines (we use Drone CI because of their amazing Docker support, kudos to them).

You can also delete a deployment from a cluster by running rake k8s:delete['production','prod-49'].

In my opinion this is the most interesting functionality in the gem. When working with SOA/microservices you have to deal with a higher complexity system, so what if you want to debug a problem within your staging or development environment?

I'll explain our most common use case with the following hypothetical diagram: 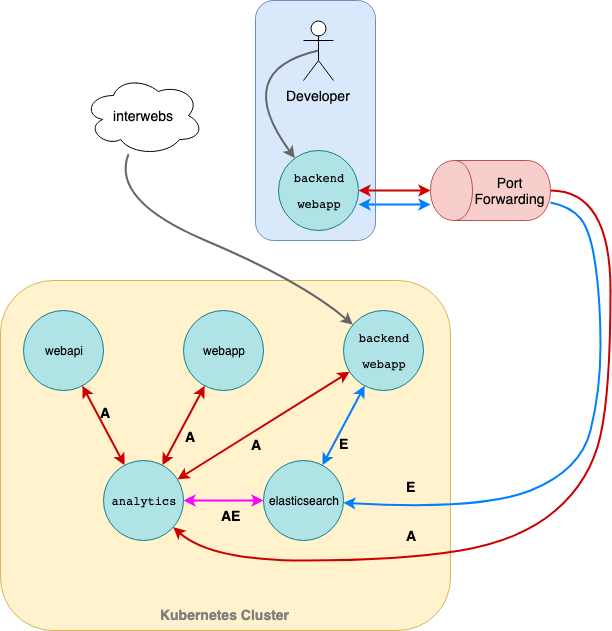 Imagine a backend webapp project that relies on two other services (analytics & an elasticsearch deployment). Communication is done via HTTP and both URLs for them are set using an ENV variable, nothing fancy or new here.

Inside the Kubernetes cluster, the URL might look something similar to http://analytics.dev.svc.cluster.local:3000. In this case, the developer can execute rake ak8s:port_forward and they will find a services.env file on their root dir with an ENV variable export file you can source with . services.env.

This allows their local backend webapp to communicate directly with the services in that development environment, just like if it were deployed alongside them in the cluster. This is done by using an .ak8s.yml configuration similar to the following snippet:

We've found this to be a much easier way to get your toes dipped in Kubernetes land. Our team has learned about the dynamics of Pods, Services, Deployments, ConfigMaps, Secrets and lots of other more in-depth terminology at their pace.

The most important takeaway is that we haven't lost productivity along the way and they feel comfortable interacting with a Kubernetes cluster of interoperating services. All of this faster than they would've by starting out using low level tools directly.

There's plenty of important features we want to add in the project, but feedback from others is what we lack despite reaching this comfort zone. Some of them are:

Again all feedback is appreciated, feel free to browse around our on our GitHub issues.

We might be falling into anti-pattern architecture, or even re-inventing the wheel in some way (*cough* Helm *cough*) but we've found this sweet spot that works for us.

By open sourcing it we can only hope to improve the project more than we can behind closed doors by ourselves. Hope it helps in any way possible, Pura Vida.