What if your playlists were ordered by track similarity? No Taylor Swift followed by death metal, we can rearrange tracks in terms of loudness, mood, tempo and other factors. Naturally, we could also create many playlists that each contain only one type of music, but where's the fun in that? Let's get down to some data analysis with Python and Spotify. Their Web API contains lots of neat features, including the ability to analyse songs and manipulate a user's playlists.

First, to get us up and running, we'll need access to the API. This is done by authorising our application to have access to our own Spotify account. If you want to follow along, we are using a client library for the API, Tekore, to make interacting with it a lot easier. For the sake of brevity, I won't explain details about the API here, but more information can be found in Tekore's documentation.

Once we've retrieved the token, we are free to use the API. So let's start by pulling tracks of a playlist and analysing them. You can swap in your own playlists of course. The ID of a playlist can be retrieved by right-clicking a playlist and choosing "share > Spotify URI" and deleting everything else before the actual ID.

analysis contains audio features for each track in the playlist. They look like this:

Now we can get to the good stuff. Let's first choose the most important aspects of songs to be considered similar. You can choose your own and see how the results change. For me, duration, key, liveness, mode and time signature are second-class citizens when compared to the other features. Let's select everything else and convert the features into a NumPy array for easy numerical operations.

It is important to note that while other features chosen above are between 0 and 1, loudness and tempo have much larger scales. Normalising them keeps things balanced when choosing the song ordering. We'll also use Principal Component Analysis to bring the problem dimensionality down to two for easy visualisations.

So... How can we represent and solve the problem of transitioning from song to another smoothly? Well, it's in the title already, so I'll cut to the chase. Since we have this data available, we can represent each track with its distance to each other track. And how can we most efficiently transition through each track? By minimising the total distance "travelled" once each song is played. Sounds a lot like the Travelling Salesman Problem. It's a hard problem, but for small numbers of tracks we can do it quite effectively by using an approximation algorithm, two-opt for example. I'll provide my implementation here, though figuring it out is a good excercise.

Now we can use it to solve the optimal route, or at least our best guess at the optimum. First we'll construct the distance matrix, then feed it to the algorithm. If you have a large playlist, you can set the threshold argument to reject the smallest improvements to the route to hopefully speed things up a bit.

Visualising results is important. Let's see how our algorithm performed. We'll plot the PCA-reduced data and the chosen path along with song names.

And it seems indeed that the playlist was ordered successfully: 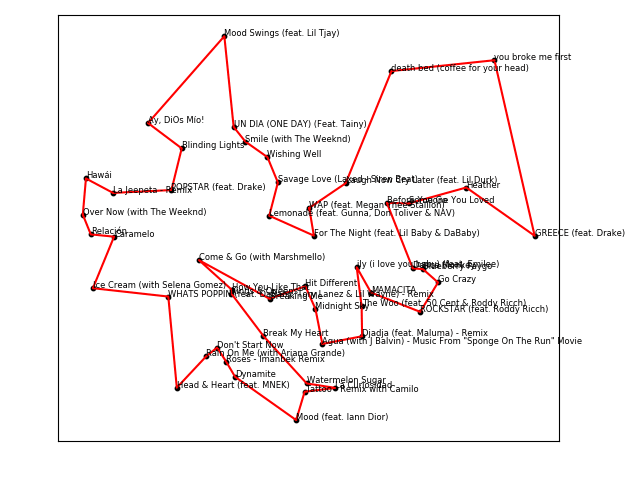 I don't know much about these songs, but running the algorithm for my own playlists convinces me that it is doing the right thing! Finally, we'd of course want to listen to this version of the playlist. Let's create one that has the new song order.

That's it, I hope you enjoyed following along and had some fun!

How to build an Online Meeting Platform?

The limitations of JavaScript as a programming language

Once suspended, felixhilden will not be able to comment or publish posts until their suspension is removed.

Once unsuspended, felixhilden will be able to comment and publish posts again.

Once unpublished, all posts by felixhilden will become hidden and only accessible to themselves.

If felixhilden is not suspended, they can still re-publish their posts from their dashboard.

Once unpublished, this post will become invisible to the public and only accessible to Felix Hildén.

Thanks for keeping DEV Community 👩‍💻👨‍💻 safe. Here is what you can do to flag felixhilden:

Unflagging felixhilden will restore default visibility to their posts.