Programming is all about doing the same thing... over and over again, ad nauseam. No, not the computer, the poor programmer as they work on similar projects bouncing around all the different tools.

For example, let's take Drupal development - usually once you are in the midst of it, you may be accessing:

That may end up looking a bit like this: 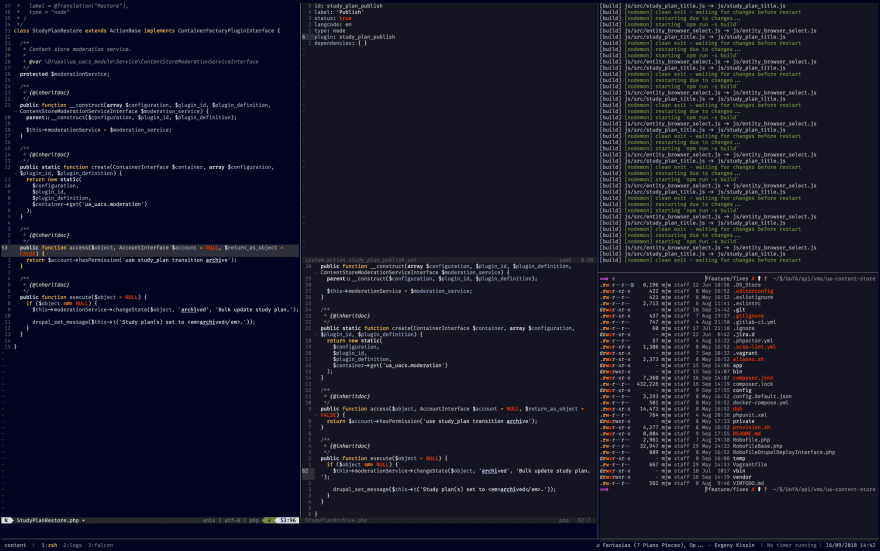 Note the Tmux status, bottom left, where it shows that I am in the first window of three.

As this is typical, wouldn't it be nice if, I don't know, you could run a command such as tmd <name of session> and it would set everything up just so. Also, over time, we could then refine this setup and get all the benefits of finessing it - or have multiple scripts depending on the type of project.

No problem, take a look at this script drupal.sh:

The process can be broken down as follows:

Creating a new session is as simple as tmux new-session -s <name-of-session>. In the example script I have a bit more going on:

What I am doing here is getting the current screen resolution and then creating a detached session of that size - the reason being that if you don't specify a size using the -x parameter then if you try to specify window split sizes it will wig out since it has no point of reference for "size".

Creating a window can be accomplished via tmux new-window -n <name-of-window>. In the example we have:

Here we create three windows - the -t flag is so that we can specify the target of the windows, which in this case is the session that we just created and the index of where they should appear.

We can then target windows with tmux select-window -t <name-of-session>:<index> for further commands.

Often you will want to split up a window into multiple panes. This can be done with something like tmux split-window -h -p<percentage> where -h signifies a horizontal split (guess how a vertical split is specified?) and -p signifies a percentage split. In the example I create a 30 percent split but you can of course specify by pixel if that is your jam.

Once you have created one or more splits, you can target panes with tmux select-pane -t <index-of-pane> for more commands.

Sending commands to the panes / windows

Lastly, once we have our windows and panes ready, we can send them further commands to start things up. Some examples from the above:

(run the tail command in watch mode against the apache error log, piped into clog - the C-m is used to send an <Enter> to a pane or window)

(run figlet with the string "Ready!", piped into lolcat in true colour mode )

Rounding out the script we have a call to tmux attach -t <name-of-session> which makes it visible. In the script, the name of the session is passed in as a parameter. For extra convenience I have the following alias in my .zshrc to run this script:

Obviously you don't have to attach to a Tmux session - if you had the need, your script could start up all kinds of processes and then you could attach only to check it whilst doing other things (or not!). Tmux also supports multiple people attaching to a session, sending commands to specific sessions, saving sessions (via plugins) etc. The possibilities runneth over.

This article originally appeared on michaelwelford.blog

What are your best meeting hacks? 👨🏻‍💼🚀

What is your work environment (Office, remote, or hybrid)?