I work on Quirk, an open source Cognitive Behavioral Therapy app for iOS and Android. Quirk started as a small command line tool that I used to help my own panic attacks and eventually grew into a company. 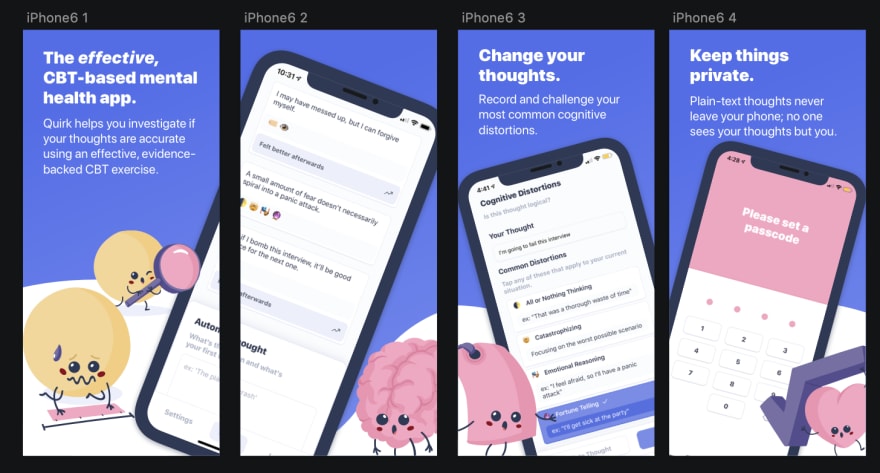 Originally my goal was just to stop having panic attacks (I'd been having them multiple times a week for most of my life). I don't really have attacks anymore, at least not like I used to. CBT and Quirk specifically helped me overcome them.

When Quirk started helping other folks overcome their difficulties, the goals got bigger. Today, Quirk's mission is to create accessible, on-demand CBT. We want to make the difficulty of getting help so little that most people can benefit from CBT.

Imagine if every time you wanted to eat healthier, you saw a nutritionist. Likely people would only see a nutritionist when things got really bad; no one would create healthier habits earlier on. This is basically the way mental health treatment works today. The evidence-based, real solutions are only applied to the most severe cases, because only the most severe cases will jump through the hoops to see a therapist. Plus, depression (and some forms of anxiety) can make you less likely to take steps to help yourself; it drains your energy and convinces you that nothing could really work. Worse, some folks who want access to mental health resources can't afford it or otherwise can't access it due to structural inequities. Even if folks were willing and able to afford it, there's simply not enough mental health professionals to see the overwhelming numbers of people with a mental health disorder (1 in 4).

Many companies try to solve this problem by "scaling" therapists. Maybe they build software to let therapists see more people or maybe they do some form of telemedicine. We wish them the best of luck; we're going to scale people. Or rather, we're going to help people take more control over their mental health earlier on, before they develop a severe condition.

To do this, we're taking advantage of CBT's exercise and goal based nature. If you've never seen a therapist before; it's easiest to understand by analogy to a physical therapist. With a physical therapist, your clinician assigns you exercises that make up a large part of your recovery. CBT is quite similar; it’s heavily reliant on what you do outside the therapists office.

Quirk is basically building those exercises, but for folks who might never see a therapist. It’s a 50% solution. You can use it with your existing clinician, but if you’re not seeing anyone, it’s much better than doing nothing. If you think “oh I don’t really have anything seriously wrong, I don’t think I really need to see a therapist,” Quirk makes a cheap and easy “baby step” you can take.

Most people can be benefited from CBT; a lot of folks I meet are quite surprised to see how much it can help them even though they don’t have any diagnosed disorder.

You might find Quirk useful if you're managing imposter syndrome, interview anxiety, or frustration with your boss or team. CBT can help you make better decisions, be more empathetic, and generally feel happier.

There’s a future where CBT is as common as jogging. If it was, my panic attacks would have never gotten as bad as they did. If it was, we could dramatically reduce stigma around mental health. And if it was, the average person could be a lot happier.

If you want to support Quirk, go check it out on Product Hunt. We're launching our new version today, an entirely redesigned app with a focus on privacy and personal evidence building.