Flutter is booming in the mobile market as the next revolution. It has proven to hold the potential to win over every mobile technology and become the only choice for cross-platform app development in the future. Follow along and check the first most comprehensive list of Flutter Interview Questions and Answers that will trend on mobile developers interviews in 2020. Exclusive on FullStack.Cafe.

Q1: What is Flutter?

Flutter is an open-source UI toolkit from Google for crafting beautiful, natively compiled applications for desktop, web, and mobile from a single codebase. Flutter apps are built using the Dart programming language.

Q2: What is Dart and why does Flutter use it?

Dart is an object-oriented, garbage-collected programming language that you use to develop Flutter apps.
It was also created by Google, but is open-source, and has community inside and outside Google.
Dart was chosen as the language of Flutter for the following reason:

Q3: What is a "widget" and mention its importance in Flutter?

Widgets are important in Flutter because everything within a Flutter application is a Widget , from a simple “Text” to “Buttons” to “Screen Layouts”.

Q4: How many types of widgets are there in Flutter?

There are two types of widgets:

Q5: What is the difference between "main()" and "runApp()" functions in Flutter?

Q7: What are the different build modes in Flutter?

Stateless : Widget state creates ONLY ONCE, then it can update values but not state explicitly. That's why it has only one class which extends with StatelessWidget. They can never re-run build() method again.

Stateful : Widgets can update their STATE (locally) & values multiple times upon event triggered. That's the reason, the implementation is also different. In this, we have 2 classes, one is StatefulWidget & the other is it's State implementation handler i.e. State<YourWidget>. So if I say, they can re-run build() method again & again based on events triggered.

See the diagram below: 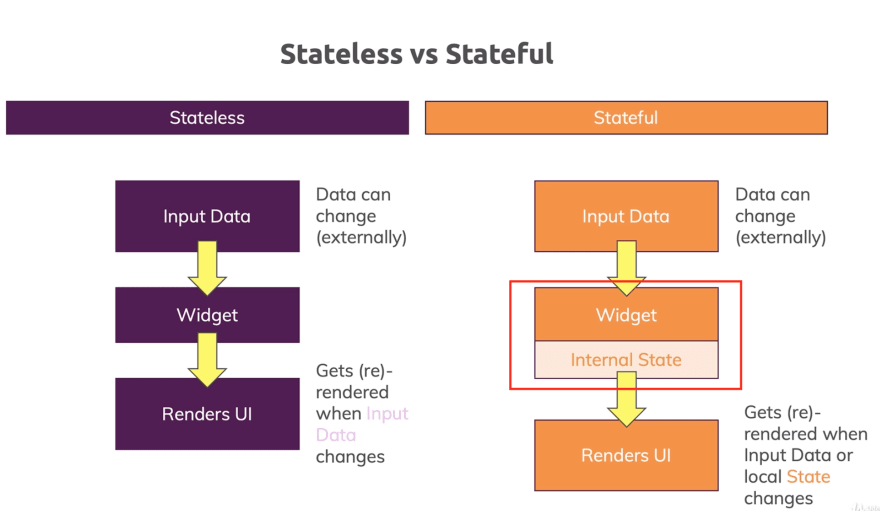 Q9: Why do we pass functions to widgets?

Java Functions are first class objects in Dart and can be passed as parameters to other functions.callback:

(Notice that this is only the code for setting up a listener. Defining a button requires separate XML code.)

(Dart does both declaration as well as setting up the callback.)
This becomes much cleaner and organised and helps us avoid unnecessary complication.

Q11: Differentiate between required and optional parameters in Dart?

Dart required parameters are the arguments that are passed to a function and the function or method required all those parameters to complete its code block.

Q12: What is ScopedModel / BLoC Pattern?

Q13: What is Streams in Flutter/Dart?

There are two kinds of streams.

Q15: What are packages and plugins in Flutter?

Q16: What are keys in Flutter and when to use it?

Q17: What are Null-aware operators?

Q18: What is profile mode and when do you use it?

Q19: What is release mode and when do you use it?

Q20: How would you execute code only in debug mode?

To perform asynchronous operations in Dart, you can use the Future class and the async and await keywords.

The async and await keywords provide a declarative way to define asynchronous functions and use their results. Remember these two basic guidelines when using async and await:

Q22: What is Future in Flutter/Dart?

Q23: What are the similarities and differences of Future and Stream?

The difference can be summarised into:

Usually, you'll want to use double.infinity, but it's not always possible. Some Widgets allow their children to be as big as they want to be (Column, ListView, OverflowBox...). In that situation using double.infinity creates a paradox:

Q27: List some approaches for State management in Flutter

The state of an app is everything that exists in memory when the app is running. This includes the app’s assets, all the variables that the Flutter framework keeps about the UI, animation state, textures, fonts, and so on.

Some approaches to state management in Flutter are:

A stateful widget has the following lifecycle stages:

tip: This method is basically the replacement for 'initState()' if it is expected the Widget associated with the widgets's state needs to to be rebuilt!

Q29: What is the difference between debug mode and profile mode?

First Month as an Accessibility Specialist at Oura

What is your weakness?