No exaggeration, unfortunately. As a disclaimer, I will add that this is a really stupid mistake and shows my lack of experience managing auto-scaling deployments. However, it all started with a question with no answer and I feel obliged to share my learnings to help others avoid similar pitfalls.

I asked this question multiple times in Kubernetes community. No one suggested an answer. If you are unsure about the answer, then there is something for you to learn from my experience (or skip to Answer for the impatient). Here it goes:

I woke up middle of the night with a determination to reduce our infrastructure costs.

We are running a large Kubernetes cluster. "large" is relative of course. In our case that is 600 vCPUs during normal business hours. This number goes double during peak hours and goes to near 0 during some hours of the night. 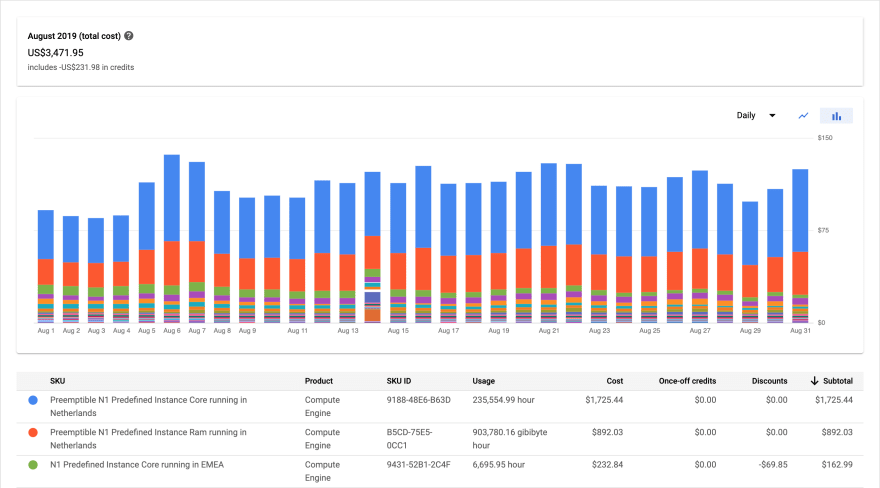 This is already pretty darn good given the computing power that we get, and Google Kubernetes Engine (GKE) made cost management mostly easy:

Using exclusively preemptible VMs is what allows us to keeps the costs low. To illustrate the savings, in case of n1-standard-1 machine type hosted in europe-west4, the difference between dedicated and preemptible VM is USD 26.73/ month VS USD 8.03/ month. That is 3.25x lower cost. Of course, preemptible VMs have their limitations that you need to familiarise with and counteract, but that is a whole different topic.

With all of the above in place, it felt like we are doing all the right things to keep the costs low. However, I always had a nagging feeling that something is off.

About that nagging feeling:

My first thought was that I have misconfigured compute resources. What resource are required depends entirely on the program that you are running. Therefore, the best thing to do is to deploy your program without resource limits, observe how your program behaves during idle/ regular and peak loads, and set requested/ limit resources based on the observed values.

I will illustrate my mistake through an example of a single deployment "admdesl".

In our case, resource requirements are sporadic:

Pods that average 5m are "idle": there is a task in the queue for them to process, but we are waiting for some (external) condition to clear before proceeding. In case of this particular deployment, these pods will change between idle/ active state multiple times every minute and spend 70%+ in idle state.

A minute later the same set of pods will look different:

Looking at the above I thought that it makes sense to have a configuration such as:

However, when I used this configuration, it made deployments hectic.

This would happen whenever a new Node is brought in/ out of the cluster (which happens often due to auto-scaling).

As such, I kept increasing requested pod resources until I have ended up with the following configuration for this deployment:

With this configuration the cluster was running smoothly, but it meant that even idle Pods were pre-allocated more CPU time than they need. This is the reason why the average CPU usage per Node was low. However, I didn't know what is the solution (reducing requested resources resulted in hectic cluster state/ outages) and as such I rolled with a variation of generous resource allocation for all the deployments.

Back to my question:

For starters, there is no price-per-vCPU difference between n1-standard-1 and n1-standard-96. Therefore, I reasoned that using a machine with fewer vCPUs is going to give me more granular control over the price.

The other consideration I had was how fast the cluster will auto-scale, i.e. if there is a sudden surge, how fast can the cluster auto scaler provision new nodes for the unscheduled pods. This was not a concern though – our resource requirements grow and shrink gradually.

And so I went with mostly 1 vCPU nodes, the consequence of which I have described in Premise.

Retrospectively, it was an obvious mistake: distributing pods across nodes with a single vCPU does not allow efficient resource utilisation as individual deployments change between idle and active states. Put it another way, the more vCPUs you have on the same machine, the more tightly you can pack many pods because as a portion of pods go over their required quota, there are readily available resources to take.

Current average Node vCPU utilisation is up to 60%. This sounds about right. It will take some to conclude what are the savings. However, today we are already using less than half vCPUs that we used same time yesterday.

Rainbow Deployment: Why and How to Do It

Once suspended, gajus will not be able to comment or publish posts until their suspension is removed.

Once unsuspended, gajus will be able to comment and publish posts again.

Once unpublished, all posts by gajus will become hidden and only accessible to themselves.

If gajus is not suspended, they can still re-publish their posts from their dashboard.

Once unpublished, this post will become invisible to the public and only accessible to Gajus Kuizinas.

Thanks for keeping DEV Community 👩‍💻👨‍💻 safe. Here is what you can do to flag gajus:

Unflagging gajus will restore default visibility to their posts.