In June 2020, a handful of new features arrived in the JavaScript language.

If you don't want to read the entire article, I have gathered the most noteworthy in this image. 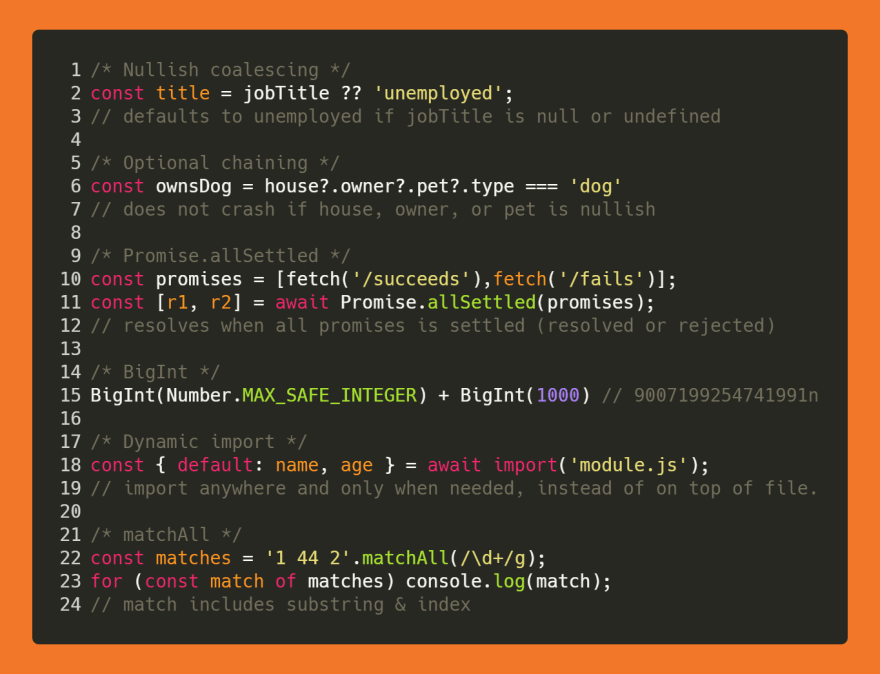 Ecma International is responsible for standardizing JavaScript. Therefore they make the ECMAScript specification. So when someone refers to ECMAScript you can think of this as a synonym to JavaScript. Since 2015 they create yearly editions. Therefore we refer to the edition with the year, ie ECMAScript 2015 is shortened to ES2015. But there are a lot who use the count of the number of editions when referring to an edition, therefore ES6 is the same as ES2015. Future features not yet released are referred to as ESNext.

In June ECMAScript 2020/ES2020/ES11 was released and is already implemented in modern browsers. Let's look at what advantages this gives us.

If you want to assign a value, but want a default value in case it is null or undefined, you can use ??.

Here the name will be "anonymous" if the object person doesn't have fullName set. If the person has a value for fullName, then that will be written to the variable name.

You might think that this is something you always have been able to do with ||. But this is only almost the same, if the value before || is falsy, the evaluation won't short-circuit and the next value will be used. But remember that an empty string '', 0, NaN, and false are falsy and will use the default value, something that might not be wanted if we want to assign those values. ?? uses instead nullish, which only checks for null or undefined.

50 is only used if preferredSound is not set or null, it should be possible to set the sound-level to zero.

Imagine that we have a house with an owner, that again owns a pet. Here we need to make sure that house, owner, or pet has a value or check them in advance to avoid getting the error "Cannot read property 'type' of null". Here you can see how we needed to deal with this before and after ES2020.

If we have more asynchronous requests that run in parallel, you could gather them with Promise.all. But this will throw an exception if one of the requests fails. What if we want to let every request finish no matter if others fail or not. With Promise.allSettled it will return when all requests are settled, either resolved or rejected.

Here we can still use the result1 value even though other promises were rejected.

Let's find all the numbers in a string.

BigInt is a new primitive datatype in JavaScript, the same as Boolean, Number, String, Symbol, and undefined. BigInt can handle numbers above the safe integer limit of Number. That means if we want to deal with numbers larger than 9_007_199_254_740_991, it is wise to use BigInt. BigInt is represented with an n at the end of the number.

Before we only could import modules statically at the top of the file. Now with dynamic imports, we have the option to do this anywhere in the code on-demand and only when we need it. import() will return a promise with the module.

With import and export of JavaScript modules, we have in most situations been able to rename the name of the module. Like this.

But we have not been able to re-export something from another module with a name change directly. Now with ES2020 we can do it like this:

If you write code that runs on multiple environments, for example, both the browser and a Node server, then they have different names for the global object. Browsers use window, Node uses global, and web workers use self. Now, globalThis will give you the correct global object no matter which environments the code runs in.

Here is an example where we want to check if we can prompt an alert to the user. If the code runs in a browser the globalThis will refer to window and alert will be available.

Once suspended, gautemeekolsen will not be able to comment or publish posts until their suspension is removed.

Once unsuspended, gautemeekolsen will be able to comment and publish posts again.

Once unpublished, all posts by gautemeekolsen will become hidden and only accessible to themselves.

If gautemeekolsen is not suspended, they can still re-publish their posts from their dashboard.

Once unpublished, this post will become invisible to the public and only accessible to Gaute Meek Olsen.

Thanks for keeping DEV Community safe. Here is what you can do to flag gautemeekolsen:

Unflagging gautemeekolsen will restore default visibility to their posts.