On the 11th of July 2019, At Chain React 2019, Hermes JavaScript engine was announced running on React Native, It was first used internally by Facebook before it went open source. Before this, the React Native team at Facebook analyzed performance data and noticed that the JavaScript engine itself was a significant factor in start-up time and download size.

Why you should use Hermes

We built a new JavaScript engine we call Hermes. It is
designed to improve app performance, focusing on our
React Native apps, even on mass-market devices with
limited memory, slow storage, and reduced computing
power. 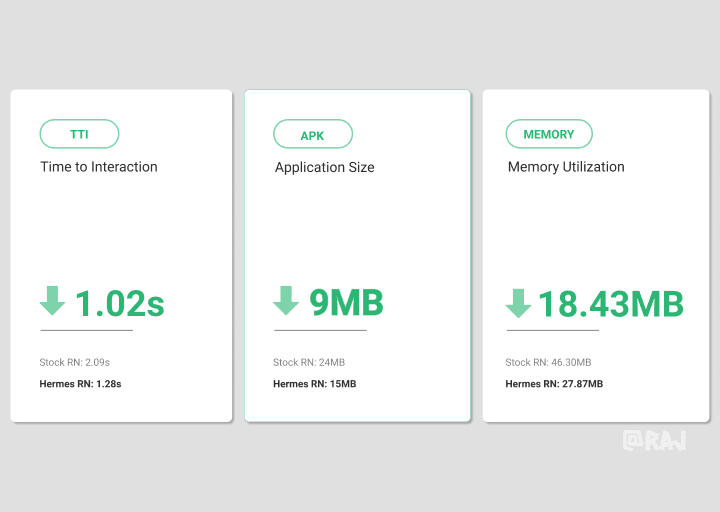 The three main architecture Facebook focus on improving are :

Hermes adapting garbage collection aids to reduce the overall virtual memory consumption by implementing on-demand allocation in non-contiguous chunks that can be moved around and returned to the OS when no longer needed, Operating systems aggressively kill applications that use too much memory. When apps are killed, slow restarts are required and background functionality suffers.

The following are the features of the garbage collector :

Why ditching the JIT compiler helps

Before version 0.64, Hermes did not have support for iOS and that is because Apple is forced to use JavaScriptCore and not V8 like Android devices.

JavaScriptCore is an optimizing virtual machine and it’s the built-in engine for Webkit.

WebKit is a browser engine used in the Safari web browser and every other iOS browser, it was built by Apple in C++ and runs on macOS, iOS, and Linux.

Fun-Fact: This engine was used by BlackBerry.

On the other hand, V8 is an open-source WebAssembly and JavaScript engine, it was built by Google in C++ also. V8 is used in Node.js and it runs on Chrome, Chromium, and lately, it is what powers the Microsoft Edge browser.

V8 implements WebAssembly and ECMAScript, and runs on Windows, macOS, and Linux.

It’s 2021🎊🎊 and with the release of version 0.64 we are happy to now use Hermes to build on iOS as well. To enable Hermes on iOS, set hermes_enabled to true in your Podfile and run pod install.

We now have Proxy support to Hermes, enabling compatibility with popular community projects like react-native-firebase and mobx. If you have been using these packages you can now migrate to Hermes for your project.

Setting up Hermes is seamless and easy.
According to React Native’s awesome documentation, we will first start by editing our android/app/build.gradle file and setting enableHermes to true like so :

If we use ProGuard in our application, we will have to add rules in android/app/proguard-rules.pro like so :

For these changes to take effect we will need to clean build, so in our terminal, we will do like so :

Finally, we are ready to build and test our app and we will do like so :

Confirming if Hermes is enabled in our project

If we created a new app with $ npx react-native init AppName before setting up Hermes we will see that Hermes is enabled at the top-right corner of our app screen.

But if we had an existing project we can still test by making use of the global HermesInternal variable like so :

To see full benefits why we use Hermes, you can build a release version of your app to compare the differences and see improvements in app startup time and bundle size like so :

In this article we have an understanding of the following things :

I will like to thank Tzvetan Mikov, Will Holen, and the rest of the Hermes team on their work to making Hermes a success.