This post is a continuation of Advanced Front End Developer , Interview Essentials - Part 1 ,if you haven't read it I strongly recommend you to go through the post where I have explained the CRP in detail

Optimizing the Critical Rendering Path is very essential for performance of a site , and always keep in mind the below rule

You cannot optimize something that you cannot measure

You should stream HTML as fast as you can ,we can achieve that by these step's minification,compression and caching the HTML.

In which stage of CRP, Do you think will the page be rendered ?
It will be rendered when the render tree is constructed ,i.e. just after CSSOM has been constructed, and it will be the render blocking step , so it becomes crucial to optimize CSSOM

As CSS is a render blocking resource,always keep your CSS lean, deliver it as quickly as possible, and we can use media types and queries to unblock rendering

If we have some CSS styles that are only used under certain conditions, for example, when the page is being printed or being projected onto a large monitor,but you are viewing in a mobile ,then we can block rendering on the resources that are not used.

CSS media types and media queries allow us to address these use cases,in the below example if we maintain a separate style sheet for different use cases , Example : we may need to apply certain styling for print or in responsive site we can mention a specific width during which case only the style sheet must be imported

The CSS import (@import) directive enables one stylesheet to import rules from another stylesheet file. However, avoid these directives because they introduce additional roundtrips into the critical path: the imported CSS resources are discovered only after the CSS stylesheet with the @import rule itself is received and parsed.

Put CSS in the document head

Specify all CSS resources as early as possible within the HTML document so that the browser can discover the <link> tags and dispatch the request for the CSS as soon as possible.

JavaScript allows us to modify just about every aspect of the page: content, styling, and its response to user interaction . JavaScript can also block DOM construction and delay when the page is rendered. To deliver optimal performance, make your JavaScript async and eliminate any unnecessary JavaScript from the critical rendering path

Let's take the below example where there is a style sheet as well as script that modify the <p> tag , so will the text be rendered black or red , the answer to this lies in the order of the execution

CSS blocks script as well as rendering page, so it becomes crucial to optimize the CSS 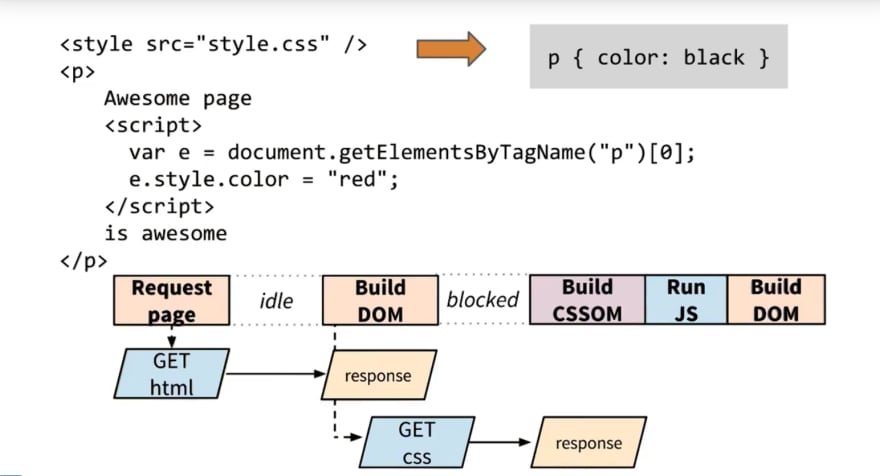 1.All JS code might not modify the DOM in such cases one way we can optimize JS it to load it after DOM has been loaded ,like below

There are other methods of optimizing a site ,in my next post I will discuss on how to achieve Fast Load time for your site

Once unpublished, this post will become invisible to the public and only accessible to Goutham JM.

Thanks for keeping DEV Community 👩‍💻👨‍💻 safe. Here is what you can do to flag gouthamjm:

Unflagging gouthamjm will restore default visibility to their posts.