In this article I will explain how I built a star rating system that is ACTUALLY accessible, easy to style for your own needs and easy to integrate into any framework as it uses semantic HTML.

If you are busy just skip straight to the first example

I have seen several star rating systems shared recently which are completely inaccessible to people using a screen reader (a device that allows websites to be read out loud to people or converted to braille) or people who rely on a keyboard (people with movement disorders / accuracy issues such as Parkinson's Disease, Cerebral Palsy etc.).

I get frustrated by this lack of thought from authors as they release code into the world that contributes to a lack of accessibility.

Then people just copy and paste example code with no thought (or they may be new to development and not know about accessibility yet) and accessibility issues perpetuate forever (hence why we still have people using <a href="#" for buttons...an overhang from 13 years ago when we couldn't style <button>s...that is how long it takes to kill a bad practice!)

Anyway, this isn't one of my angry rants, so here it is, my first contribution to trying to fix this problem, a truly accessible star rating system.

Why is this better than the other examples you have seen before?

Try it with a keyboard, mouse, screen reader (if you know how to use one) etc. It should work flawlessly.

The first is using CSS variables - so simply swap those out for the actual values.

The second is focus-within to put the focus around the box. Instead for IE we just put focus indicators around the <span> that contains the stars.

The beauty of this second example is it lets you see how everything works if you use a keyboard to focus the item! (you can see how the labels are stacked on top of each other and different widths to achieve our star rating effect).

An explanation of the logic.

<fieldset> is a semantically correct way of grouping controls. As the radio "buttons" all relate to the same item (your star rating) this lets screen reader users know what they are answering.

We use <input type="radio"> as that is the most logical HTML form element. You should use radio buttons whenever there are multiple choices but only one can be selected at a time.

To ensure the inputs have a label that is correctly associated I use for on the label to point to the relevant input with that ID. This is important as screen reader users need a correctly associated label so they know what an input is for. Otherwise they just hear "input" - which is not very useful!

Just for reference, you can do the same (correctly associate a label with an input) using:

But apparently Dragon Naturally Speaking struggles with implicit labels so I went for maximum compatibility.

What is with the <span>s inside the label though?

The <span> is for screen reader users.

This text is invisible on the screen but is still readable by screen reader users.

This way when they focus the star rating system and select an option they will hear "Your rating: 3", "Your rating: 4" etc. or similar.

Without this they would have the same issue of just hearing "input" as although I provided a label there would be no text within it.

You will notice I apply the same styles to the <input> as well to make it invisible visually but still accessible for screen readers.

This is the biggest problem most star rating systems have, they hide the <input> with display: none.

This means you cannot focus it anymore with Tab and so it is completely unusable for people who only use a keyboard.

Colour is important too

A lot of star rating systems use yellow stars with no border. This provides terrible contrast with the background and can be an issue for people with low contrast perception.

As such I have a dark grey border around my stars so they stand out even for people with contrast perception impairments (or people trying to use the site in direct sunlight....I am sure you know how annoying that can be on low contrast sites!).

Simple to adapt to your own needs

If you want to use a different icon that is super simple.

You need three versions of your star as SVGs, a filled version, an unfilled version and a hovered version. Ideally they should be square to avoid having to alter the CSS.

Then just copy the SVG text into this converter press "convert" and then copy the result.

You can also have a ten star system if you want, in this example I have changed the --max-stars CSS variable to 10.

You can have between 2 and 10 stars by simply adding the right number of radio buttons and then changing the --max-stars CSS variable to match.

And as a final note I have designed the CSS so it will not leak into your document (unless you happen to use the same CSS variable names!) so you should be able to just copy paste and go without any Cascade issues.

One last trick that was used to make this work

If you inspect the elements you will notice that I have cheated a little bit.

Then we just let the background (the star SVG) repeat and fill the label.

We repeat this process all the way to one star.

The only annoying thing is that to maintain a logical DOM order (so that pressing the down arrow increases the number of stars) we have to use the z-index property to put the last option to the back (as naturally it would want to be at the front).

Mini bonus fiddle to help use with JS libraries

If you want to get the current value of the star rating system in JS it is super simple (you can use the selectors / principle to convert it to any JS framework you are using.)

You can see that in action here:

Obviously the whole thing works without JS and you can just use it as part of a normal form POST / submit but I thought I would add that just to show how easy it is to convert!

I think the above is about as simple as you can get for a rating system that is accessible and has very high browser coverage.

Now as I am preaching about accessibility if anyone does notice a mistake please do call me an idiot and point it out! Hopefully I haven't made a mistake somewhere 🤞.

With that being said, I am quite confident the above is truly accessible and I would be confident in saying that you can use it in your own projects.

If enough people read this article that is one component on the web that hopefully will be accessible to everybody. 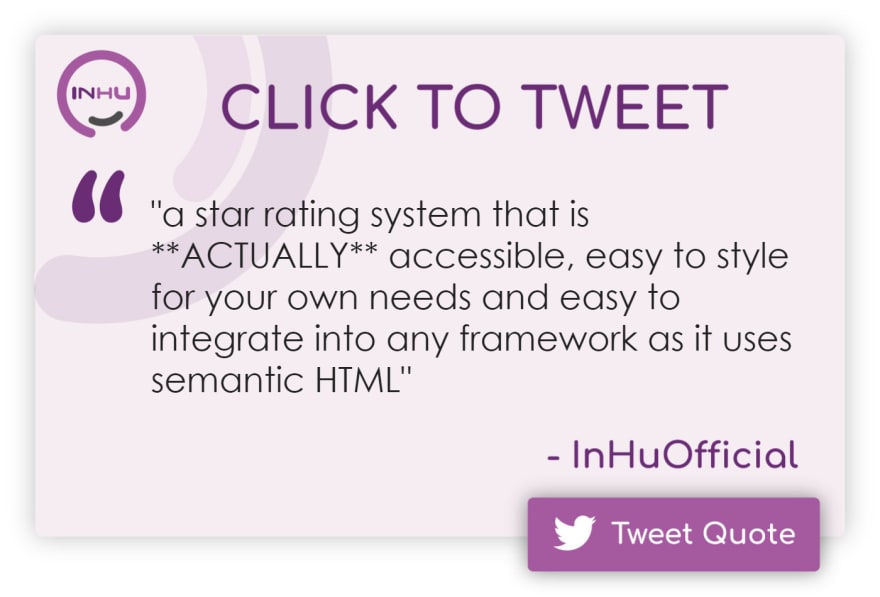 GrahamTheDev
Specialising in accessibility and website load speed / performance. Proud to be part of the awesome team over at daily.dev
So I got a job 🎉...and I am as shocked as you are! 🤯
#watercooler #writing #career #webdev
I Am Warning You Don't Click!
#watercooler #discuss #html #meta
Did you know there are 4 and 8 digit hex codes (#11223344?) for colours? 🤯
#css #codepen #beginners #webdev

Thanks for keeping DEV Community 👩‍💻👨‍💻 safe. Here is what you can do to flag grahamthedev: