Yeah, I know, another snake game... But I wanted to introduce you to pygame, a fun little module capable enough to make simple and fun 2d games in python, so here I am ...

To get started, you must have python and pip installed on your system,
You can get more info at here
To verify that python is installed, on the terminal, run

If you get something in return that means you are successful 🎉🎉🎉 ...
Now it's time to install pygame, just run

If you faced any trouble, you can check this page

Alternatively, if you don't wanna go through all this setup, you can use repl.it , it has an online pygame compiler that you can use
check it out here

We can finally start writing some code, You can use any favorite ide of yours ... vscode, sublime, atom,pycharm, brackets, etc ... It doesn't matter ╮(╯3╰)╭ ...

Just make a new python file in any directory and name it anything you want 👍 ...
The first job is going to be to import pygame and initialize our game window

Let's discuss the code above,

Now if you run this code, you will see the game screen for a short time, and then it exits the program ...
Can you guess why this happens 🤔, well cause we didn't define any game loop ...
A game loop is just an infinite loop , that goes on forever until the user exits or closes it ... As we didn't define any game loop, the window was visible for a moment, but then the program ended, and so the game screen was also gone...

Let's go ahead and implement our game loop 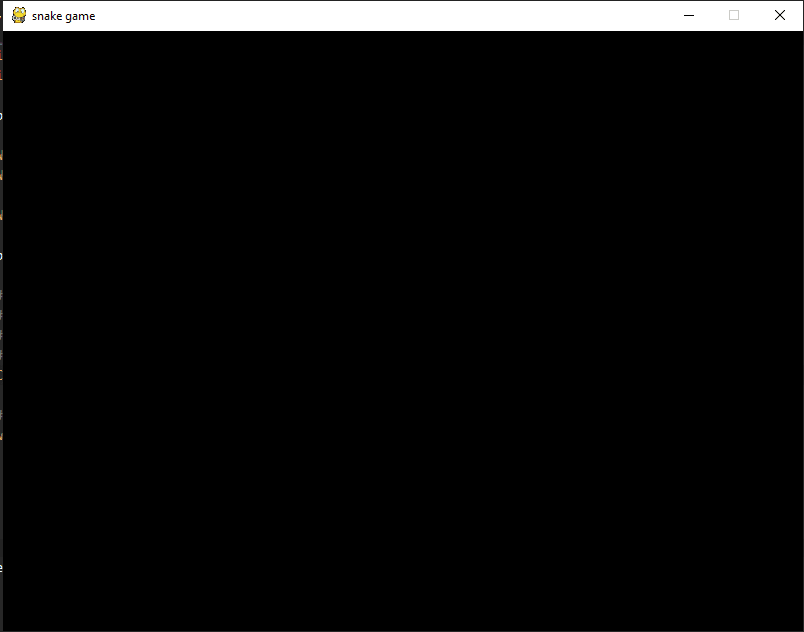 Now if you run the program, the window is going to stay until you press the exit button, congrats if you could follow up on this 👍 ...

📝 In the above, I just wrote a simple infinite while loop,
then I wrote another for loop which checks for events like mouse-clicking, hover and others, (The method pygame.event.get() returns the events that are occurring currently, there, I am checking if event.type is equal to the event pygame.QUIT or in other words did the user click the cross button, if that's true, quit the program, else continue to run ...)

You also might have seen the CLOCK variable I declared, it just initializes pygame.time.Clock() and using it, in the while loop, I used CLOCK.tick(25), which just tells pygame to run the while loop 25 times per second, you are more than welcome to change the number ╮(╯3╰)╭ ...

Now it's time to plan our core game logic,

So we will have these 3 functions, main, main_menu, game_over, they represent different scenes of our game, for now, we will only focus on the main function or the main game logic ...

So first of all, how we will render and move our snake 🤔, that's the first and most obvious thing to do ...

Now how we will store these squares, and how we will track the position of the square ...

We can start implementing the logic discussed above, first, let's start creating our main function, I am going to shift my game loop there

Here, I just shifted my code to the main function, made a snake_body and snake_pos variable, in the game loop, I rendered the snake, read the comments if you can't understand, the code should be self-explanatory
( ━☞◔‿ゝ◔)━☞,

So when we say 20 on the x, 10 on the y in pygame , it means go 20 to the right from the top leftmost corner and 10 to the down from the top .
If you run the code you should see something like this 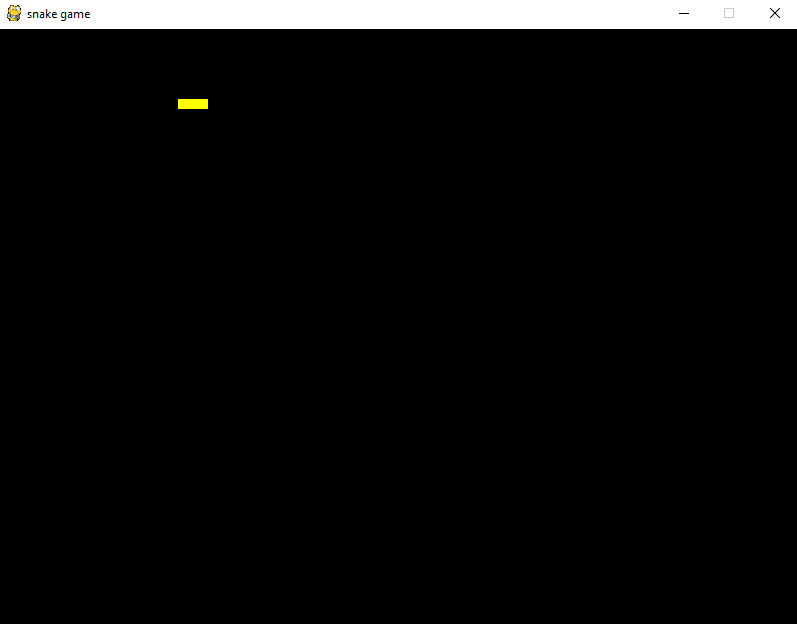 Well we can see the snake so that's great news, but the snake is not moving, it's just a static snake on the screen, well that's boring 🥱 ,
let's make it move 🙌 .
At the end of the main function before we run pygame.display.update() add the following code

If you run the code now, absolutely nothing is going to happen, the snake does not move ( º﹃º ) , why is that?
Because we render squares in snake_body, we don't render the snake_pos, and here we are adjusting snake_pos

So what to do now, well to make the snake move, we can insert our snake_pos to the beginning of the list, let's see what happens, below the code where we check directions and before pygame.display.update() add this

Now if you run the program, you will see something like this,

The snake keeps growing endlessly, but we only want our snake to grow once he eats fruit, we have to fix this...

But why it's behaving this way 🤔, well we are appending snake_pos to snake_body, but not removing the old squares from the snake_body, so it's growing endlessly, one thing we can do is remove the oldest square by removing the first item from the list,

Below the code where we append snake_pos to snake_body, add the following

So our snake is moving at last, but it's only moving the right, well that's not what we want, let's add some controls

If you run the code now, you should be seeing something like this

So we got our snake moving, now one thing I would like to fix right away is that snake moving instantaneously 💨 ...

Saw that right, well luckily it has an easy fix 🎊, when we are changing the snake's direction, we can check if the snake is already in the opposite direction

Suppose the snake's direction is up, the user wants to go down now, but the snake is going up and we don't want any instantaneous movement, so we'll not go down

The place where we are changing direction in the for loop, change those if check's to this

With that, the bug gets fixed 👍.

But now, the snake can go through the boundaries of our screen, and keep going endlessly ...

Well we can exit our application if the snake hit's the boundaries of the window, later on, we will introduce a game_over and main_menu scene ...

At the end of the game loop , add this

This should work however it might be a bit off, might not look pixel-perfect, we can make it better by adding some pixels, worked for me

Bringing the fruits in

At the start of the main function, before the game loop, add this

Then in the game loop, before pygame.display.update(), add this line

Here, we are generating a random position for the grape and drawing a 10x10 Rect.
If you run the code now, it should look something like this

Well, its kind of keep on generating grapes and not stopping at all, The reason this occurs is that in every round in the while loop, we are changing the fruit_pos and rendering it ( º﹃º ), ...

To fix this we can use our fruit_spawn variable, which was set to true initially

The place where we wrote our grape spawning logic, cut that and use this

Now, only one fruit should be visible,
If you notice, you will see that we only have one fruit, we are
just changing its position

But the snake still can't eat any fruit, let's add that

At the game loop , before pygame.display.update() , add this

Let me just directly describe what I did instead of commenting 🙃...

Now the way I did it looks strange 🥴, So let me explain that 👍

But our snake doesn't grow, why is that, how we can make him grow?

Well, remember that we were always removing the first item from snake_body after we append snake_pos to snake_body

The place where we remove the first element from snake_body, cut that part, then got the part where we check collision between fruit and snake, change that to this

And now the snake will start to grow,
But why is this working 🤔,
When we first start our game, snake_body should be like this

in the game loop, we add snake_pos to it and remove first element
Then it should be something like this

Here the snake is 3 squares long, what happens if we don't remove the first element next time

The snake is 4 squares long

Now we face another problem when the snake collides with his own body, We have to stop the game if that happens

In the game loop, add this line

Now, what did I do here?

Now why I excluded the last element in snake_body using snake_body[:-1] ...

With that our game is almost ready

We now have to display our score,
In pygame, to show text, first, we have to load a font
at the start of the file, after importing pygame and before the main function, add this

Here we are loading a system font using pygame.font.Sysfont() which takes font as first argument and size as 2nd
I chose comicsans, u can choose other system fonts like timesnewroman

Next, we also have to use this font now ...
At the game loop, before pygame.display.update() add these two lines

So what did I do here?

That's a fully functioning snake game we have here 🎉🎊🕺...

The main menu and game over scene

And Before I end this post, let's implement the main menu and game over scene...
Let's start with the main menu

In our game code, before the main function, put this code

Ok, Let's go through this quick. In this function, we wrote another game loop and another check for pygame.event.get()

If the user clicks anywhere, the main function will be called Which means the game will start, We also display a message 'Press anywhere to start' at the center of the screen

Now at the end of our code, where we call main(), instead

We are almost done, The thing which is left is the game_over scene
Let's quickly go through that

What the game_over() does is show that you have lost and your score. Pauses the program for 3 seconds and then just calls main_menu()

Now in the main function, whenever we die, we are calling sys.exit(), instead of that, call game_over() passing in the score

Your main function should be close to this

With this, We should have a complete snake game...

The complete code can be found at my GitHub here

So here you have it... A snake game with pygame, feel free to play with the code and adding features like maybe a high score system, some small animations, add difficulty levels, etc...
Also, it would be better if you create something yourselves.
There are many resources to help you work with
First is the pygame website: https://www.pygame.org/news
2nd will be invent with python: https://inventwithpython.com/
check out this article: https://inventwithpython.com/blog/2012/02/20/i-need-practice-programming-49-ideas-for-game-clones-to-code/

You can also check out games I made with pygame, they might not be the coolest, But you'll get some idea