Mocking is primarily used in unit testing and it’s a practice of creating a fake version of an object or a component, so you can isolate its behavior to develop other parts of your software independently.

Creating a mock backend is considered a good practice for a couple of reasons:

It’s very popular to start a frontend and a backend development at the same time. Having a mock backend let you work on frontend server-depended tasks even if you don’t have a working backend yet.

Fake backend lets you run local tests. When you don’t need to connect to a real backend it's much safer (and faster). As the project becoming more and more complex, preparing a server infrastructure just to run some tests can be a very unpleasant task and might cause you a lot of trouble.

Is it hard to create a mock backend?

As you see having a mock backend is definitely a huge benefit, then you must be asking yourself why this solution still isn’t that popular? I bet that the first reason that would appear in your mind is that it’s probably too difficult or time-consuming. If that came to your mind you are partially right - creating a mock backend used to be difficult, but it’s not anymore!

GraphQL made mocking data super easy! GraphQL is a strongly typed language. Type System defines various data types that can be used in a GraphQL application and these types can be easily shared between frontend and backend as they have all the information required to mock data.

We went a step further, our GraphQL Editor allows you to the created mock backend with a single click! Don’t believe? Test it yourself. First, go to https://app.graphqleditor.com/ : 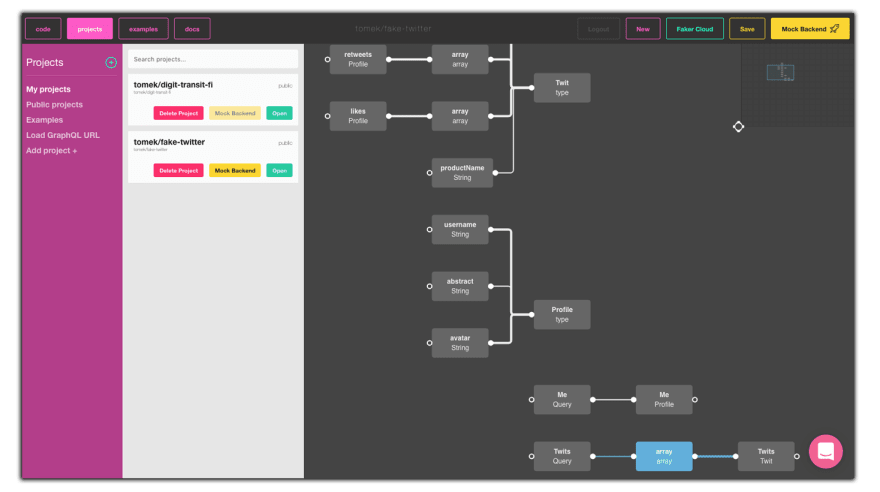 All you need to have is a valid GraphQL schema. You can upload an existing schema from a link or use one of our sample schemas. Once you have it loaded just save it and click “Mock Backend” button:

And that’s it! You have a ready to use fake backend endpoint ready for some tests. Use the GraphiQL window and play around with your mock backend:

The original article was posted on GraphQL Editor Blog - https://blog.graphqleditor.com/visualize-your-schema/

Here is the link to GraphQL Editor app in case you want to try it out -
https://app.graphqleditor.com/showcase/fake-twitter/