DEV Community is a community of 702,959 amazing developers 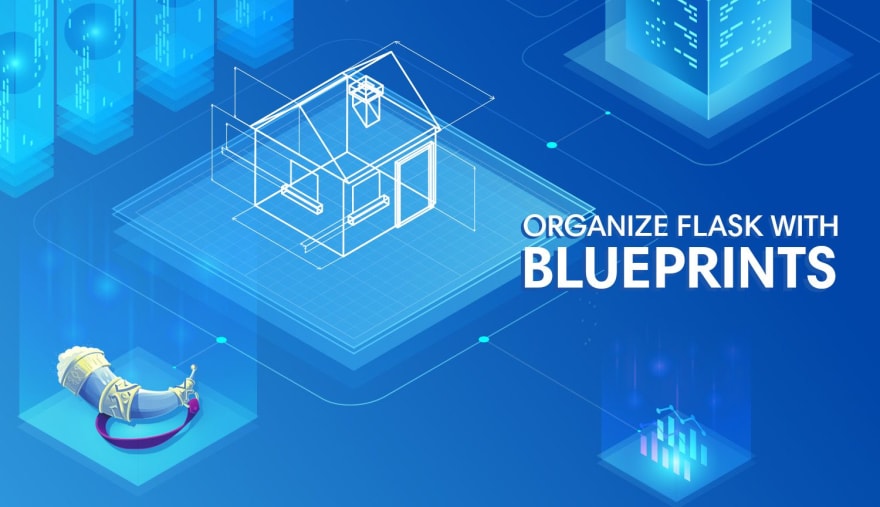 I'm unclear as to when or why it happened, but at some point in the last couple of years, I became emotionally and perhaps romantically involved with Flask (I'm sure you've noticed). I've since accepted my fate as being the guy-who-writes-flask-tutorials-on-the-internet-for-no-particular-reason with few regrets. There aren't many perks that come with that title, but it certainly offers some unique perspective, especially when it comes to widespread misconceptions about what people believe about Flask. Of these misconceptions, two are particularly popular as much as they are false:

It's no surprise as to why Flask newcomers believe that structuring entire projects into single app.py files is normal and acceptable. Almost every Flask tutorial is structured this way, presumably out of convenience, but it seems as though an asterisk is missing from these tutorials which should read _ *THIS IS NOT A GOOD WAY TO BUILD APPLICATIONS. _

Good software is organized by separation of concerns. It's easy to think of an application as a single entity, yet reality shows us that well-structured apps are collections of standalone modules , services , or classes. I'm referring to the Single-responsibility principal: a commonly understood concept where each piece of an application should be limited to handling no more than a single responsibility. It's the same reason why bathrooms and kitchens are separate rooms: one room is for shitting, and one room is for eating. It's a mess to shit where you eat, which is precisely what happens when building applications without structure or encapsulation.

We can organize our Flask apps via a built-in concept called Blueprints , which are essentially the Flask equivalent of Python modules. Blueprints are intended to encapsulate feature-sized sections of our application, such as checkout flows, user auth, user profiles, etc. (basically anything suitable to be represented as a JIRA epic). Blueprints keep related logic and assets grouped and separated from one another, which is essential to designing a maintainable project. Blueprints also enable performance benefits associated with code-splitting, similar to Webpack.

The best way to get a glance at the benefits associated with using Blueprints is to see the effect they have on an app’s structure. First, let’s look at what a large app might look like without Blueprints.

Meet Billy. Billy is pretty new to Flask, but is confident in his abilities to build large-scale Flask apps after reading parts 1-5 in this series. Armed with only that knowledge, his app looks something like this:

Billy has a lot of what you might expect a lot at first glance. He has his handy app.py file (ugh), a folder for templates, a folder for static assets, and so forth. Without knowing what Billy’s app does, this all seems reasonable. As it turns out, however, not knowing what the app does is our downfall in making such an assessment.

It turns out Billy is building a customer-facing service desk portal for Boeing. After rushing the Boeing 737 to market and murdering hundreds of people with criminal negligence, Boeing hired Billy to build a friendly service desk to field complaints from the families of victims. Service desks are complicated pieces of technology. Consider the major parts of what might go into something like Zendesk:

Billy’s app suddenly looks like the type of insult to engineering that only the creators of the Boeing 737 would commission. Is Billy really storing routes, templates, and assets for all these things in one place?

Flask blueprints enable us to organize our applications by grouping logic into subdirectories. To visualize this, we're going to create an example app with three blueprints: home , profile , and products :

Unlike Billy's app, it's immediately apparent what the above app consists of and how logic is divided. Product pages don't share much in common with profile pages, so it makes plenty of sense to keep these things separated.

A substantial benefit of blueprints is the ability to separate page templates and static assets into blueprint-specific /templates and / static folders. Now our landing page won't find itself loading irrelevant CSS, which pertains to product pages, and vice versa.

An important thing to point out is the presence of top-level /templates and / static folders in addition to their blueprint-specific equivalents. While blueprints cannot access the templates or static files of their peers, they can utilize common assets to be shared across all blueprints (such as a layout.html template, or a general style.css file that applies to all parts of our app). We'll dig into how assets and blueprints work together, but let's start by defining our first blueprint.

If you happen to be a Django person, this may start to sound familiar. That's because we can equate Flask's Blueprints to Django's concept of apps. There are differences and added flexibility, but the concept remains the same.

Our first blueprint will be our "home" blueprint, which will be where all routes, templates, and logic regarding homepage stuff will live. Inside the /home directory, we'll create a file called home.py to define our blueprint and its routes:

Setting static_folder mimics the behavior of setting template_folder, except for serving static assets.

Creating Routes Inside a Blueprint

Now that we have a Blueprint created, we can start adding routes to this subsection of our app! Here's how that looks:

We've created a Blueprint and registered our first route to it, but how do we tell our Flask app that this blueprint and its routes exist?

This is where we break into our top-level entry point, like __ init__.py in the Flask application factory pattern. Here's the simplest example of registering a Blueprint using this pattern:

With all the contents of home.py imported, we can then use a method on our app object called .register_blueprint() to tell Flask to recognize this section of our app. We pass in the variable name home_bp from home.py, and that's it! Our Flask app will now respect the routes registered to home_bp, which in this case happens to be our homepage.

We'll almost certainly have more than a single Blueprint, since modularizing our app is worthless if we only have one module. Registering multiple Blueprints is simple:

We've now registered the three blueprints we saw in our example: home , profile , and products.

A caveat we need to be aware of is how Jinja templates find URLs for routes registered to Blueprints. Let's say we want to create a link to our app's homepage. In an app without blueprints, you'd find the route for our homepage using the following:

This is where the 'home_bp' part of home_bp = Blueprint('home_bp') comes into play: the string 'home_bp' we passed into our blueprint is the internal name Flask uses to resolve routes with! Now we can find our homepage by doing the following:

Since Jinja is contextually aware of blueprints, we can use a few cool tags to verify where we are in our app. Here are some useful tools to demonstrate how powerful Jinja is when it comes to knowing each page template's context:

Just for fun, I spun up a working demo of our example app here. Here's what the homepage returns for all the above values:

To initialize Flask-Assets ( pip install flask-assets, by the way), we need to revisit __init__.py :

We first create an empty assets "Environment" called assets with the line assets = Environment(). As with all Flask plugins/add-ons/whatever-they're-called, we then initialize Flask-Assets after our app object has been created by calling .init_app() on said app object.

Within app_context(), I then pull in the help of a function called compile_static_assets() which I've imported from a file called assets.py :

Aaand here's where things probably look a little daunting (did I mention there's a separate tutorial for this)? The gist of what's happening is that we're created four stylesheet asset "bundles." That's one asset bundle per blueprint, as well as a bundle for global styles.

The first argument of Bundle() is the filepath of static source files to make up our bundle. common_less_bundle is given 'src/less/*.less', which actually resolves to the following in our app:

Bundle() assumes the application/static part of our filepath, as this is the default static folder define with our app. To see where things get more interesting, check out what we pass to home_less_bundle :

Flask is able to resolve this to the location of our blueprint the same way Jinja does:

And here's how we'd actually serve the resulting CSS from said bundle in a Jinja template:

The {% assets $} block is a Jinja tag added by Flask-Assets to help us serve bundles by their registered name! Instead of memorizing where our static assets output to and hardcoding those file paths, Flask-Assets is able to discern that the {{ ASSET_URL }} of home_less_bundle is 'dist/css/home.css', just as we specified in assets.py

Did You Get All That?

This is clearly easier said than done. In recognition of that fact, I went ahead and created a Github repo that contains the working source of the demo we just covered. The only caveat to running the code below is that I used the BestBuy API to source shitty products for the product pages, so you might need to grab a BestBuy API key to get it going (sorry):

Just to prove this isn't some nonsense, the repo is deployed as a working demo here:

Definitely cruise the demo to see how blueprints work together while paying attention to the "Blueprint Info" module at the bottom of each page. As always, feel free to steal my source code and use it for yourself on whatever project you might have hastily agreed to. Mi code es su code.

Combining the what we've seen here with your knowledge of Flask's application factory and Flask-Assets should be all you need to start building logical, organized Flask apps. Godspeed, and screw Boeing.

All Of My Articles Combined

How to use Google Colab to package KivyMD applications with buildozer.

5 Project to Master in Python for Beginners