I wanted to accept user comments on a Gatsby website and store them on GitHub. As in, I wanted the comments to go straight into a file called comments.json in my repository. So I could use something as simple as

in my site's code. Without any databases. No third-party plugins making tens of networks requests.

Netlify serverless functions allowed me to use GitHub's API to make this repository change with the data from a submitted comment. It also hid my secret API credentials.

I built a prototype — healeycodes/gatsby-serverless-comments — that uses this flow:

Let's pick through the serverless function that receives the user's comment. It will make use of some constants that can be set through Netlify's website on settings → deploys. 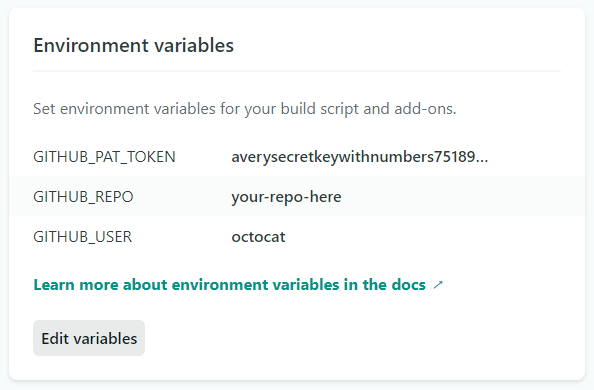 The function is written with Node.js and exports a handler function, which is explained in Netlify's documentation.

What if someone spams comments on your website? Well, you'll hit your build time limits pretty fast.

There's also a small window (10-100s of milliseconds between API calls) where two people comment at the same time and the older comment will be overwritten.

The fix for both of these is to alter our serverless function to open a pull-request with the comment change. Comments are now delayed but we've protected ourselves from malicious behavior and we can also screen comments for appropriateness. We won't lose any data but might rarely need to handle merge conflicts.

Netlify are betting big on Jamstack applications. It's a bet I would make too.

Their developer experience (DX) is up there with the best right now. It's rare I read about a product just working and then it ends up doing so! Recently, Netlify's snappy deployments let me rush out changes to fix live issues within minutes.

What does this mean for their future success? Well, Tiny.cloud points out that:

DX is kind of a big deal. Developers can play a huge role in the uptake of your product, especially when you consider they are likely to provide guidance on what tools their organization should invest in, even though the final decision usually happens at the executive level.

Netlify's developer tooling lets me create prototypes like the one you're reading about without having to mess with configuration. My Gatsby website is hosted with their generous free tier and transferring and hosting it has been hiccup-free.

Join 300+ people signed up to my newsletter on code and personal growth!