Um … But technically I can use emoji right? Or maybe I can use this NPM package? 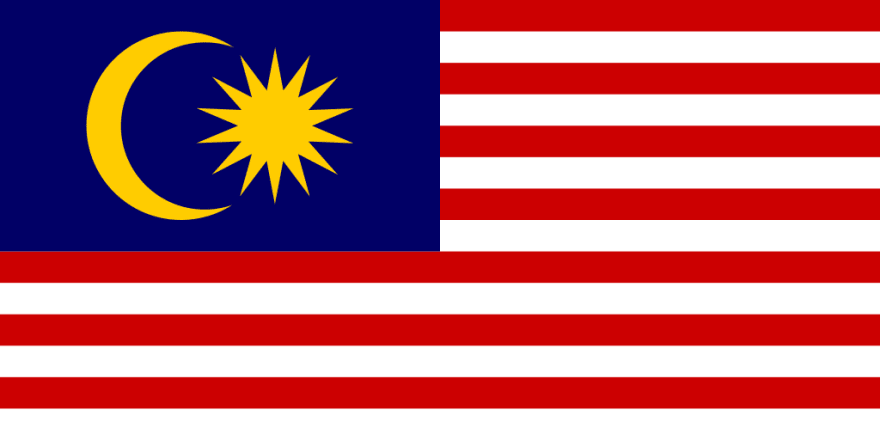 The flag of Malaysia, also known as the Malay: Jalur Gemilang ("Stripes of Glory"), is composed of a field of 14 alternating red and white stripes along the fly and a blue canton bearing a crescent and a 14-point star known as the Bintang Persekutuan (Federal Star).

Here are the components that I need to create using HTML and CSS:

Firstly, I am going to create the flag layout with CSS Grid.

It's pretty straight-forward, I will use grid-template-rows and grid-template-columns properties to create the flag layout with 2 rows and 2 columns.

Then, I will use grid-column: span 2 to expand the bottom column into a full row (or 2 columns).

What I need to do now, is to create 14 <div> and use CSS's :nth-child(even) and :nth-child(odd) rules to style the stripes.

But is there any other better method to do this? 🤔

Hmm … how about using repeating-linear-gradient?

The repeating-linear-gradient() CSS function creates an image consisting of repeating linear gradients. It is similar to linear-gradient() and takes the same arguments, but it repeats the color stops infinitely in all directions so as to cover its entire container. - MDN Web Docs

With that, I can use repeating-linear-gradient to create the 14 red-white stripes without writing 14 <div>! CSS FTW! 🎉

The crescent can be created using a circle with an inner shadow, which can be done using the inset value. (Thanks Google!)

That's the moment, I realized I have completely no idea how to create a 14-point star using CSS. (And I also forgot how to draw the 14-point star by hand 🤦‍♀️)

So after some simple research (aka Google Search), I found 3 ways how to draw a 14-point star:

Method 2: 14 triangles surrounded by a circle.

Ok, now I have found a way to create the 14-point star using CSS, the next step is to create 14 long diamond shape with different rotation values.

The long diamond shape can be created using 2 isosceles triangles. The code should look something like this:

The next step is to duplicate the long diamond shape for 6 more times, and add the CSS rotate function to it. As a result, the code should look like this:

Here you have it, I have successfully created the Malaysia flag using 30 lines of HTML and ~120 lines of CSS. 🎉

You can look at the full code on CodePen: codepen.io/limhenry/pen/mdbEGYg

However, this is not perfect yet. Few more things can be improved:

If you open the CodePen link in Firefox, you might notice the sub-pixel rendering issue (The weird line in the 14-point star).

However, it's actually possible to fix it using transform: translateZ(1px); (Refer to line 111). By doing this, the browser will render it using hardware acceleration or GPU acceleration, instead of the browser's slower software rendering engine.

😅 Issue #2: Flag is Not Responsive

This can be done with a few lines of JavaScript code, but maybe I can write another article just for this? 🤔

Anyway, it's time for me to go eat some Nasi Lemak 😋 Happy Birthday Malaysia! 🎉

Once suspended, henrylim96 will not be able to comment or publish posts until their suspension is removed.

Once unsuspended, henrylim96 will be able to comment and publish posts again.

Once unpublished, all posts by henrylim96 will become hidden and only accessible to themselves.

If henrylim96 is not suspended, they can still re-publish their posts from their dashboard.

Once unpublished, this post will become invisible to the public and only accessible to Henry Lim.

Thanks for keeping DEV Community 👩‍💻👨‍💻 safe. Here is what you can do to flag henrylim96:

Unflagging henrylim96 will restore default visibility to their posts.