Containers, specifically Docker, are all the rage. Most DevOps setups feature Docker somewhere in the CI pipeline. This likely means that any build environment you look at, will be using a container solution such as Docker. These build environments need to take untrusted user-supplied code and execute it. It makes sense to try and securely containerize this to minimize risk.

In this post, we’re going to explore how a small misconfiguration in a build environment can create a severe security risk.

It's important to note that this post does not describe any inherent vulnerability in Heroku, Docker, AWS CodeBuild, or containers in general, but discusses a misconfiguration issue that was found when reviewing a Docker container based, multi-tenant build environment. These technologies offer pretty solid security defaults out of the box, but when things start to get layered together, sometimes small misconfigurations can cause large issues.

A possible build environment could have the following architecture:

The Docker container could be created through Dind and in theory, you end up with two containers that an attacker would need to escape. Using CodeBuild minimizes the attack surface further as you have single-use containers supplied by AWS, with no danger of tenants interacting with each other's build process.

Let’s have a look at the proposed build process, and more specifically, how an attacker would be able to control the build process.

The first thing to do in most build/CI pipelines would be to create a git repository with the code you wish to build and deploy. This would get packaged up and transferred to the build environment and then passed through to the docker build process.

Looking at build services you usually find two ways a container can be provisioned - through a Dockerfile or a config.yml, both of which get bundled along with the source code.

A CI config file, let's call it config-ci.yml, could look as follows:

This file then gets converted into a Dockerfile by the build process, before the rest of the build kicks off.

In the case where you explicitly specify a Dockerfile to be used, you change the config-ci.yml to the following:

Now that the build information has been supplied, the build could be initiated. The build is normally started through a git push on the source repository. When this is initiated you would see output similar to the following:

As you can see, we have the output of docker build -f Dockerfile . being returned to us, useful for debugging, but also useful for seeing possible attacks.

The first idea that came to mind was to try and interrupt the build process before we even get into the docker build step. Alternatively, we could attempt to try and link in files from the CodeBuild environment, into our Docker build context.

Since we controlled the config-ci.yml file contents, and more specifically the "relative path to the Dockerfile to use", we could try an old fashioned directory traversal attack.

The first attempt at this was to simply try and change the directory being used for the build:

Once the build process started, we immediately got the following error:

Interesting, we have caused an error and have a path leak. What happens if we try and "read" a file?

And suddenly we have parsing errors from the Docker daemon. Unfortunately this will only give us the first line of files on the system. Nonetheless, an interesting start.

Another idea here could be to try and use symlinks to include files into our build. Fortunately, Docker prevents this, as it won't include files from outside the build directory into the build context.

In the above case, step 2/9 is executed in a new Docker container e7e10023b1fc. So even if a user decides to insert some malicious code into the Dockerfile, they should be running in a one-off, isolated container, unable to do any damage. This is depicted below; 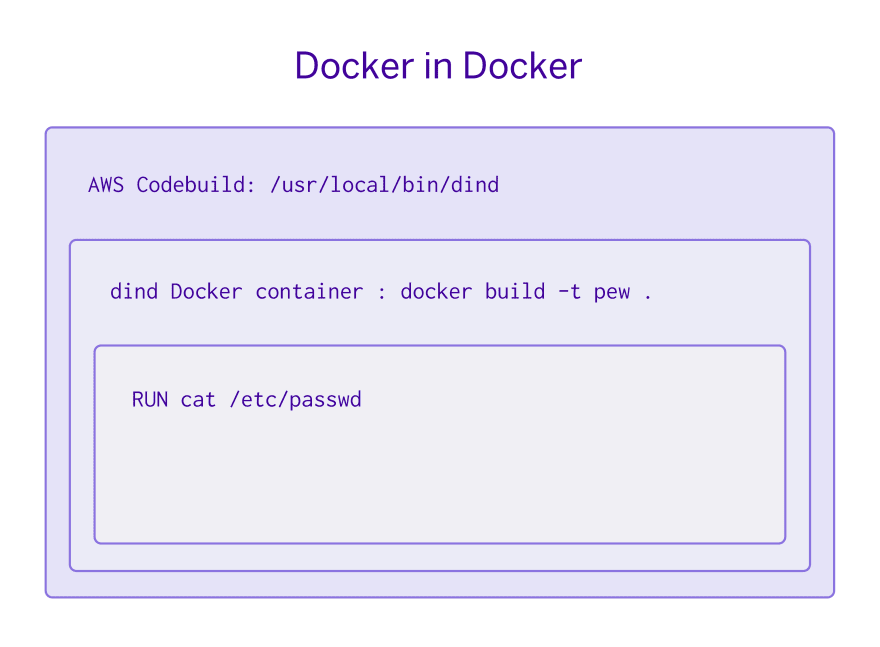 When issuing Docker commands, these are actually passed to the dockerd daemon which is in-charge of creating/running/managing Docker images. For dind to work, it would need to be running its own Docker daemon. However, the way that dind is implemented it uses the host system's dockerd instance, allowing the host and dind to share Docker images and benefit from all the caching Docker does.

What if Dind is started up with the following wrapper script:

Where /usr/local/bin/dind is simply a wrapper script to get Docker running inside a container.

The wrapper script ensures that the Docker socket from the host is made available inside the container. This specific configuration introduces a security vulnerability.

Normally the docker build process would have no way to interact with the Docker daemon, however, in this case, we are able to. The keen observer might notice that the TCP port for the dockerd daemon is also mapped through, --host=tcp://0.0.0.0:2375. This misconfiguration sets the Docker daemon to listen on all interfaces of the container. This becomes an issue due to the way Docker networking functions. All containers are put into the same default Docker network unless otherwise specified. This means each container is able to communicate with each other container, without hindrance.

To test this, the following Dockerfile could be supplied to the build system, allowing us to gain interactive access to the container being built. This simply allows for speedier exploration, rather than waiting for the build process to complete each time;

Yes, the reverse shell could be done in a bunch of different ways.

This Dockerfile installs a few dependencies, namely docker and netcat. It then copies the files in our source code directory into the build container. This will be needed in a later step and also makes it easier to quickly transfer our full exploit to the system. The mknod instruction creates a filesystem node that allows for redirection of stdin and stdout through the file. A reverse shell is opened using netcat. We also need to setup a listener for this reverse shell on an system we control with a public IP address.

Now when the build happens, a reverse connection will be received:

Now with remote, interactive, access, we could check if the Docker daemon could be accessed:

We specify the remote host by using -H 172.18.0.1. This address was used since we have discovered that the network range being used by Docker is 172.18.0.0/16. To find this, our interactive shell is used to do a ip addr and ip route to get the network assigned to our build container. Remember that all Docker containers get put into the same network by default. The default gateway would be the instance that the Docker daemon is running on.

Success! At this point we have access to Docker from within the container being built. The next step is to start up a new container with additional privileges.

We have a shell, but it is in the throw-away build container - not very helpful. We also have access to the Docker daemon. How about combining the two? For this, we introduce a second Dockerfile, which when built and run will create a reverse shell. We start up a second listener to catch the new shell.

When we re-run the build process, we would get our first reverse shell on port 4445, which leaves us in the build container. Now we can build Dockerfile2, which was copied into our build container with COPY * /files/;

A new Docker image is now built using the host Docker daemon and is available. We simply need to run it. Here there is an additional trick needed, we need to map through the root directory into the new Docker container. This can be done with -v /:/vhost.

In our first reverse shell:

A new reverse shell will now connect to port 4446 on our attacker system. This drops us into a shell in a new container with direct access to the underlying CodeBuild host's filesystem and network. This is because the --net=host will map through the host network instead of keeping the container in an isolated network. Secondly, because the Docker daemon is running on the host system, when the file mapping with -v /:/vhost is done, the host system's filesystem is mapped through.

In the new reverse shell, it's now possible to explore the underlying host filesystem. We could prove we are outside of Docker when interacting with this filesystem, by checking the difference between /etc/passwd and /vhost/etc/passwd.

Inside /vhost we also found that there was a new directory, which clearly indicates we are inside the CodeBuild instances filesystem and not just any Docker container;

The magic happens inside codebuild. This is what AWS Codebuild uses to control the build environment. A quick look around reveals some interesting data.

At this point, we would usually try and extract AWS credentials and pivot. To do this here we need to use the AWS_CONTAINER_CREDENTIALS_RELATIVE_URI

Depending on the permissions associated with that IAM, there should now be the opportunity to move around the AWS environment.

The above steps could be automated and done with only one reverse shell, however, remember that you need to keep the build environment alive. Having a reverse shell in here does that, but a long-running process should also do the trick. The main thing is you don't want the initial docker build to complete, as this will initiate the tear-down of your build environment. Also, note most build environments tend to give you 30-60min before they are automatically torn down.

The fix, in this case, is extremely simple, never bind the Docker daemon on all interfaces. Removing the line --host=tcp://0.0.0.0:2375 from the wrapper script takes care of this. There is no need to bind to a TCP port, since the unix socket is already being mapped through with --host=unix:///var/run/docker.sock.

Containers offer a great mechanism for creating secured environments in which to run untrusted code, without requiring additional virtualization. These containers are however only as secure as their configuration. They are pretty secure by default, but a single misconfiguration is all it takes to bring down the whole pile of cards. Build environments offer an interesting architectural challenge and you'll always need to think in terms of security layers.

Security researcher and hacker at Heroku

The Importance of Root Cause Analysis

If you are new to DEV, we are a software blogging site visited by over 2 million developers per month.