There are two types of proxies, forward proxy and reverse proxy.

A forward proxy (or gateway, or tunnel, or just "proxy") provides proxy services to a client or a group of clients. It allow users to hide their IP address while accessing a Web service or an API server. In contract, a reverse proxy is the opposite of what a forward proxy does. It is a type of proxy server that retrieves resources on behalf of a client from servers.

Further, this post focuses on a reverse HTTP proxy over WebSocket, in brief, it uses the WebSocket protocol as a "tunnel" to pass TCP communication from server to client. 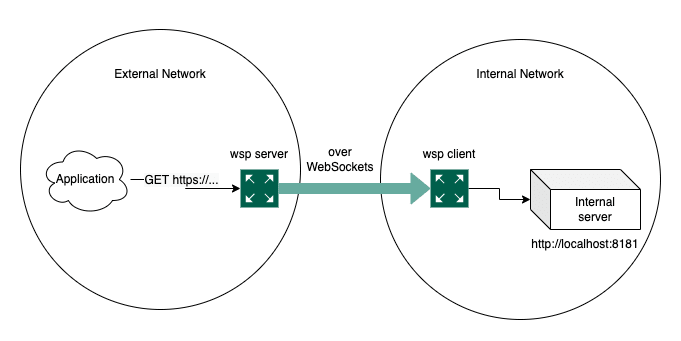 A case study in Go

There are not that many examples of implementation reverse proxy over WebSocket. In JavaScript, mhzed/wstunnel is well known, in Haskell, erebe/wstunnel is.

In Go, inconshreveable/ngrok and coyove/goflyway is well known, especially ngrok is popular among developers as a SaaS service.

In this post, we will focus on understanding the basic concepts and read prototypical and simpler one root-gg/wsp. wsp is developed by root-gg, which is a reverse HTTP proxy over WebSocket, whose aim is to securely make call to internal APIs from outside. It is difficult to use in production, but it is a good learning material to explain the design of reverse proxy over WebSocket.

However, maintenance has stopped since the days of Go 1.6, so I'll proceed with this post based on code hgsgtk/wsp that I forked and modified for the Go situation in 2021 (Thank you root-gg).

It's easier to get a general idea of how it works if you see it in action, so here's a brief demo. In the demonstration, the following four system component are introduced. 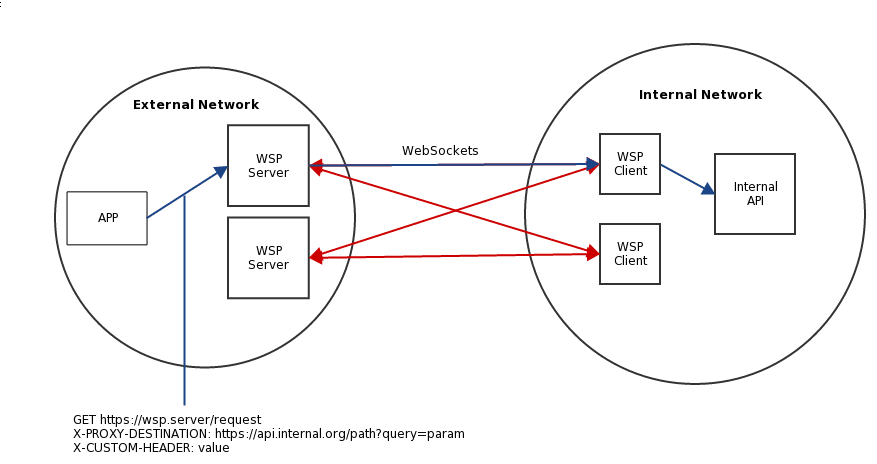 Try to send a request to the internal API via WebSocket communication to the endpoint /hello.

HTTP communication was relayed by the following route.

Here is a terminal image when sending a HTTP request from app. 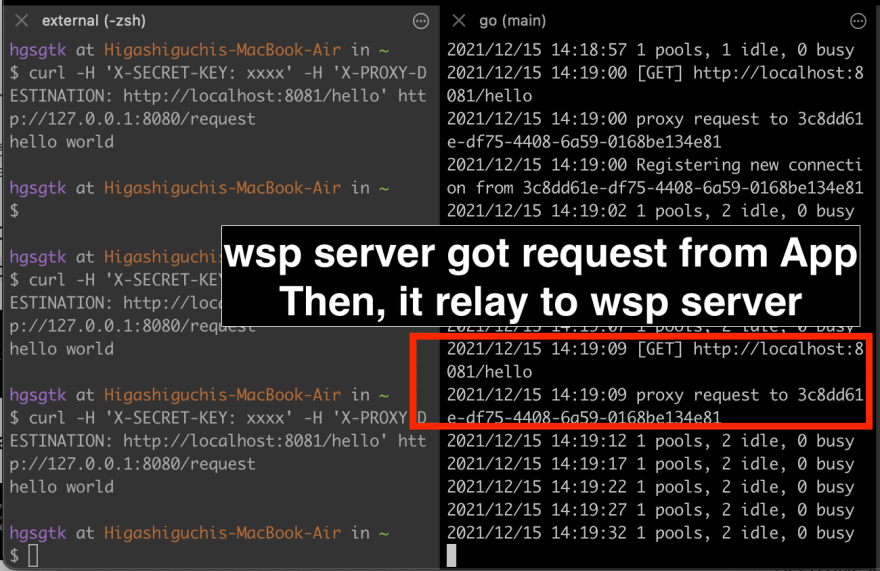 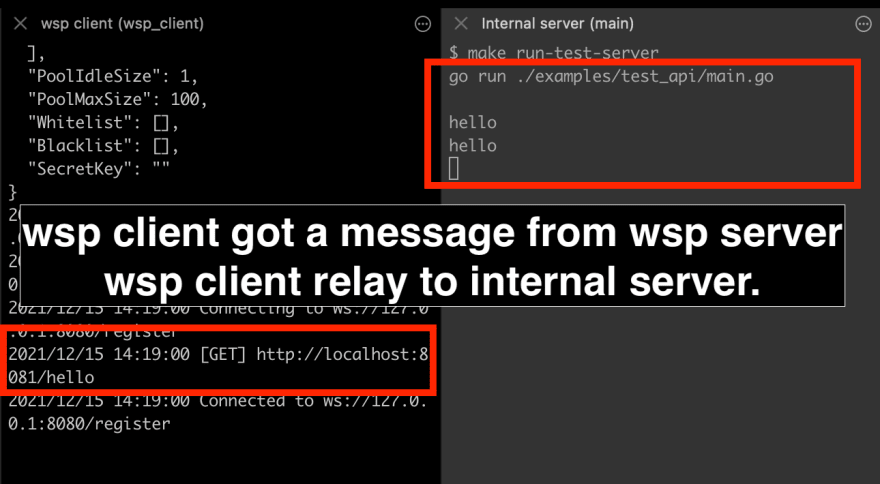 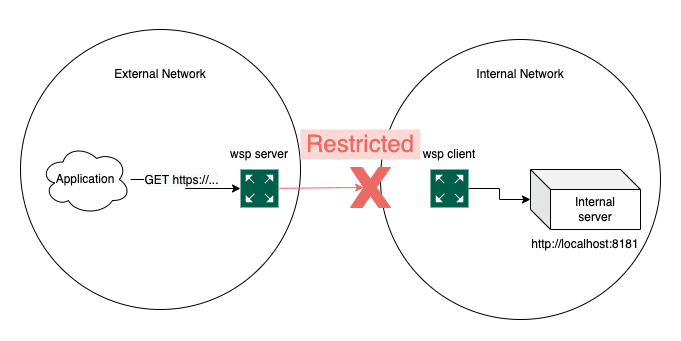 Therefore, the starting point is wsp client in the internal network. In this design, it starts with a request for a WebSocket connection from wsp client to wsp server. 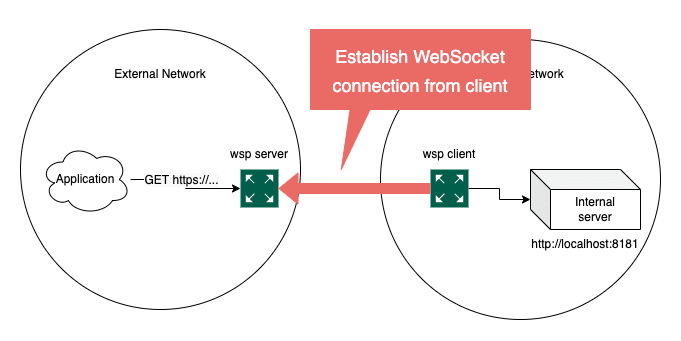 The following points to implement this design will be explained in this post.

I will explain the rest points in part 2 and beyond.

The first step is to start up a WebSocket server which waits for requests from WebSocket clients.

As a side note, WebSocket is a mechanism for low-cost, full-duplex communication on Web, which protocol was standardized as RFC 6455. The following diagram, quoted by Wikipedia, describe a communication using WebSocket between client and server. 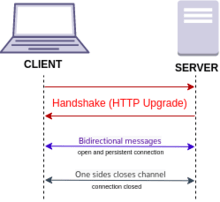 In the case of wsp, it starts like this.

Let's read the Go code. First is the main function (cmd/wsp_server/main.go), which is the entry point.

server.NewServer function returns a pointer of Server struct which represents a reverse HTTP proxy over WebSocket.

An important field is upgrader whose type is websocket.Upgrader to specify parameters for upgrading an HTTP connection to a WebSocket connection. In Go project, gorilla/websocket is widely used to implement WebSocket, and many samples using this library are available on the internet.

WebSocket is designed to work over HTTP. To achieve compatibility with HTTP, the WebSocket handshake uses the HTTP Upgrade header in order to change from the HTTP protocol to the WebSocket protocol.

In NewServer function, it creates a value whose type is websocket.Upgrader with default parameters.

Next, call server.Start function to start a WebSocket server.

In this code, an HTTP server that exposes an endpoint /request is set up at a given address. The handler mapped to /request is as follow (code):

There are several knowledges to implement WebSocket server, so I'll explain it line by line.

The first line is:

There are several patterns to implement authentication, and Heroku Dev Center - WebSocket Security describes one pattern - "ticket" -based authentication system.

There are several options for where and how to tell the "ticket" from the client to the server. A commonly used method for simple authentication is to set the relevant ticket in the HTTP header. For example, Amazon API Gateway provides the option to require API clients to pass the API key as the X-API-Key header.

The sample code implements a similar concept. It validates the value in the header X-SECRET-KEY at initial handshake.

Also, depending on your business requirements, there are several options for how to issue the "ticket". A idea is to issue "ticket" (or access key, or access token) in advance on their administration UI. Or if the process of asking where the WebSocket server to connect contains before handshake, it is also good idea to issue a one-time "ticket" by "access token" which is issued in advance.

In "ticket" -based authentication system, the server authenticates only at initial handshake, but there is also an idea to authenticate every message. See Klee Thomas's post Authenticating Websockets more detail.

After authentication, upgrade an HTTP connection to an WebSocket connection.

websocket.Upgrader.Upgrade function does it. To put it simply, it checks if the handshake request from the client is valid and returns a successful handshake response if it is.

If you want to know the internal implementation of Upgrader.Upgrade function, see Learn WebSocket handshake protocol with gorilla/websocket server.

This post explained how to start a WebSocket server and WebSocket specification and security considerations to establish a WebSocket connection.

I will explain the rest points in part 2 and beyond. 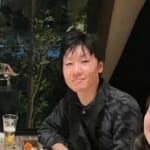 Once suspended, hgsgtk will not be able to comment or publish posts until their suspension is removed.

Once unsuspended, hgsgtk will be able to comment and publish posts again.

Once unpublished, all posts by hgsgtk will become hidden and only accessible to themselves.

If hgsgtk is not suspended, they can still re-publish their posts from their dashboard.

Once unpublished, this post will become invisible to the public and only accessible to Kazuki Higashiguchi.

Thanks for keeping DEV Community 👩‍💻👨‍💻 safe. Here is what you can do to flag hgsgtk:

Unflagging hgsgtk will restore default visibility to their posts.