During the past month, I have created a specific style for generating cycling maps, using only publicly available data.

In July and August, I was on holyday in Poland, Slovakia and Hungary. For finding the way in those countries, I had a map (good old paper). I was cycling from camping to camping, so a good map was required. Unfortunately, Poland and Hungary had no good maps made for the purpose of cycling. That means that sometimes I could not find the way, and needed to use a mobile phone (mostly using the app Maps.Me with data of OpenStreetMap).

This problem stayed in my head. I am very enthusiastic about projects like OpenStreetMap, which collects and publishes the data for free (license: ODbL). The data quality is usually great, and the map details are far greater than for example Google Maps, Apple Maps or TomTom. Also, the data is updated very quickly if something changes, all by volunteering contributors.

The goal of this project is as follows: “Generate a printable map of any region in the world, using only publicly available data and tools, usable for cycling.” The process described in the following sections is the end result of this project. It took some weeks to learn about the technology, tooling and data. Then, by trial and error, the resulting map was improved step by step.

To reach the project goal, some tooling is needed. Fortunately, many people have gone before me that have a lot of knowledge about generating maps. I collected this knowledge from blogs, guides and websites.

For this project, I used the following stack:

The data comes from two places. The content of the map (roads, features, land use, etc.) comes from OpenStreetMap. That data has been refined (sorted, filtered and grouped) by GeoFabrik. This means that ambiguity of some data is removed, and the data is labeled in a structured way. Also, they publish a nice document describing the structure of the data. For each country (and sometimes part of the country) a separate zip file must be downloaded.

The other required data is height data. This data is used for generating contour lines and ‘hillshading’ (if there is a steep hill, it is colored a darker shade on one side). The height data of the world is available from a number of different sources, but I get it from here. The data is measured by NASA satellites of the Shuttle Radar Topography Mission (SRTM) project.

Finally, I use the OpenStreetMap data a second time. This time, it is downloaded from another source. For the borders of countries, the GeoFabrik data is not usable (their free service doesn’t have this data, but their premium service does). The boundaries are downloaded from wambachers-osm.website instead.

A common way for spatial data (any data with a location attached to it) to be formatted is shapefiles. A shapefile describes vector data, a point, line or polygon, possibly with attributes. For example, a shapefile containing roads will contain lines with the shapes of the roads, and attributes with the name of the road and the speed limit. The lines can be used on the map, and the attributes can be used to style the data differently for each type of road. Each set of data has multiple files, each with a different responsibility. Most GIS applications and scripts can work with shapefiles.

For our use case shapefiles would work, but they are limited in their performance and possibilities. For example, if I want to create a map that spans multiple areas or countries, I would have to change the script to add more data sources. That is why all shapefiles are imported into a Postgres database. Shapefiles with the same kind of data are imported into the same table, and can be queried once to find all the data of that type for the map.

The height data also has to be processed. The height data does not come as a shapefile (it does not have a vector shape), but rather as a raster file. It can be seen as a large grid of ‘pixels’ having some value. In addition to the value, each pixel can have attributes, just like shapefiles. The SRTM3 data has a file per latitude and longitude degree squared.f

The height data is processed in two ways. First of all, the contour lines are generated from the height raster. The GDAL libraries are used for this. The interval of the contours can be specified (I use every 20 meters). The result is a shapefile, containing lines for each contour, with a height attribute which can be used to style the contour on the map.

In addition to contour lines, I also generate the hillshading. This is also done with the GDAL libraries, with the hillshade command. Note that the result is not a shape file, but another raster file. The raster file contains the ‘shade’ of the hill, a value between 0 and 1 depending on the orientation and steepness of the slope. The defaults work well: the light source comes from the north west (default for many maps), at an angle of 45 degrees.

Once the data is ready, the map can be generated by making style for each part of the data. The description that follows took many steps, and manual checking of the rendered result. This styling is in no way perfect, but at least optimized for cycling.

Each section below can be seen as a layer (actually, they are the names of the Mapnik layers). The first layer is on the bottom, and every following layer is printed ‘over’ it. Sometimes I use a transparent layer to add information to the map, while keeping the information under it visible.

The background of the map will be white, with an overlay of forest (light green).

Two special types of land use are added after the hillshading. Cities (with residential land use), and military areas are marked especially. Cities need to be visible on the map: they give structure to the road network and names. Military areas are off-limits for civilians. 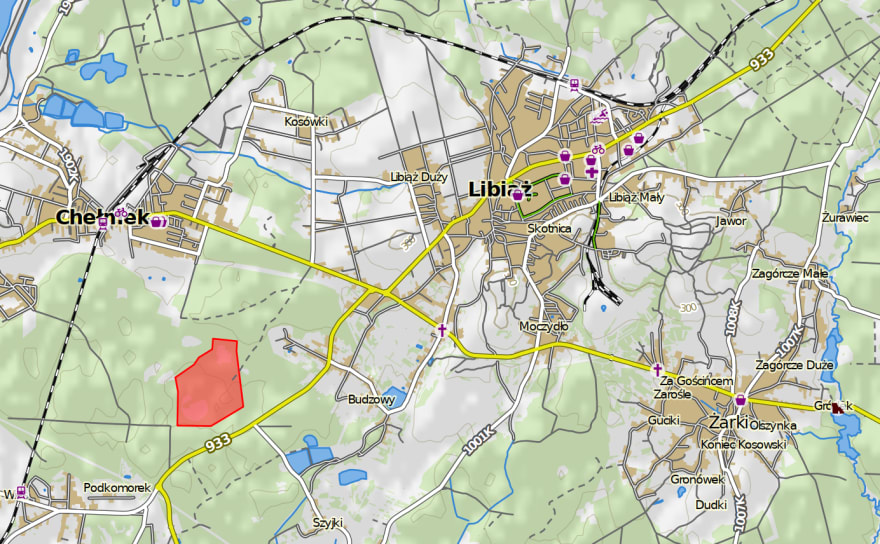 Borders of countries need to be visible. They get a transparent thick background such that they are easily visible in the large-scale structure of the map. 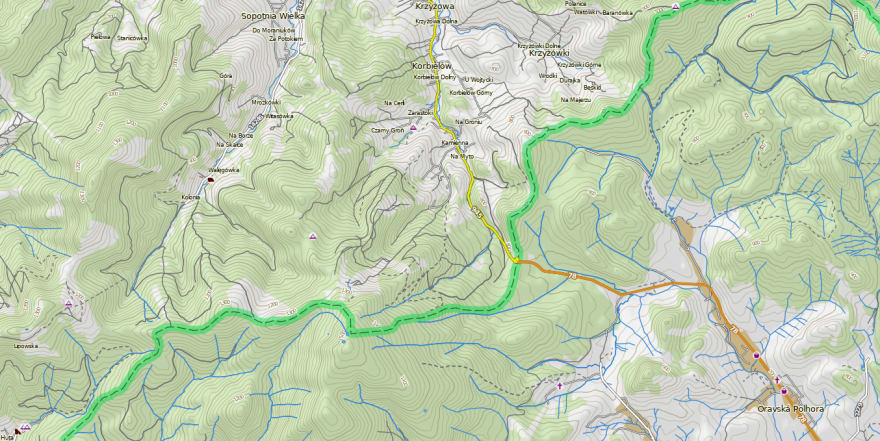 Water is important to get a good overview of the area (together with forest areas). Lakes give structure to the map, and streams and rivers also give information on hills, mountains and valleys. Rivers and streams always flow perpendicular to contour lines, and parallel to valleys.

Train tracks show connections between large cities and towns. They are visible in the landscape because they are long and straight. Stations are often listed on road signs. 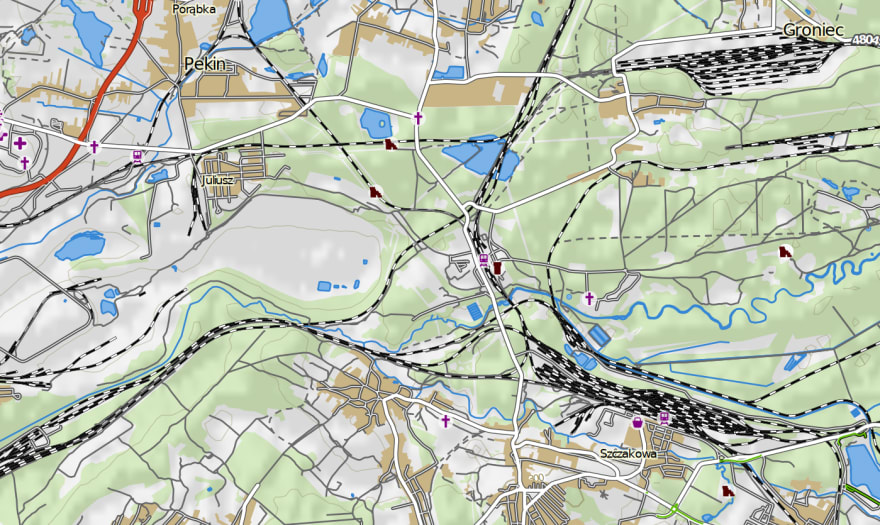 Most of the work has been done on roads. They sound easier than they are, because there are many types and they connect with each other.

The general idea for roads is “more important is on top”. That means small paths first, then dirt roads, then general small roads, then tertiary roads (small roads with a name), then secondary roads, primary roads and trunk roads (between a primary road and motorway, the use differs per country). Finally, motorways. And to make things hard: cycleways need to be visible over every kind of road, but not too invasive.

But that is not always the case:

These requirements make a beautiful list of (some repeated) styles for roads and their borders. 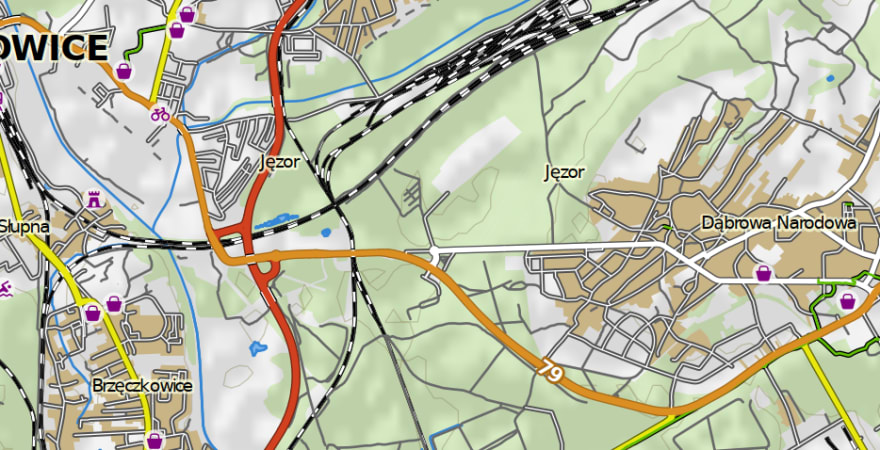 Names of cities, roads, and contours

One of the primary features of a map is the names of the things on the map. Cities are the most important: they give information on where roads lead. All names of cities, villages, hamlets and even suburbs of cities are printed.

But roads also have names (references). They are often listed on road signs. If there is space on the map, the names are printed along the road.

Finally, the contour line heights. They have little priority, but can give context how high the surroundings are. If there is any space left on the map, the heights of the 100-meter contour lines are also printed. 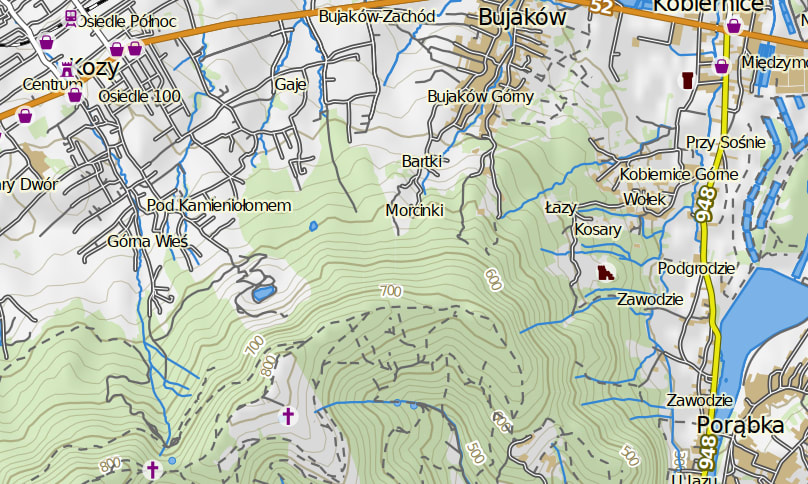 The last layer of the map are icons of places of interest. Especially in a city they can be good references (think of churches with a high tower). I have selected a list of places of interest that do not clutter the map too much, and give enough information to be useful. The map contains places of worship (churches, mosques, synagogues, etc.), shops, bicycle repair shops, campings and castles.

Each icon has a circle background (partly transparent) to make it more visible in the whole.

In Mapnik the layers above can be defined using a Python script. For each layer a data source is used, and the features of that data source are printed on the map using some style. The features can be filtered such that a style is only applied to some features. For example: the data source for roads contain all roads. It has many styles, for example one for primary roads which are a bridge.

The Python script creates all layers, and Mapnik generates an XML of the description of the map. This XML file is portable and can be used directly by anyone, without running the Python script.

Using the map description (either from the XML file of from the Python script), Mapnik can output many kinds of images. It has many options for JPG and PNG files, but it can also create PDF files. That is useful for vector features with infinite resolution (good for printing).

Scripting it all together

In addition to the Python script for creating the map, I have also made a bash script which downloads the data required for the map in an automated way. For some areas multiple files have to be downloaded and processed, and this is cumbersome to do by hand.

This makes running the scripts for a different set of countries easy: only the names of the countries, and the latitude/longitude ranges of the map are needed.

This is the end result of the map. 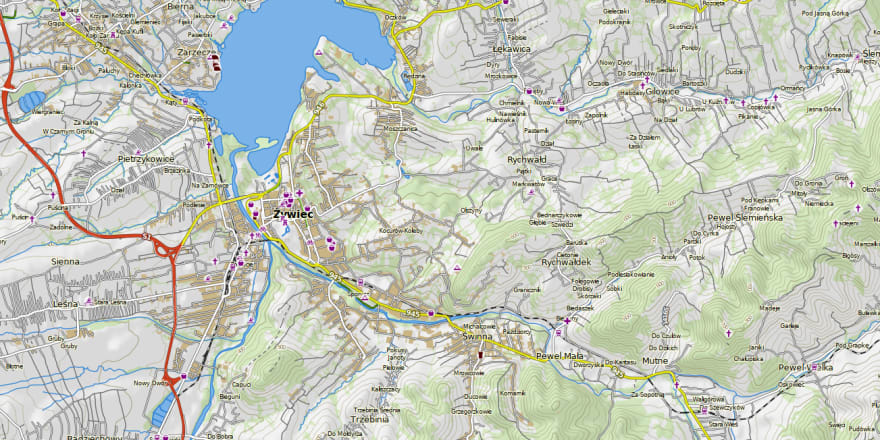 For me, this is a long time wish which has come true. I just needed a problem for which generating a custom map was the solution. I plan to use a printed version of my own map the next time I go on a cycling holiday, and test it in the real world.

The source code and scripts can be found on in the GitHub repository. Feel free to leave comments and suggestions for improvement!

Generating a custom cycling map with Mapnik and Carto

View the blogpost describing this project at https://dev.to/hiddewie/creating-a-custom-cycling-map-3g2a.

There are three scripts in this repository:

See the environment variables which can be configured for the scripts below.

Make sure you have a running Postgres database, with a gis schema with GIS extensions enabled.

to download the data and insert it into the database. Make sure that the environment variables listed below are set.

Once suspended, hiddewie will not be able to comment or publish posts until their suspension is removed.

Once unsuspended, hiddewie will be able to comment and publish posts again.

Once unpublished, all posts by hiddewie will become hidden and only accessible to themselves.

If hiddewie is not suspended, they can still re-publish their posts from their dashboard.

Once unpublished, this post will become invisible to the public and only accessible to Hidde Wieringa.

Thanks for keeping DEV Community 👩‍💻👨‍💻 safe. Here is what you can do to flag hiddewie:

Unflagging hiddewie will restore default visibility to their posts.