So the other day I went to my grandma’s place to explain to her about APIs.

If you’re a student studying Computer Science or someone who’s trying their luck getting into the software industry, one might often encounter the phrase API. API stands for Application Programming Interface. It is an integral part of software development. To understand APIs, let’s start with the last word in the acronym — Interface.

What is an Interface?

An interface is a layer (or an abstraction) wherein most of the underlying functionality is removed from the eyes of the user, and provides a simple platform to the user to interact with the entity, such as a TV!

We use a TV remote to change the channels, control the volume or the brightness of our display. Here the TV remote acts as our interface to the TV. We, as the end user, can control all the functionalities of our idiot box using only the buttons present on the TV remote without even knowing HOW it is done.

Ever heard of the term GUI? A GUI — Graphical User Interface, provides an Interface which makes it easier for the user to operate a particular program.

Similarly, for developers, most of the components are reusable, which are abstracted and accessed via an Interface, for Application Programming. Hence, the API.

APIs provide the required data and abstracts most of the implementation by the underlying code to the software developer, which saves a lot of time, developmental costs and in general, a lot of work, if done from scratch.

Today, it’s safe to assume that whenever we hear the word “API” it’s mostly a web-based API, but APIs constitute a much larger demographic. For example, if converting a string to uppercase, any programming language provides a method to achieve it. That’s APIs in action. We can do the same by manipulating in the low level bits, but by using APIs is much easier, faster and more convenient.

Likewise, Frameworks provide an API to developers for faster development for their applications. These APIs perform a ton of work for us, instead for the developer to reinvent the wheel. All we need to do is provide the required data to the framework API for it to work.

As we all now know that APIs do a lot of work for us by abstracting a ton of things under the hood, as technology evolved, so did APIs.

Say if a user wanted to find today’s weather, the user obviously doesn't have an inbuilt barometer in his phone or wires connected to the local weather station from his phone. The user can just use a weather app which uses the location from the user’s phone’s GPS and sends it to a remote web-based API which in turn responds with the current weather data to the user’s phone.

Remote APIs are constructed by developers using several approaches. The most popular one is REST — Representational State Transfer. The APIs that utilise this approach are said to be RESTful.

REST API is so popular that if people refer to any API, they usually mean it as a RESTful one.

There are different types of devices, desktops, smartphones, servers, gaming consoles etc, that are connected to the internet. One might wonder, how come a smart refrigerator in South Korea is able to talk and get data from a weather sensing station somewhere in the Hawaii through the internet? There must be some kind of common language, a rule or in geeky terms — a protocol.

Let me introduce you to the Hypertext Transfer Protocol or HTTP, in short. HTTP is the common protocol (or rule) where in all the devices no matter their underlying design, when connected to the internet, use it to communicate with each other in a way they could understand.

In Hypertext Transfer Protocol, as the name suggests, transfers something called ‘Hypertext’.

For our reference, lets limit our understanding of a Hypertext as a document that contains some text and links that are displayed on a computer screen (or similar devices) which can be accessed by a user easily.

This Hypertext is usually obtained by sending a request from a client (your computer) to a remote server (some other computer connected to the internet) which then responds with a Hypertext document containing the data.

An HTTP request should be accompanied by an HTTP verb — GET,POST,DELETE etc., usually by default it is GET. But again this blog isn’t about HTTP requests or computer networking, so for our reference, let’s assume GET is used to retrive the data from the server, POST is to send and DELETE is to send a request to delete data on the server.

Okay now, what can we do with APIs?

We can practically build any app for any purpose that we can think of!

In the next blog, I’ll call one of these APIs to GET the data using several methods. Till then enjoy this comic: 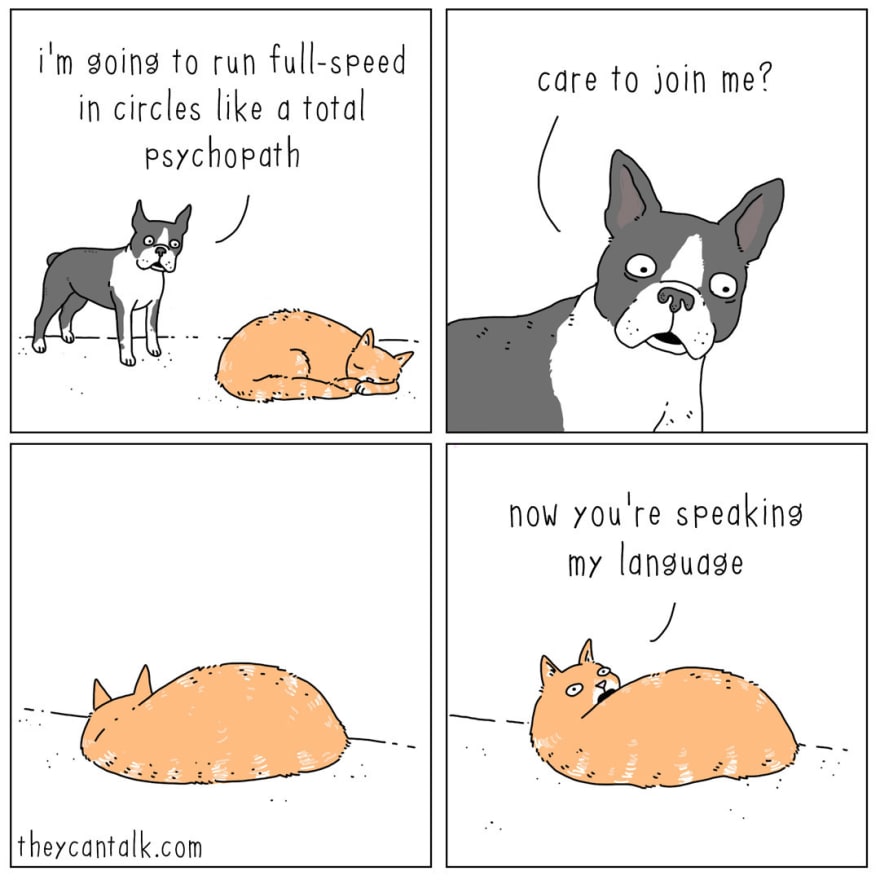 Harish Pillarisetti
Your friendly neighbourhood developer-man 💻. I try to get my hands dirty if it's JavaScript 💛. Fuelled with caffeine, dark humour and dank memes.
Save your clients internet, Serving big JSON dataset files over network like a pro
#javascript #webdev #react #database
Essential Design Patterns in Java
#java #designpatterns #programming #beginners
I Created An Animation To Understand The Event Loop In JavaScript 🤯🔥
#javascript #webdev #react #html

Once suspended, hpsetti will not be able to comment or publish posts until their suspension is removed.

Once unsuspended, hpsetti will be able to comment and publish posts again.

Once unpublished, all posts by hpsetti will become hidden and only accessible to themselves.

If hpsetti is not suspended, they can still re-publish their posts from their dashboard.

Once unpublished, this post will become invisible to the public and only accessible to Harish Pillarisetti.

Thanks for keeping DEV Community 👩‍💻👨‍💻 safe. Here is what you can do to flag hpsetti:

Unflagging hpsetti will restore default visibility to their posts.