It's been a while since the first post about scaling web applications using django, last time we spoke about some basic concepts about scalability, buzz words we hear everyday and we also use but always struggle when we need to give a formal definition to someone.

Once we have clear basic concepts about scalability, performance and we are familiar with the Pareto Principle, we are ready to start optimizing and improving our system's performance, right?. Not so fast cowboy!, if you remember the Pareto Principle most of the negative performance impact is coming for 20% of the negative impacters. We need to manage somehow to solve that 20% so we are sure we are making a significant improvement.

You can't manage what you don't measure - Peter Ducker

This means, we need to gain visibility inside our system to be able to detect those bottlenecks and work on solving or easing them. For that, we will need a set of tools to monitor and profile our application.

There are a lot of monitoring tools for Linux and for django out there, you can use the ones you like the most, but I'm going to showcase some here as a starting point. I'm not going to go deep into how to install them and set them up or customize them because it's out of the scope of this post, but I might post some individual howtos later, here I'll just point you to the corresponding documentation.

This is my all time favorite, it's a pip-installable module for django and you'll need to add some settings variables and a template tag and you're done. 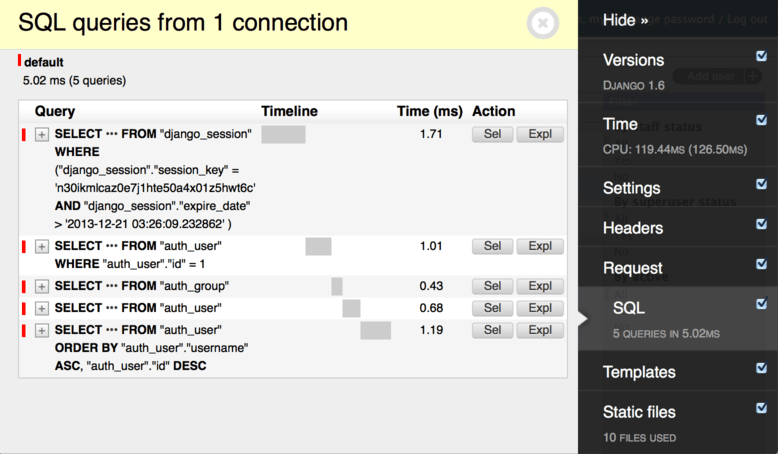 As you can see on the screenshot it will give you a lot of relevant information about what happened under the hood to serve that request, it will tell you the missed cache hits, which static files and templates are being served, the current request headers and request parameters but my favorite feature is the SQL viewer, it will show you the queries that ran on that view, with a timeline and their run time so you get to see which ones are taking long time and take action, it gives you also the option to see an EXPLAIN of the query to check what the query planner did.

To install it and use it, you can refer to the official docs

This is a visual profiler for Python, although it isn't made for django, you can plug it in and take advantage of all the cool graphs it will draw for you out of the box.

A profiler will measure how your code is behaving and tell you where the hot points are as well as your call stack, vprof will give you an insight also on how much memory your program is consuming so it's easier to detect memory leaks.

Here are some of the graphs vprof will produce for you

To set it up you can refer to the official docs

Setting up vprof for django might be tricky depending of your application architecture and setup, CProfile is pretty much the defacto standard on Python profilers, it will produce an output on an standard format you can plug into any profiling reporting tool such as SnakeViz to produce cool graphs that will help you understand what's going on.

You can easily set it up in django by using django-cprofile-middleware this app will also add one endpoint any staff user can hit to get data about the performance and, also, CProfile can produce an output file you can pipe into SnakeViz

This is an external stats collecting system built by Etsy, they blogged about it and how it works and it's also open source, you can set it up in django through a third party app called django-statsd.

Using this is a bit manual, you will need to send out your stats the same way you use log statements to add entries with messages about what your system is going. In this case what StatsD will do is keep a log on counts and timing of the events you are sending stats about. 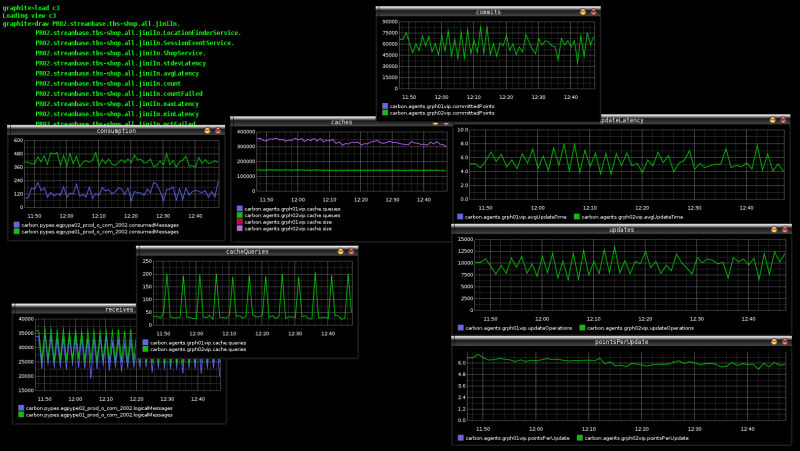 Use the logging subsystem

Logging can save you a lot of time if you do it right, it can also clutter your code with logger.info() statements everywhere if you over do it, you need to log everything so you know what your app is doing at each step of the different processes it performs, but log even more on the critical ones.

These log files need to go somewhere, maybe you're familiar with syslog to concentrate your logs in a single server so you have only one place to go when you need to do some text-processing-fu with sed, awk, sort and grep, but as your system grows and also the amount of different loggers storing messages, it will get trickier and trickier to keep track of every action across all the different modules of your system, an ELK system can help you to ease the search through your log files and also generate reports and graphs on top of your log data using Kibana.

You can read more about the ELK or Elastic stack here

If you have some budget to invest on this, newrelic will give you most of these features out of the box just by installing and setting up their Python tracker, it will start pushing data to newrelic and you can see your system's performance in real time, it will show you data such as the average response time as well as response time in percentiles, average throughput, average error rate, error data and even transaction data like the one you get from django-debug-toolbar.

If you have the budget, newrelic is a no-brainer it will be a valuable tool for you and your team and save you a lot of time when you need to debug a live issue.

Before you even think of optimizing anything, you need to measure, there is no point in blindly going through the code and, for example, indexing fields in your models if you don't know the impact of that, if any at all. The tools mentioned here are not a definitive guide to profiling django applications but they provide a nice starting point to begging playing with them and choosing which ones work for you and which ones doesn't so you can improve your tool belt, your stack and the quality of the products you're building.

Monitoring and measuring shouldn't be an optional thing, it should be there if not since day one, at least added within the first months of life of your project, that's the only way you get to see inside your application, detect bottlenecks and potential bugs, debug them, measure their impact, prioritize them and be sure that by rolling out the optimizations you will have an improvement of ~X percent in your performance.

Once suspended, iferminm will not be able to comment or publish posts until their suspension is removed.

Once unsuspended, iferminm will be able to comment and publish posts again.

Once unpublished, all posts by iferminm will become hidden and only accessible to themselves.

If iferminm is not suspended, they can still re-publish their posts from their dashboard.

Once unpublished, this post will become invisible to the public and only accessible to Israel Fermín M..

Thanks for keeping DEV Community 👩‍💻👨‍💻 safe. Here is what you can do to flag iferminm:

Unflagging iferminm will restore default visibility to their posts.