One of my hobbies is making electronic music, and thanks to resources like samplesfrommars.com, I have tons and tons of audio files to manage. One drawback of the my main drum machine is that it limits readable filenames--anything after a certain number of characters is cut off, and any name-collisions will point to the first file with that name.

A lot of my music sample library has folders full of long, repetitive filenames, like this: 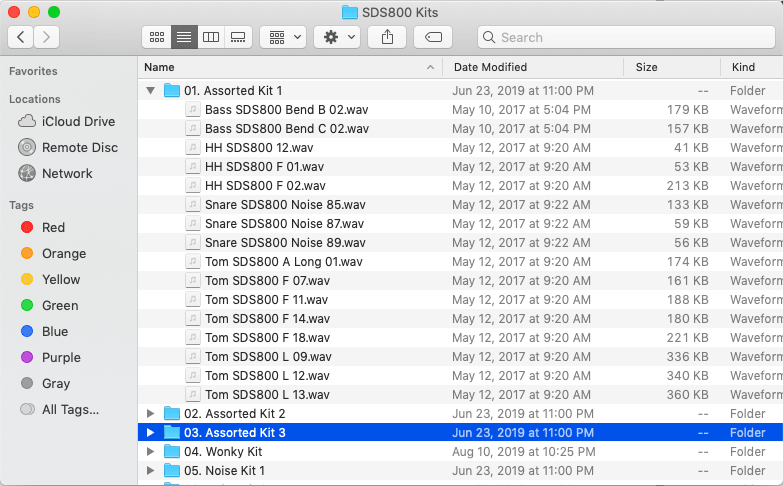 I got really tired of renaming them one-by-one, so I wrote my first Python script, file-renamer, as a CLI to do mass-renaming!

Basically, I wanted a way to change or remove specific strings from multiple filenames at once. As a CLI, file-renamer also provides a way to navigate a filesystem to modify files in different folders quickly and easily from the command line.

After cloning the repo to your computer, you can run file-renamer with $ python3 script.py in the repo's directory.

The only configuration you will need to do is setting a default path. See script.py line 37 (as of this writing) for the code to change:

You can navigate your filesystem using the standard Unix commands pwd, ls, and cd. Renaming is done inside a particular folder with the rn or rn all commands. To quit, enter q or quit.

Note: Currently, rn all will replace the LAST matching instance of <string_input> encountered in the filename (i.e. first match encountered when reading right-to-left). See str.rpartition() in the Python docs for more information.

The functionality of this script is powered by Python's pathlib, os, and os.path modules. Here's how they're used:

All of these methods return strings which can be passed to pathlib.Path(str) to create a Path object, which is similar to a string but has different functionality:

In the file-renamer code, here's how they are implemented:

Otherwise, when user input is cd followed by something else, new_path is a string created by using os.path.join to add the contents of user_input onto the end of current_directory.

In the snippet above, we also see that os.path.isdir() is used to throw an error if no directory is found.

The os.path module provides a number of useful validation methods, including two which are used in this script:

In addition to the above snippet, we see os.path.isfile() in action here:

Hilariously, the core functionality of this whole CLI boils down to one simple os method:

Yep, that's it. Supply a string for src and dst, and os.rename() will take care of changing the filename.

Here's how it's used in the code:

Here, src.rpartition(input) allows us to search the filename-string src from right-to-left, searching for a match for the string input. If found, that one instance is replaced with the given string output, and reconcatenated as the string dst. Calling os.rename(src, dst) will change the filename in your system.

Note: This method currently encounters errors when a file does NOT contain the given input! Instead, it will continue searching with .rpartition() until it finds a match in its parent directories, potentially causing directory errors! You've been warned...

That's it! Now you're ready to mass-rename your files! :)

Once again, here's the link to the GitHub repo: https://github.com/isalevine/file-renamer

Please feel free to fork/clone/hack apart as you wish! If you do, I'd love to hear how you're using the script, whether it's for music sample libraries or something else entirely.

If you'd like to tackle some specific issues with the current code, here are a few on my list:

Thanks for reading! Please feel free to share any tips or advice for working with Python's pathlib, os, and os.path modules below!

Once suspended, isalevine will not be able to comment or publish posts until their suspension is removed.

Once unsuspended, isalevine will be able to comment and publish posts again.

Once unpublished, all posts by isalevine will become hidden and only accessible to themselves.

If isalevine is not suspended, they can still re-publish their posts from their dashboard.

Once unpublished, this post will become invisible to the public and only accessible to Isa Levine.

Thanks for keeping DEV Community 👩‍💻👨‍💻 safe. Here is what you can do to flag isalevine:

Unflagging isalevine will restore default visibility to their posts.