As a studying web developer, once you learn to query external APIs to display data in your UI, a whole new world opens up.

When interviewing for UI developer positions at various companies, I would say something like, "just give me the endpoints and I'll handle the rest ;)".

With HTTP requests, I can get data, I can post data, and I can delete data. I do it all - I am definitely a fit for your team whether you know it or not.

This sounds great in the echo chamber of my mind. I distinctly remember feeling like a champion developer because I knew how to send requests to REST APIs.

Then, they had me make a chat application.

The Issue with Polling

If you're like me, you didn't understand how chat apps worked when you became a web developer. You might've thought, hey I'll just send a GET request every half-second or so to retrieve the recent chat messages.

This is called polling, and it'll work for a little while. One of my clients couldn't tell the difference, so long as there were only a couple users.

This function would be executed on some interval inside a singleton that exists inside the scope of our web application. If we wanted to kill the polling we could call clearInterval(clearIntervalId).

And what if some threads have hundreds of messages? That is a ton of needlessly large requests for a simple chat app.

The problem here is that the use of polling assumes that there is no way for a client like our browser to subscribe to a server. We can do better with a little networking.

Let's start with some networking basics, what is a socket?

A TCP socket is an endpoint instance defined by the combination of an IP address with a port, in the context of either a listening state (a server) or a particular TCP connection (a client, like your browser).

A TCP connection is defined by the pairing of two sockets.

There are three main kinds of transports that we commonly use in browser web applications:

Here's a diagram I stole from High-Performance Browser Networking, which illustrates the communication flow between each of these transports. It's a good book to check out if you're serious about improving the performance of your web apps. 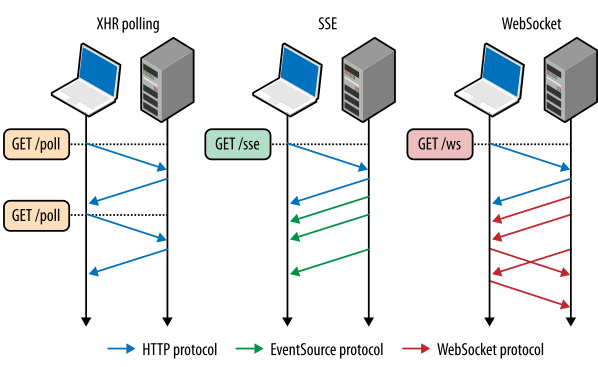 In most tutorials that deal with external data, you'll deal with the left-most paradigm's HTTP requests. Actually, all of these flows are initiated with an HTTP request, as shown by the blue arrows.

I don't commonly see articles or tutorials on SSE, but MDN has a good reference in case a one-way data stream sounds intriguing.

The third flow is most interesting to us - it gives us the ability to communicate with the server over a single long-lived connection.

As described by the Mozilla Developer Docs,

WebSockets are an advanced technology that makes it possible to open an interactive communication session between the user's browser and a server. With this API, you can send messages to a server and receive event-driven responses without having to poll the server for a reply.

That's fantastic, we don't need to do any polling! But how does it work?

The lifecycle of a WebSocket connection between a client and server goes like this. Imagine our server is hosted at https://api.example.com on port 8080 and our client is someone's browser.

In JavaScript, we can connect to a WebSocket server like this:

We can invoke the built-in WebSocket constructor to create a connection, at which point we can set up the event handlers to decides what happens when a message is received.

We can also send messages, what if we had an input element that the client could enter text to chat with other users? That sure would be useful.

Better yet, what if we wanted to communicate more complex data with a message type and a timestamp, perhaps in the form of JSON?

With a little DOM manipulation, we are not far from a somewhat real-world chat application. Chats are neat and all, but what else can we do with this technology?

Other Applications of WebSockets

For this chat example, the application of WebSockets is obvious: send and receive text messages.

If you frequent dev.to then you might've noticed that they have a contest going on, called Build a Realtime App with Pusher.

The Pusher API is built on the basis of WebSockets. Some of its use cases include:

Personally, I'm thinking of building a cloud markdown editor that'll help me with editing and sharing posts in a single place. I'd store my markdown content on a server and ideally be able to view/edit it from my Mac or my phone.

If I want to share a post with someone to edit, I'd drop them a link and I'd be able to see their cursor and notes in real-time, similar to how a Google doc works.

Of course, part of the fun for me is implementing the server myself. Whether I'd consume a service like Pusher will depend on my productivity/pain with the implementation.

If this intrigues you as well, you may find these links useful: