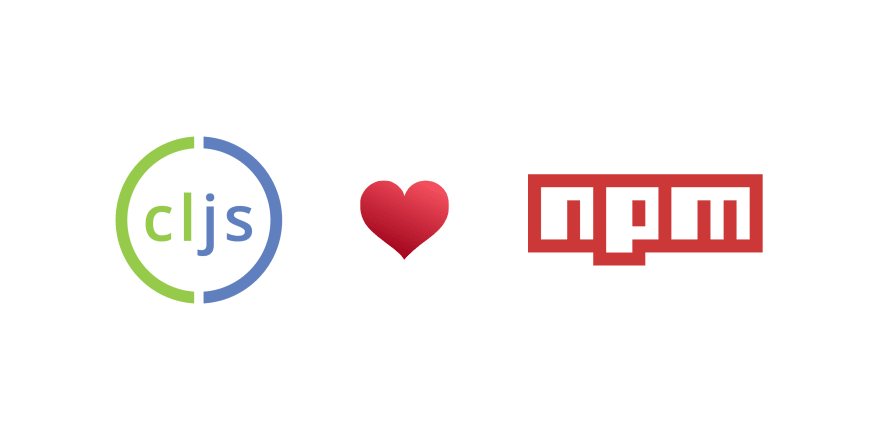 Every languge that complies/transpiles to JS want to connect to npm to use this huge ecosystem. The master of this is of course Ecma Script. The second one - in my humble opition - is ClojureScript, due to shadow-cljs.

Disclaimer: I know there is a lot of work going on in differnt communities that tap into npm. By all means I don't try to diminish any of that and state that CLJS (ClojureScript) is the best . I want to give you a glance how this works in ClojureScript.

In ClojureScript we would install npm packages as we would in JavaScript. We would use standard package.json and shadow-cljs build tool would figure out the rest.

After the installation we would have to require the package. The require statment is almost identical to import from JS. In CLJS we swap the order - first we say from where and then what.

Every ClojureScript file starts with a ns - namespace declaration. Following that we have require, instead of import . And then we are defining a function with defn . This function will tap into our required firebase packages and instead of using . to navigate to our method initializeApp we are using / . We make sure that when we invoke JS method initializeApp we are converting CLJS map (datastructure) to JS Object with #js.

Let's try some other npm packages to get a better feeling for interop between npm and ClojureScript.

How about using React? ClojureScript has a couple of wrappers for React - the most popular one is Reagent. Here is a simple counter example with React hooks and Reagent.

In both examples we are first importing/requiring React and Reagent. Then we are defining state in React - using hooks and in Reagent using atoms.What follows is JSX (JavaScript) and hiccup (ClojureScript) component. This is cool, but how would we use React UI Libraries from Reagent?

One of the most popular UI libraires is material-ui. After the installation we require this library and then import our Button component as well as React. In Clojure Script we only require the Button. We don't need to require Reagent since it's in our ClojureScript deps. To interop with React we would use :> form and pass all of the properties that we want in a {}.

How about Redux you ask? Well, there is a library that is build on top of Reagent, called re-frame. First designed in Dec 2014, it even pre-dates the official Elm Architecture. 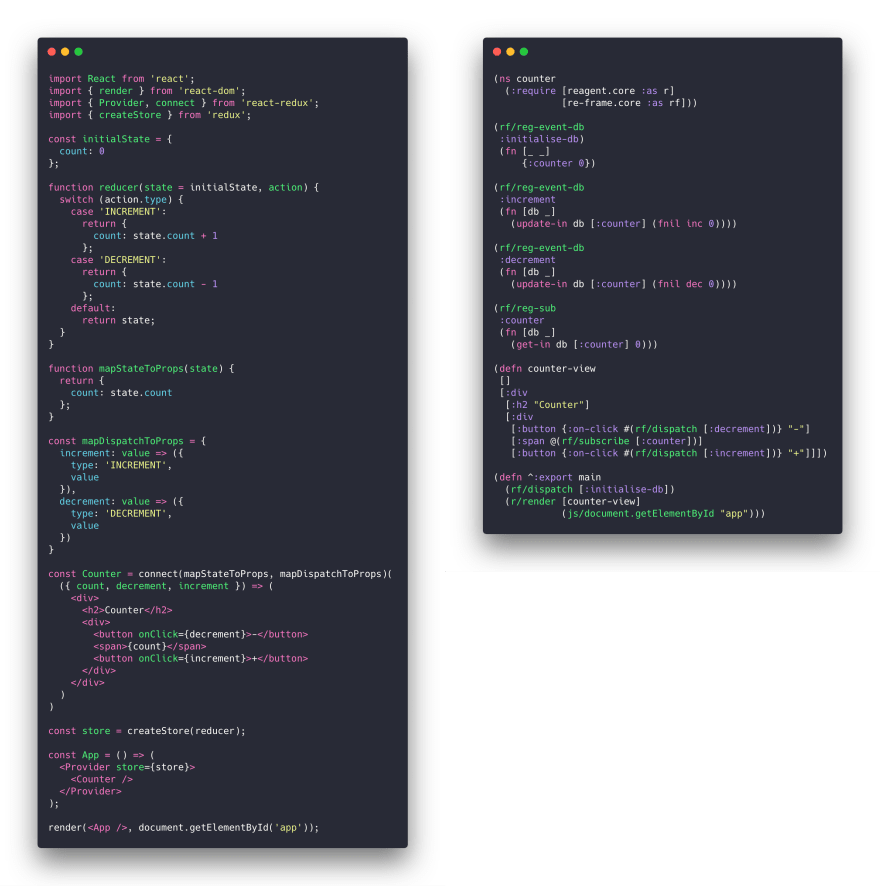 By now you should have a pretty good picture why CLJS loves npm ecosystem and how easy it is to interop from CLJS to JS. Maybe this is interesting for you, and your are wondering why? Why should you even try ClojureScript?

All ClojureScritp data structures are immutable and presistant. You don't need to learn new API if you want to leaverge something like ImmutableJS.

With shadow-cljs you don't need to spend time configuring your builds. You require what you need and the build tool will do the job.

You liability is the LoC you write . ClojureScript is one of the most concies programming languges out there. Chek out the last section of this comparision.

It compiles/transpiles to JavaScript. Just as ES (EcmaScript) ReasonML,PureScript, and Elm.

ClojureScript community is the most friendly and welcoming group of people that I have ever met online. We mainly hang out on Slack and ClojureVerse.

ClojureScript older brother - Clojure embraces all of these ideas with Java. If you want to write your server on one of the most performant and stable platform there is - Java Virtuel Machine - you can do that using the same language.

Once suspended, jacekschae will not be able to comment or publish posts until their suspension is removed.

Once unsuspended, jacekschae will be able to comment and publish posts again.

Once unpublished, all posts by jacekschae will become hidden and only accessible to themselves.

If jacekschae is not suspended, they can still re-publish their posts from their dashboard.

Once unpublished, this post will become invisible to the public and only accessible to Jacek Schæ.

Thanks for keeping DEV Community safe. Here is what you can do to flag jacekschae:

Unflagging jacekschae will restore default visibility to their posts.