I love a bit of architecture. How you structure your application is so important and if you get it wrong you'll really pay for it down the line. The problem is you often don't know you've got it wrong until it's too late. I've made this mistake so many times and iterated on solutions so much that now when I start a project I know exactly how I want it to be structured. I've developed what I consider to be a pretty robust pattern for application development.

Essentially I follow a loose Hexagonal Architecture pattern. I won't go into too much detail on what hexagonal architecture is as there are tonnes of articles on the concepts and ideas already. What I will do is show how I interpret it into my own applications. Although there are lots of articles about this pattern, they are very rarely discussed in terms of a node or front end application (usually they are Java-based).

For this article I'll focus on my node app. I'll cover the front end separately as although it's similar at the core, there are some necessary differences.

This is roughly how my codebase is structured:

This is also termed Ports and Adapters:

So what do all of these layers mean?

I've drawn a diagram of how this application fits into hexagonal architecture. Unfortunately diagram creating is not my strong point so I apologise in advance: 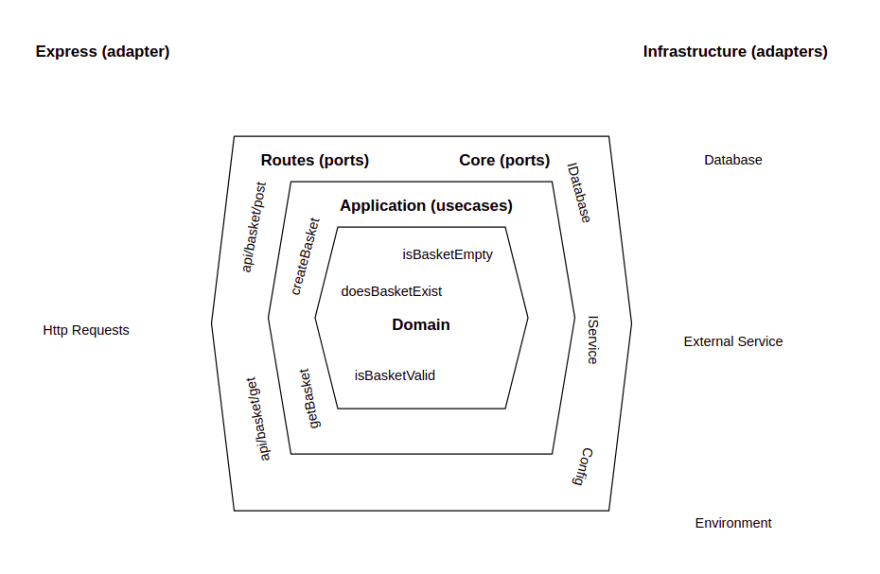 This looks like every other HA diagram I've ever seen and until you "get it" I don't think it really helps that much. I often find it easier to convey the flow of data like this:

At this point you might be thinking: "why are there so many steps for this one request?" and you're right. In a "basic" express app your flow would probably look more like this:

So yes this is more files and more layers of abstraction, but that's a good thing I promise!

Let's dive a little deeper into each of these folders:

My api layer contains my express routes and nothing else. You can think of this layer as being controllers in an MVC framework. The routes don't contain any logic, they purely pass the request data on to the application layer and then respond with the result. Not only does this keep the routes lean, it keeps all of my application logic agnostic of the delivery method.

The structure of this folder mirrors the express paths, for example: /src/api/basket/get.ts equates to a GET request to /api/basket. When setting up the application, I automatically find all of the files in this folder and calculate the express routes dynamically. This means I never have to manually write app.get('/api/basket') as it's just inferred. This kind of auto-routing is quite common with big frameworks and things like next.js. Personally I like it and it feels like "magic" without being too "behind the scenes".

These are my use cases. What I mean by this is that each method is an end-to-end feature. For example "get the basket", "add something to the basket", "remove something from the basket". Each use case will handle things like validating inputs, calling the necessary methods to carry out the action, validating the response, transforming data into the output type, and so on. Essentially this is the "orchestration" layer of the application.

There is almost always a 1:1 relationship between the api layer and the application layer. An api endpoint will only call one usecase, and a usecase will most likely only be used by one api endpoint. Why not just combine them into a single function? Loose coupling.

For example, although I am using express for my server, I may want certain use cases to be accessed via a CLI instead/as well. The application layer does not care if a request comes via the web api, or the cli, or some other method. It just cares about the arguments it receives.

The application, core, and infrastructure layers are hard to talk about in isolation (which is ironic) so the next few sections will be a bit intertwined...

How does the application layer actually "do stuff" though? If we want to get the basket, for example, how does it do this? We wouldn't want the application layer to import the database and query it directly, this would couple our low level implementation too tightly to the high level use case.

The core layer holds interfaces for all of the things the application can do. When I say interfaces, I mean typescript interfaces, there is no actual javascript here, purely types and interfaces.

So for example, if we want to get the basket, there will be a FetchBasket type that might look something like this:

Our application layer operates purely on these interfaces, at no point do we import a fetchBasket function. Instead, we import the interface from the core layer and use dependency injection to say "please fetch the implementation of this type". Dependency injection is really the glue that connects these layers together.

This means there is a "bridge" between the application layer and the underlying implementation detail, which is really important. The above function is really easy to test because the fetchBasket implementation does not exist, you can provide any implementation you want. It also means that your usecases are really clean, because all of the leg work is abstracted away and all you have to do is say "I'd like the implementation of this type please" and off you go.

One awesome benefit of this is that you can write your core layer, then your usecase layer, and not even bother with the infrastructure layer until later. This is fantastic for working on new features where you know what the use case is ("the user wants to see their basket"), and you know roughly what the interface will look like ("pass the user id to the database, get the basket back"), but you're not quite sure on the implementation detail yet.

Now that we have our core interfaces, the infrastructure layer contains all of the implementations for them. Essentially anything that causes a side effect, or reaches outside of your code (like accessing the database) is infrastructure.

Interestingly, infrastructure methods can rely on other core interfaces which means you can have several levels of abstraction. For example, the fetchBasket implementation will probably depend on an IDatabase interface, which in turn would be a wrapper around your actual database.

As mentioned earlier, I use dependency injection (specifically the service locator pattern) to register these infrastructure methods:

There are a couple of notes I wanted to add/clarify as well:

So that is an extremely long (but honestly brief) tour of my backend architecture. It's quite a lot to wrap your head around but I have confidence (and experience) that it is an extremely clean, testable, scalable application structure.

Once suspended, jackmellis will not be able to comment or publish posts until their suspension is removed.

Once unsuspended, jackmellis will be able to comment and publish posts again.

Once unpublished, all posts by jackmellis will become hidden and only accessible to themselves.

If jackmellis is not suspended, they can still re-publish their posts from their dashboard.

Once unpublished, this post will become invisible to the public and only accessible to Jack.

Thanks for keeping DEV Community 👩‍💻👨‍💻 safe. Here is what you can do to flag jackmellis:

Unflagging jackmellis will restore default visibility to their posts.