Git is a Distributed Version Control System which is used widely in Software Development. It helps in keeping track of every modification to the code. There are certain features provided by gits like rollback or revert and compare earlier versions of code to spot the differences and changes while minimizing disruptions.

Let's dig deeper to understand what happens in the background when we initiate the git repository and perform any other actions on git.

This is the first command that is used by us. The .git folder is created inside our project and some files are added to it. These files contain information about git configuration and history. Go to your terminal and type

When the user adds a new file it has two effects on the git folder.

In the above example, c6 is the directory inside the .git/objects
folder and rest is the hash inside it.

Whenever a new commit is made the following steps are executed:

This will give you the list of all the latest commits. The hash represents the root of the working copy. Pick any of the above hash and run the following command to see the full commit.

Git checks the latest commit and gets the tree graph at that moment. It writes entries in the tree graph to working copy and index file. The content is set to the hash of the last commit.

Check out a branch that is incompatible with the working copy

When the user makes a change in a file and checks out to another branch, for example, there are 2 branches b1 and b2 so in b1 there is a file that reads 1 and in b2 the same file reads 2. In this case, git aborts the change instead of replacing or making any change in the working copy.

Merging two branches means merging two commits. When the current branch is a descendant of a master branch than the merge can be auto fixed.

Here c1c5 and c1c6 are ancestor commits and c1c4 is the base commit. 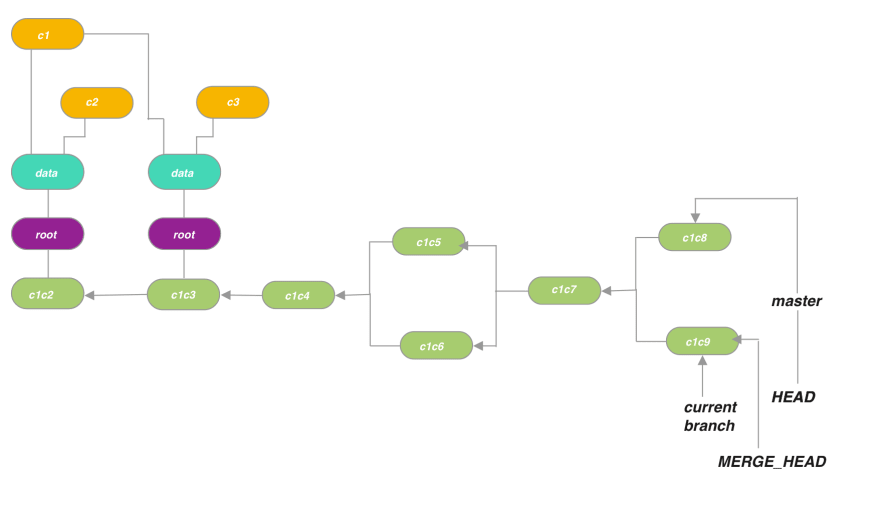 Here c1c8 and c1c9 are the current and master branch commits.

Git from inside out