In my previous post on Extreme learning machines I told that the famous pioneers in AI Marvin Minsky and Seymour Papert claimed in their book Perceptron [1969], that the simple XOR cannot be resolved by two-layer of feedforward neural networks, which "drove research away from neural networks in the 1970s, and contributed to the so-called AI winter".[Wikipedia 2013]

Let's explore what is this XOR problem...

The XOR, or “exclusive or”, problem is a classic problem in ANN research. It is the problem of using a neural network to predict the outputs of XOR logic gates given two binary inputs. An XOR function should return a true value if the two inputs are not equal and a false value if they are equal. All possible inputs and predicted outputs are shown in figure 1.

XOR is a classification problem and one for which the expected outputs are known in advance. It is therefore appropriate to use a supervised learning approach.

On the surface, XOR appears to be a very simple problem, however, Minksy and Papert (1969) showed that this was a big problem for neural network architectures of the 1960s, known as perceptrons.

Like all ANNs, the perceptron is composed of a network of *units*, which are analagous to biological neurons. A unit can receive an input from other units. On doing so, it takes the sum of all values received and decides whether it is going to forward a signal on to other units to which it is connected. This is called activation. The activation function uses some means or other to reduce the sum of input values to a 1 or a 0 (or a value very close to a 1 or 0) in order to represent activation or lack thereof. Another form of unit, known as a bias unit, always activates, typically sending a hard coded 1 to all units to which it is connected.

Perceptrons include a single layer of input units — including one bias unit — and a single output unit (see figure 2). Here a bias unit is depicted by a dashed circle, while other units are shown as blue circles. There are two non-bias input units representing the two binary input values for XOR. Any number of input units can be included. 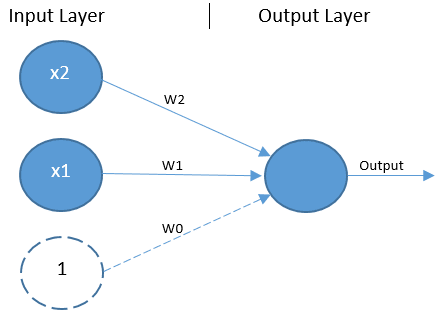 A simplified explanation of the forward propagation process is that the input values X1 and X2, along with the bias value of 1, are multiplied by their respective weights W0..W2, and parsed to the output unit. The output unit takes the sum of those values and employs an activation function — typically the Heavside step function — to convert the resulting value to a 0 or 1, thus classifying the input values as 0 or 1.

A limitation of this architecture is that it is only capable of separating data points with a single line. This is unfortunate because the XOR inputs are not linearly separable. This is particularly visible if you plot the XOR input values to a graph. As shown in figure 3, there is no way to separate the 1 and 0 predictions with a single classification line.

The solution to this problem is to expand beyond the single-layer architecture by adding an additional layer of units without any direct access to the outside world, known as a hidden layer. This kind of architecture — shown in Figure 4 — is another feed-forward network known as a multilayer perceptron (MLP). 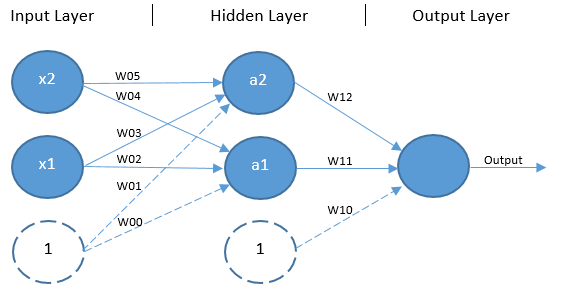 It is worth noting that an MLP can have any number of units in its input, hidden and output layers. There can also be any number of hidden layers. The architecture used here is designed specifically for the XOR problem.

Similar to the classic perceptron, forward propagation begins with the input values and bias unit from the input layer being multiplied by their respective weights, however, in this case there is a weight for each combination of input (including the input layer’s bias unit) and hidden unit (excluding the hidden layer’s bias unit). The products of the input layer values and their respective weights are parsed as input to the non-bias units in the hidden layer. Each non-bias hidden unit invokes an activation function — usually the classic sigmoid function in the case of the XOR problem — to squash the sum of their input values down to a value that falls between 0 and 1 (usually a value very close to either 0 or 1). The outputs of each hidden layer unit, including the bias unit, are then multiplied by another set of respective weights and parsed to an output unit. The output unit also parses the sum of its input values through an activation function — again, the sigmoid function is appropriate here — to return an output value falling between 0 and 1. This is the predicted output.

This architecture, while more complex than that of the classic perceptron network, is capable of achieving non-linear separation. Thus, with the right set of weight values, it can provide the necessary separation to accurately classify the XOR inputs. 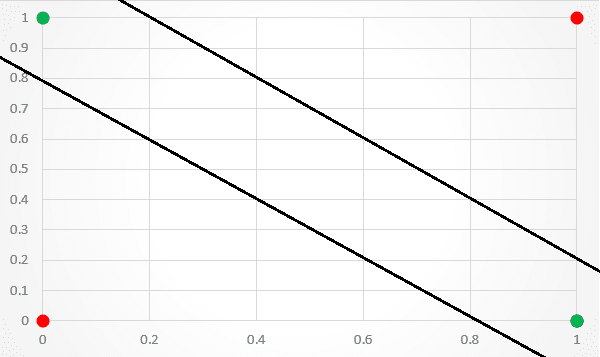 The elephant in the room, of course, is how one might come up with a set of weight values that ensure the network produces the expected output. In practice, trying to find an acceptable set of weights for an MLP network manually would be an incredibly laborious task. In fact, it is NP-complete (Blum and Rivest, 1992). However, it is fortunately possible to learn a good set of weight values automatically through a process known as backpropagation. This was first demonstrated to work well for the XOR problem by Rumelhart et al. (1985).

For the XOR problem, 100% of possible data examples are available to use in the training process. We can therefore expect the trained network to be 100% accurate in its predictions and there is no need to be concerned with issues such as bias and variance in the resulting model.

In this post, we explored the classic ANN XOR problem. The problem itself was described in detail, along with the fact that the inputs for XOR are not linearly separable into their correct classification categories. A non-linear solution — involving an MLP architecture — was explored at a high level, along with the forward propagation algorithm used to generate an output value from the network and the backpropagation algorithm, which is used to train the network.

The next post in this series will feature a implementation of the MLP architecture described here, including all of the components necessary to train the network to act as an XOR logic gate.

Namespace as a Service

Once suspended, jbahire will not be able to comment or publish posts until their suspension is removed.

Once unsuspended, jbahire will be able to comment and publish posts again.

Once unpublished, all posts by jbahire will become hidden and only accessible to themselves.

If jbahire is not suspended, they can still re-publish their posts from their dashboard.