When we start to study microservices, many different concepts, patterns, protocols, and tools are presented to us, like Messaging, AMQP, RabbitMQ, Event-sourcing, gRPC, CQRS, and many others. Among so many different words, there is one that always caught my attention and I always wanted to start studying it, the Apache Kafka.

The problem is that people always have a misunderstanding about what Kafka really is and is very common to see people talking about it like it as if it were just another messaging system. In fact, you can do that, but use Kafka only for that may be a waste of resources.

For that, my goal with this article is to explain how Kafka works and why you may need to use it in your projects. I’ll start presenting the principal concepts, explain why it’s not just a messaging system, I hope that it may help people that are entering this world, as I’m.

What is Apache Kafka?

If you enter the Kafka website, you’ll find the definition of it right on the first page:

What is an “A distributed streaming platform”? First, we need to define what is a stream. For that, I have a definition that made me really understand it: Streams are just infinite data, data that never end. It just keeping arriving, and you can process it in real-time.

And distributed? Distributed means that Kafka works in a cluster, each node in the cluster is called Broker. Those brokers are just servers executing a copy of apache Kafka.

So, basically, Kafka is a set of machines working together to be able to handle and process real-time infinite data.

His distributed architecture is one of the reasons that made Kafka so popular. The Brokers is what makes it so resilient, reliable, scalable, and fault-tolerant. That’s why Kafka is so performer and secure.

But why there is this misconception that Kafka is just another messaging system? To respond to that answer, we need first to explain how messaging works.

Messaging, very briefly, it’s just the act to send a message from one place to another. It has three principal actors:

And that is it, this is how the messaging works (very briefly, there’s a lot more). As you can see there’s nothing about streams, real-time, cluster (depending on what tool you chose, you can use a cluster too, but it’s not native, like Kafka).

Now that we know how messaging works, let’s get dive into the Kafka world. In Kafka, we also have the Producers and Consumers, they work in a very similar way that they work in the messaging, both producing and consuming messages.

As you can see it is very similar to what we’ve discussed about messaging, but here we don’t have the Queue concept, instead, we have the concept of Topics.

The Topic is a very specific type of data stream, it’s very similar to a Queue, it receives and delivers messages as well, but there are some concepts that we need to understand about topics: 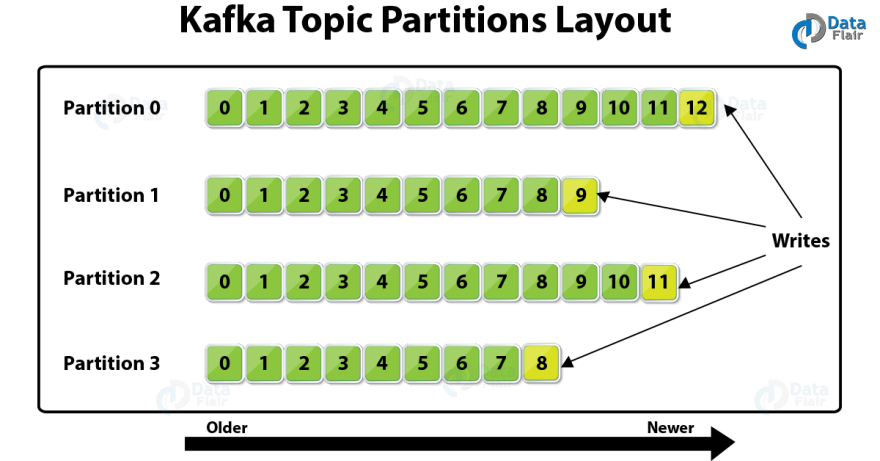 The partitions of a topic — https://d2h0cx97tjks2p.cloudfront.net/blogs/wp-content/uploads/sites/2/2018/07/Kafka-Topic-Partitions-Layout.png

As said before, Kafka works in a distributed way. A Kafka cluster may contain many brokers as needed.

As you can see in the above image, Topic_1 has three partitions, each broker is responsible for a partition of the topic, so, the Replication Factor of the Topic_1 is three.

To ensure the reliability of the cluster, Kafka enters with the concept of the Partition Leader. Each partition of a topic in a broker is the leader of the partition and can exist only one leader per partition. The leader is the only one that receives the messages, their replicas will just sync the data (they need to be in-sync to that). It will ensure that even if a broker goes down, his data won’t be lost, because of the replicas.

When a leader goes down, a replica will be automatically elected as a new leader by Zookeeper. 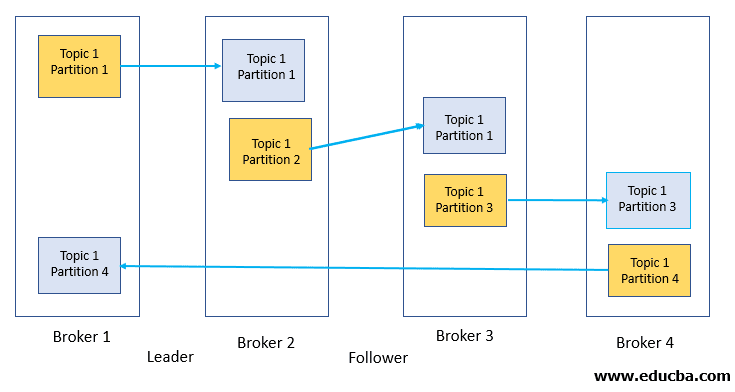 Just like in the messaging world, Producers in Kafka are the ones who produce and send the messages to the topics.

As said before, the messages are sent in a round-robin way. Ex: Message 01 goes to partition 0 of Topic 1, and message 02 to partition 1 of the same topic. It means that we can’t guarantee that messages produced by the same producer will always be delivered to the same topic. We need to specify a key when sending the message, Kafka will generate a hash based on that key and will know what partition to deliver that message.

That hash takes into consideration the number of the partitions of the topic, that’s why that number cannot be changed when the topic is already created.

When we are working with the concept of messages, there’s something called Acknowledgment (ack). The ack is basically a confirmation that the message was delivered. In Kafka, we can configure this ack when producing the messages. There are three different levels of configuration for that: 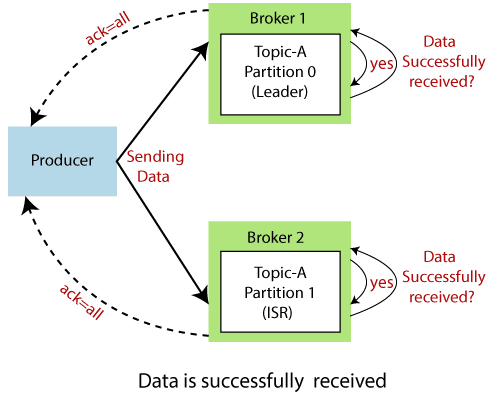 Consumers are applications subscribed to one or more topics that will read messages from there. They can read from one or more partitions.

That’s why we need to be careful when choosing the number of partitions and when producing the messages.

Another important concept of Kafka is the Consumer Groups. It’s really important when we need to scale the messages reading.

It becomes very costly when a single consumer needs to read from many partitions, so, we need o load-balancing this charge between our consumers, this is when the consumer groups enter.

The data from a single topic will be load-balancing between the consumers, with that, we can guarantee that our consumers will be able to handle and process the data. 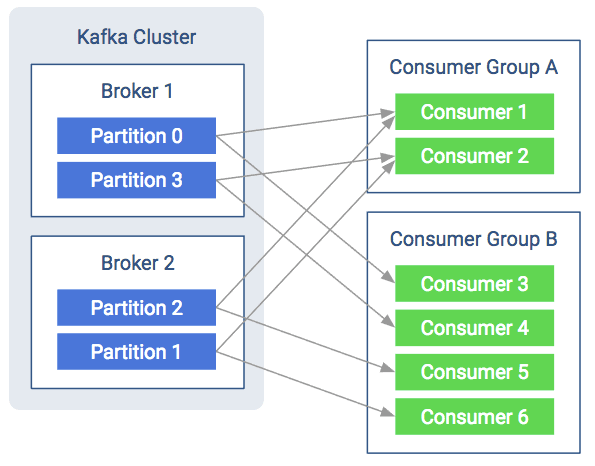 Kafka is one of the most completes and performer tools that we have today. After studying it and get their principal concepts, I realized that is much more than just a messaging system. Your distributed architecture and real-time processing are what make it so adaptable to very different scenarios and use cases.

With this article, I tried to dive deep into Kafka, presenting their principal concepts to make it easier to understand and bring their differences from the traditional messaging systems.

Because of the time, I left some important concepts out of this article, like idempotent producers, compression, transactions, etc, but I really hope that this helps you to study and explore more this world.

How we wrote Tarantool Kubernetes Operator

Create a Line Chart in Excel in Java

The Hardest Problem in Computer Science: How do You Wait While Compiling?

Functions in Python with examples.

joaosczip
Passionate about web development and some software engineering techniques
Side Project Sunday! How's it going?
#showdev #sideprojects #discuss #watercooler
Why is Rust the most loved programming language in the world?
#rust #programming #beginners #discuss
What If Animals Could Code...
#jokes #discuss #webdev #programming

Once suspended, joaosczip will not be able to comment or publish posts until their suspension is removed.

Once unsuspended, joaosczip will be able to comment and publish posts again.

Once unpublished, all posts by joaosczip will become hidden and only accessible to themselves.

If joaosczip is not suspended, they can still re-publish their posts from their dashboard.

Once unpublished, this post will become invisible to the public and only accessible to joaosczip.

Thanks for keeping DEV Community safe. Here is what you can do to flag joaosczip:

Unflagging joaosczip will restore default visibility to their posts.