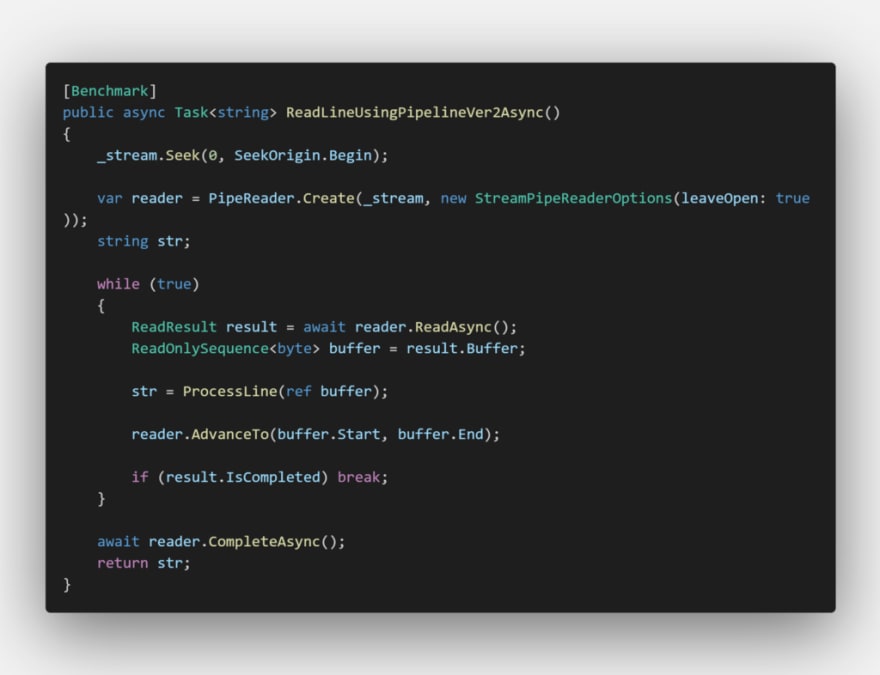 On part 1 of this series, I concluded:

In terms of speed, it is surprisingly slower than the ordinary ReadLine version given the string length ≤ 80 (perhaps I am doing it wrong? Let me know! I am still learning!). It is starting to shine, getting faster and faster if the string length ≥ 90. (270% 🚀 faster for string length = 1000).

I decided to take a further look and added more patterns to the benchmarks. The new code, instead of blindly using SequenceReader, is a mix of fast ReadOnlySpan and slow SequenceReader; by inspecting ReadOnlySequence.IsSingleSegment property.

The idea is, get a Span once and then pull as many lines as possible out of it before moving to the next segment of the sequence, as also pointed out by a generous Reddit user u/scalablecory, thanks! (apparently a member of the .NET Team?!)

As you can see, it performs well under every test case, rendering my previous conclusion obsolete!!!

And here is the gist version:

Noticed that this time it has fewer test cases; I reduced some LineCharMultiplier variations, as I don’t think we need it.

You can find the source code in my GitHub repository.

DISCLAIMER: Your mileage may vary. As with all performance work, each of the scenarios chosen for your application should be measured, measured and measured. There is no silver bullet.

Analysing a .NET Codebase with Roslyn

Getting Started with .NET Multi-platform App UI (MAUI) for Android