Hello again, JD here. Today I'm writing about how to install FiraCode on Windows and Ubuntu. This post is copying and pasting some commands on the console (at least that's the way I do it). So let's get to it.

FiraCode is a monospaced font with programming ligatures developed by Nikita Prokopov (tonsky on GitHub).

Programmers use a lot of symbols, often encoded with several characters. For the human brain, sequences like ->, <= or := are single logical tokens, even if they take two or three characters on the screen. Your eye spends a non-zero amount of energy to scan, parse and join multiple characters into a single logical one. Ideally, all programming languages should be designed with full-fledged Unicode symbols for operators, but that’s not the case yet.

Fira Code is a free monospaced font containing ligatures for common programming multi-character combinations. This is just a font rendering feature: underlying code remains ASCII-compatible. This helps to read and understand code faster. For some frequent sequences like .. or //, ligatures allow us to correct spacing.

By the time I discovered FiraCode I was working on some JavaScript projects and that's the main reason I became so attracted to the font. FiraCode gives the arrow functions, the "===" and many other things an amazing look. 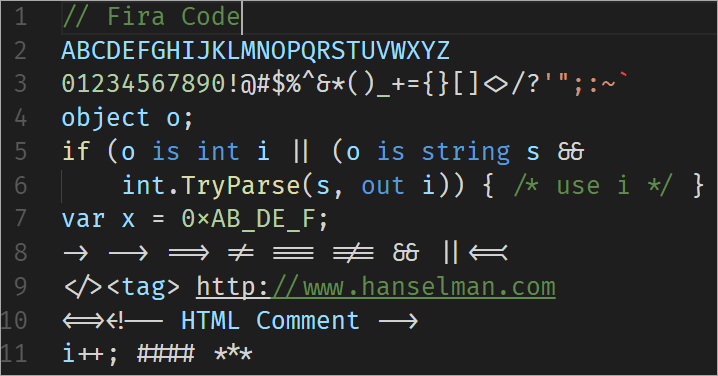 If it returns the version number, then you're all set and you can jump directly to FiraCode command. If it doesn't, then run one of the following commands with administrative permissions to install Chocolatey.

Run this command on the CMD

Or run this command on PowerShell

And voilà! We've got FiraCode installed on Windows!

To install FiraCode on Ubuntu you have to enable the universe repository. To do this we have to run the following commands on the terminal:

If that command doesn't work, try this one instead:

And finally, run the command:

Ta-da! FiraCode is now on Ubuntu!

That's it! We've successfully installed FiraCode on both Windows and Ubuntu! Let me know in the comments if this was helpful, or if there's something I should improve! 😁

How to convert a Python file to an ELF file, and how to execute the generated ELF file with/without using the terminal in Linux?

How to set permanent Aliases in Windows

Once suspended, josuerodriguez98 will not be able to comment or publish posts until their suspension is removed.

Once unsuspended, josuerodriguez98 will be able to comment and publish posts again.

Once unpublished, all posts by josuerodriguez98 will become hidden and only accessible to themselves.

If josuerodriguez98 is not suspended, they can still re-publish their posts from their dashboard.

Once unpublished, this post will become invisible to the public and only accessible to Josué Rodríguez (He/Him).

Thanks for keeping DEV Community 👩‍💻👨‍💻 safe. Here is what you can do to flag josuerodriguez98:

Unflagging josuerodriguez98 will restore default visibility to their posts.