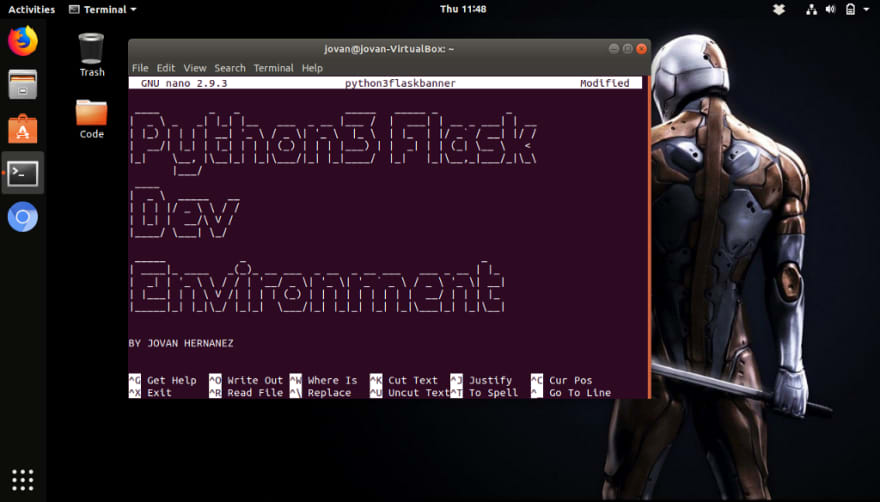 Flask is a great Python framework for getting ideas up and running quickly on a lightweight app environment. In this tutorial we are going to get Python 3.6 configured with development system packages to start a new Flask web application project and run it with Green Unicorn (Gunicorn).

But first, what is Green Unicorn?

Green Unicorn (from here on out, we will refer to it as Gunicorn) is “…a Python WSGI HTTP Server for UNIX. It’s a pre-fork worker model. The Gunicorn server is broadly compatible with various web frameworks, simply implemented, light on server resources, and fairly speedy.”

You can find out more about Gunicorn, from their website, which is also where I pulled that quote. But for the sake of brevity, Gunicorn is an easy to use HTTP server for Python web apps.

To begin, we’re going to install three packages. python-dev python-pip & python-virtualenv. You should also check which version of Python you have installed and it’s location, then run the following command below:

If run correctly, the package manager should spit a bunch of output and report when everything is set up. From there, we’ll use pip and virtualenv, both packages we just installed, to form a directory and handle our app dependencies.

We’re going to use pip to install a few dependencies and packages. Let’s start by updating our packages list and then installing wheel. Then we will install Flask and Gunicorn as well.

You should see a bunch of output expressing successful installations. If all goes well, you shouldn’t see any errors.

Testing Flask and Running it with Gunicorn

We need to create a new directory to hold our app files. This directory will live within our home folder, not within our virtualenvs folder.

Within the app.py file, write the following code:

Now move to the directory above the flaskproject folder, which in our case is the user home folder. You can also just typecd ~ to get there.

From your home folder, we can use Gunicorn to run your app with the following command:

If successful, we’ll get output of Gunicorn starting and listening on localhost:8000 or 127.0.0.0:8000 and going to that address should show your app.

That’s it! You basically set up a quick Python test environment using PIP, Flask, and Gunicorn. From here, you can build more dynamic web apps using Flask and test them the same way.