Redux is an implementation of Facebook's Flux design pattern.

Someone might say "Why use Redux in other than a React app?". It may seems a little strange now, but it helped my team to organize the data flow.

In my current job, I am involved in a project built in ASP.NET Web Froms technology. It is a quite old fashioned technology but we have tried to use some modern tools , like Typescript and webpack, in order to improve the development process.

The application uses a Master Page, which is the entry point and loads the appropriate User Control, depending on the url.

Each user control (from now on, we will call it a form) loads the respective javascript file which handles the client's interactions.

The communication with the server is happening via ajax calls to specific files with the .ashx extension (Generic Handlers), althoug there are some cases that a postback is triggered, causing a full refresh of the page. 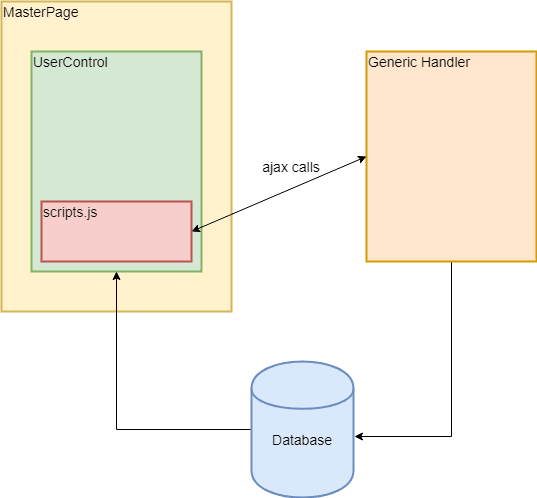 In our project, it is a common case that a form has some filters (Kendo controls), an Apply filters button and a grid that displays the results.

On load, each of these filters is getting some initial data. The two comboboxes get a list of departments and a list of employees, respectively, while the comments textbox gets a string. These datasources have to be retrieved from the database and be strored in some hidden fields on the backend.

On the frontend, on window.load, the Kendo controls get initialized with the hidden field's values as the datasources.

We can see that each filters gets its datasource from a different point.

The same happens when we want to gather the filters values and submit them to the server. We, again, have to search in different places to get each value, create an object with these values and send it to the server.

The following diagram illustrates the above process. 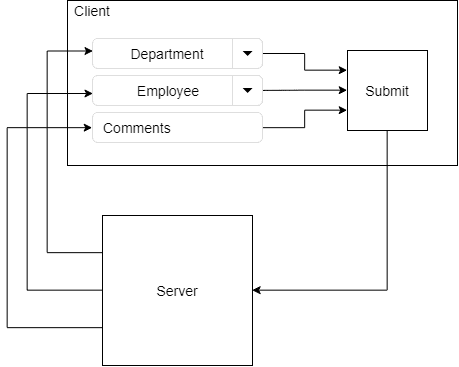 So, the problem is that we have to search in many different places in order to get the filters datasources and the filters values, in a sentence:

There isn't a single source of truth! 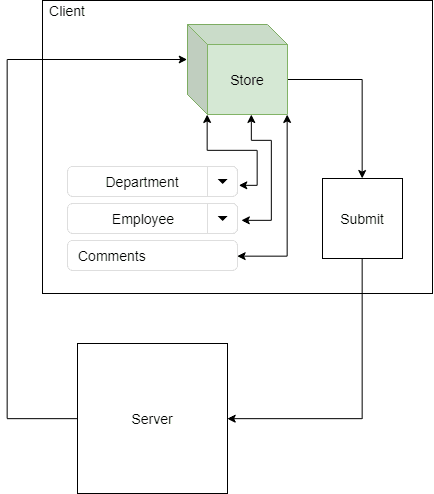 Now, lets see how we use Redux in our ASP.NET Web Forms project. 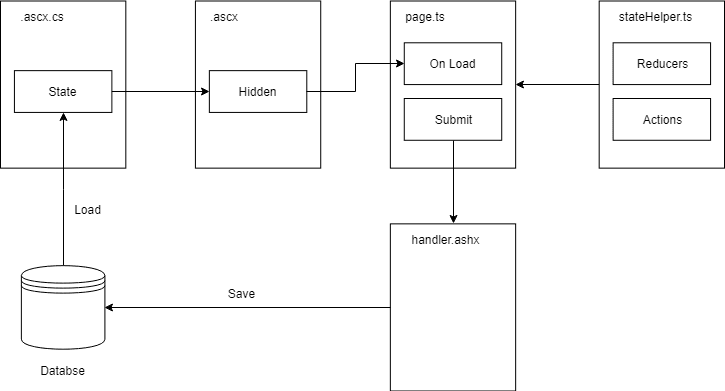 As the user control loads, the backend (.ascx.cs) queries the database, creates an object that represents the initial state, serializes it and stores it in a hidden field.

Before initializing the store object in the .ts file, we have to create some reducers and some actions.

The user control loads a specific javascript file which initializes a Redux store. We have imported the appReducer from the stateHelper.ts file and we use it to initialize the store.

After getting the initial state, we can build the ui using the data from our single source of truth, the store!

While having a store object available, we can dispatch the actions declared in the stateHelper.ts anywhere we want, inside our page.ts file.

Any time we dispatch an action, the reducer returns an updated copy of our application state. The state itself should never be mutated according to Flux pattern.

Now that we have a single source of truth, it is very easy to submit our data to the server. We just have to get the most recent verion of the application state and send it to the generic handler, which, in turn, saves the data to the database.

Despite the relative complexity and steep learing curve, Redux proved to be a helpful tool for our team. Here are some pros and cons that came out of Redux use:

It seems that Redux can be used in other than React applications too. If you have similar experiense you may want to drop your comments!

Web developer - want to learn something new every day