Getting up and running with Gitlab's Continuous Integration can take less than 10 minutes (depending on what you want to do, YMMV) I'm going to show you how:

To begin with - I just want to setup a simple task that will run eslint on our code. Luckily for us, we're already half way there.

Starting from version 8.0, GitLab Continuous Integration (CI) is fully integrated into GitLab itself and is enabled by default on all projects.

If you head on over to a project within Gitlab and click on Settings and CD / CD (https://gitlab.com/{username}/{project}/settings/ci_cd) you will see a drop down for Runners. You should see two columns. Specific Runner and Shared Runners. Awesome! (You don't have to do anything). 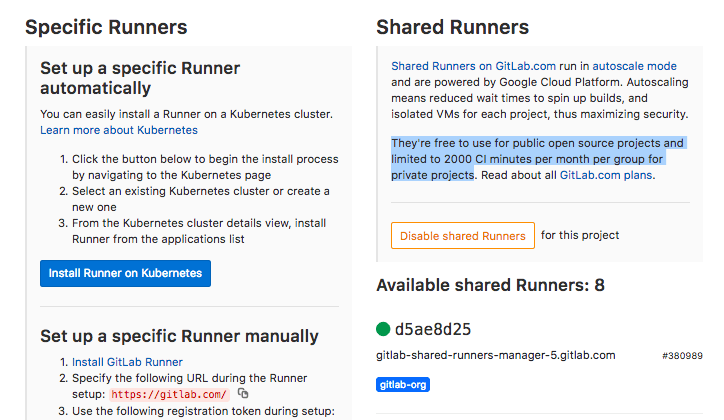 You should have some shared runners available. Shared runners are free to use for public open source projects and limited to 2000 CI minutes per month per group for private projects.

Runners are virtual machines that run jobs specified in a .gitlab-ci.yml. This file will tell the runner what jobs to do.

Runners use docker to pull an image and run our application in a container, so we need to tell it what image to pull, what things to install and what scripts to run.

Since I'm using node, we want to pull that image from Docker

Now we want to add a stage. Stages tell the runner what functions to run and when. For example you might have build, test and deploy stages. Stages can have multiple Jobs.

Commit the .gitlab-ci.yml and push it to gitlab!

Head on over to https://gitlab.com/{username}/{project}/-/jobs to see your job in action.

Assuming you have some eslint errors, your job will fail - Woohoo!

But I have plugins, and presets!

You can simply install these along side the npm i eslint statement.

If you have multiple, you can use a backslash \ to move it onto a new line for a multiline command

Now go and get rid of all your eslint errors and you're on your way to a passing pipeline!

Once suspended, karltaylor will not be able to comment or publish posts until their suspension is removed.

Once unsuspended, karltaylor will be able to comment and publish posts again.

Once unpublished, all posts by karltaylor will become hidden and only accessible to themselves.

If karltaylor is not suspended, they can still re-publish their posts from their dashboard.

Once unpublished, this post will become invisible to the public and only accessible to Karl Taylor.

Thanks for keeping DEV Community 👩‍💻👨‍💻 safe. Here is what you can do to flag karltaylor:

Unflagging karltaylor will restore default visibility to their posts.