Over the past few weeks, I've worked on a few flask apps across a variety of use cases. The aim was brush up my knowledge of flask as well proper structure for a production application. When I got challenged to use docker and flask app for a starter project and write about it. It was a perfect opportunity to really cement my knowledge as well provide my version of a quick-start guide.

This article is aimed at beginner developers who are looking for a guide using docker and flask. However, intermediate developers can also glean some knowledge. I will also endeavor to point out issues I faced while working on this project.

This article aims at developing a simple flask app and dockerizing the app and pushing the code to GitHub.

Prerequisites to Getting Started

These instructions are verified to work on most Unix systems. Note: Windows implementation may vary.

We are installing main flask module for our project. Flask-Bootstrap will help us integrate bootstrap in our app for styling.
We also install Jikanpy is a python wrapper for Jikan Api, which is the unofficial MyAnimeList Api.

Hopefully, everything is installed successfully. Alternatively check the code on

Using Docker is recommended, as it guarantees the application is run using compatible versions of Python and Node.

Inside the app there a Dockerfile to help you get started.

To build the development version of the app

To run the app

If everything went well, the app should be running on localhost:5001

Docker refers to open source containerization platform.
Containers are standardized executable components that combine application source code with OS-level dependencies and libraries. We can create containers without docker, however it provides a consistent, simpler and safer way to build containers. One of the major reasons for the meteoric growth of the use of containers from software development to software delivery and even testing, is the ease of use and reproducibility of the entire workflow.

Previously developers used Virtual Machines in the cloud or self-hosted servers to run their applications and workloads.
However, going from development to production was sometimes plagued with failures due differences in Operating systems or at times dependencies. Containers allow us to essentially take the code, file structure, dependencies etc. and package them and deploy them to a server and have them run as expected with minimal changes.

Here we'll run through some tools and terminology in reference to Docker:

Docker containers start out as single text file containing all the relevant instructions on how build an image.
A Dockerfile automates the process of creating an image, contains a series of CLI instructions for the Docker engine to assemble the image.

Docker images hold all application source code, libraries and dependencies to run an application. It is very possible to build a docker image from scratch but developers leverage common repositories to pull down pre-built images for common software and tools.
Docker images are made up of layers and each time a container is built from an image. a new layer is added becoming the latest version of the image. You can use a single to run multiple live containers.

This is a public repository of Docker images, containing over 100,000 container images. It holds containers of software from commercial vendors, open-source projects and even individual developers.

Refers the service that runs in your system powering the creation of Docker images and containers.The daemon receives commands from client and executes them.

This is an open-source scalable storage and distribution system for docker images. Using git( a version control system) the registry track image versions in repositories using tags for identification.

Flask prides itself in being micro framework therefore it only comes with simple configuration out of the box. However. it allows for a wide range of custom configuration options. This gives you
the freedom to start simple, add extensions for variety utilities as you grow.

Today we'll be building a simple web app to display the current seasonal anime from MyAnimeList. If you follow me on Twitter you'll know am a massive manga and anime fan. MyAnimeList is defacto platform for information, reviews and rankings thus it was the optimal choice. However, it doesn't have an API or sdk to access their content. Normally we would have to scrape the site, luckily the awesome community created Jikan Api as well jikanpy which is python wrapper for the API.

Now hopefully you carried out the steps above in Prerequisites section. Ensure your virtual environment is activated. Inside our flask-starter-app directory create run.py file.

This file will serve our app. First we import our app instance from app directory, which doesn't exist yet. Let's create it.
Create the app directory, inside it create:

Inside the __init__.py file add the following code:

The first two lines import the Flask and Bootstrap classes from their respective modules. We then instantiate the Bootstrap class and assign it bootstrap variable.The app variable contains an instance of the Flask class and pass along the name as the first parameter to refer to our app. We then initialize bootstrap by calling the init_app() method as passing pur app as an argument.
Finally, we import views file from our current directory.

Class is in Session

Inside the models.py file ad the following code:

This file will hold all of our models, here we create an Anime class to hold data from the Api. We import dataclass decorator from the dataclasses module. This will give us access to a variety of special methods, allowing us to keep our code simple and succinct. We attach the decorator to our class and then proceed to define the structure of the data from the Api. Check the docs to understand more.

Add the following to the anime_request.py file:

In the code above we import Jikan class from the jikanpy module, this will give us access to variety of methods to make requests to the Jikan Api. We also import our Anime class from the models file. we create a variable jikan and assign it an instance of the Jikan class.
We now define get_season_anime function to make requests to the Jikan Api and append it to a list. We create a variable season_anime_request that calls season method from Jikan class. It accepts the two parameters: year and season, this is handy when you want retrieve specific data from year and even season. In our case we don't specify in order to get the current season anime. We then define an empty list to hold our data.

The season method returns a dictionary of various key value pairs. The data we need is values of the anime key. which is a list of dictionaries. We add an if statement to check if key we want exists, then loop through the values. We create appropriate variables to reference the data in the response.
We create a new_anime variable that is an instance of Anime class. We append our class to our empty list, finally we return the list of classes.

This file is holds routes for our flask application. Currently, we'll only have one, feel free to add more. We begin by importing render_template this will pass render our html pages in the browser and pass along any required parameters. We also import get_season_anime function from anime_request file. We also import our app from __init__.py file, this allows use the @app decorator that exposes the route method. This registers routes passed as arguments as well the methods allowed for the route.

Add the following to your index.html file inside the templates folder:

Flask uses the jinja templating engine. This allows us to use a slew of advanced features. In our case we extend the base html file containing all bootstrap styling, this keeps allows to have a basic structure that applies all of our pages. We also use special {% %} to define a special navbar block.
Normally this is set in its own file and imported but here we'll just have it here. We define a content block inside we loop through season_anime argument passed in our views file. For each value we render a card with title, image, number of episodes and the date it started airing.

Open a terminal and run python run.py Your app should look similar below:

Now we have a fully functional flask app, lets dockerize it. Inside the root of our app(flask_starter_app), create a Dockerfile.
Add the following configuration:

The first line sets the base image to build from, in our case we're using the python 3.9.7 image to mirror the development
environment. Let’s go over some of these Docker instructions:

Now that we gave a Dockerfile, let's check it builds correctly 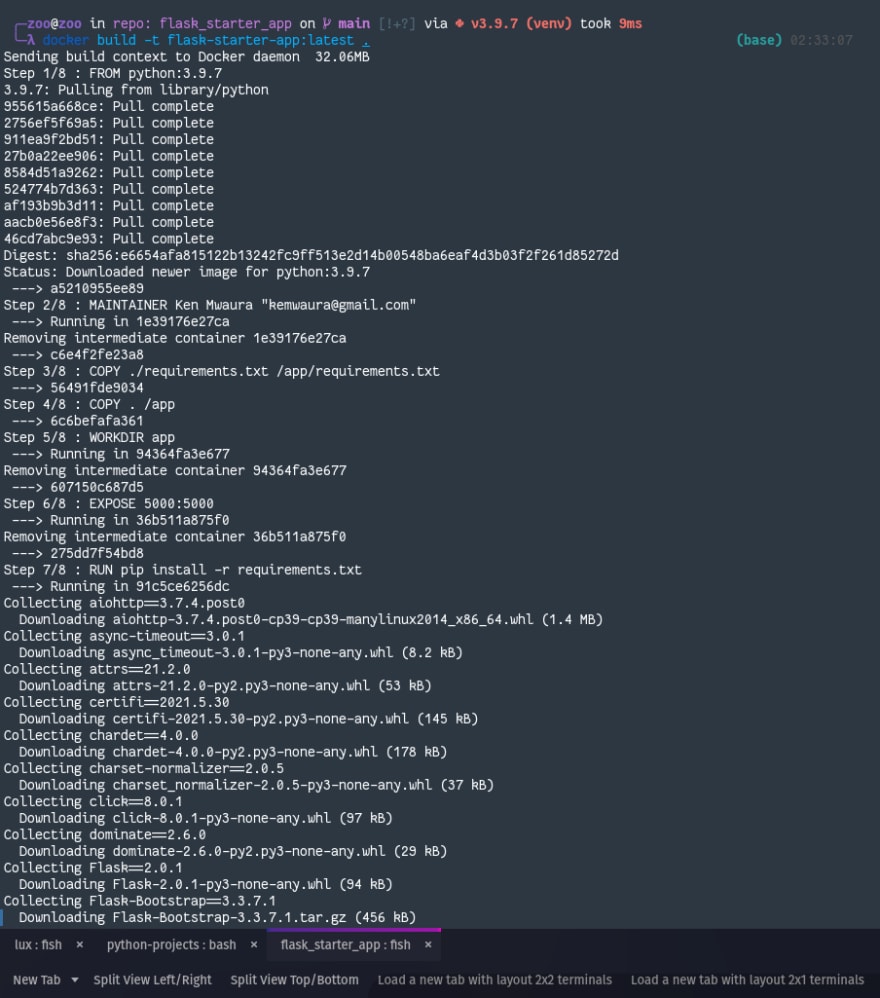 After the build completes, run the container

Go to localhost:5001 and you should see your app running as below: 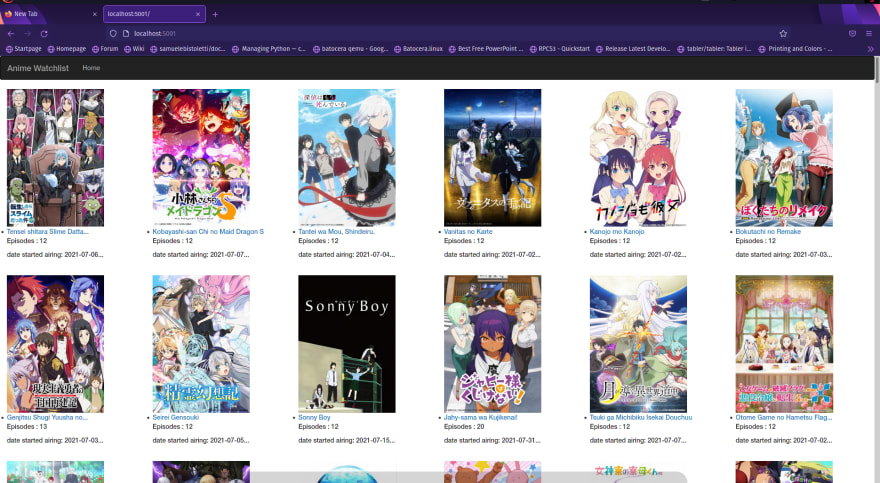 Ensure you are using the right ports. Flask by default runs on port 5000 (not 8000 like Django or 80 like Apache).
Check out Binding Docker Ports for more information.

I hope you liked this write-up and get inspired to extend it further. Keep coding! Feel free to leave comments below or
reach out on Twitter: Ken_Mwaura1.

Once suspended, ken_mwaura1 will not be able to comment or publish posts until their suspension is removed.

Once unsuspended, ken_mwaura1 will be able to comment and publish posts again.

Once unpublished, all posts by ken_mwaura1 will become hidden and only accessible to themselves.

If ken_mwaura1 is not suspended, they can still re-publish their posts from their dashboard.

Once unpublished, this post will become invisible to the public and only accessible to Zoo Codes.

Thanks for keeping DEV Community 👩‍💻👨‍💻 safe. Here is what you can do to flag ken_mwaura1:

Unflagging ken_mwaura1 will restore default visibility to their posts.