In 2015, the world's one of the leading open source solutions providers, Red Hat Inc. acquired Ansible, a software platform famous for its easy-to-use means for automation and development in the software powered organizations and loved by many IT people. Every company is a software-powered company these days, and automation has become crucial. With ever-increasing complex IT environments that often need maintenance, updates, scaling-up activities, for system admins to keep up-to-date of everything manually is a burden and a daunting task. The automation simplifies complex tasks using tools like Ansible, allowing developers, operations people, and system admins to concentrate on the tasks that add value to the organization.

Today, we will see how Ansible has become a must-have tool for IT automation and DevOps. 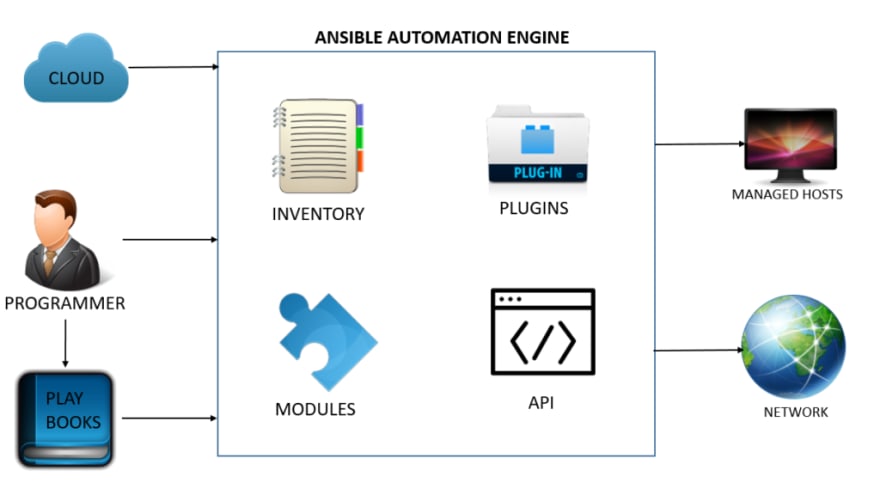 Ansible is a simple but powerful configuration management and orchestration tool. Ansible is mainly used for the automation of cross-platform computer support tasks. It is fundamentally intended for IT professionals, who use it for configuration management, cloud provisioning, application deployment, intra-service orchestration, updates on workstations and servers, and nearly for anything a systems administrator does on a day-to-day basis. Ansible doesn't depend on agent software and, most importantly, no additional custom security infrastructure, so this makes it easy to deploy. It uses a straightforward language (YAML, in the form of Ansible Playbooks) that allows people to use it to describe automation jobs, and this way, it's easy to use.

Why Ansible and how it works?

Ansible does not just automate but also simplifies the repetitive, complex, and strenuous tasks that bring substantial time savings and increases overall productivity. As we already know, Ansible helps us to automate server and cloud provisioning, configuration management, and application deployment.

Ansible works by connecting to your server with SSH and thereby pushing out small programs, known as 'Ansible modules' to it. Ansible's most powerful feature of creating playbooks, a small piece of YAML code, is used to automate almost anything related to your IT requirements.

The five advantages that make Ansible a favorite automation tool.

Building and maintaining large-scale modern IT systems involves a lot of elements that should be taken care of and can be a resource-intensive effort, and this is more prone to increased risk due to manual errors. Configuration and resource management is an automated method of maintaining computer systems and software in a desired, known, and consistent state. Configuration management suggests and ensures the configuration of servers, system resources, computer systems, and other IT assets are known, good, and in a trusted condition. It is sometimes also referred to as IT automation.

The real strength of Ansible is 'Playbooks.' A playbook works like a straightforward recipe or an instructions manual that instructs Ansible what to do and how to execute things. Playbooks 2are written in simple YAML. In simple terms, an Ansible playbook is an organized and systematic unit of scripts which defines work for a server configuration executed by the automation tool Ansible. An Ansible playbook will have one or many plays, and each defines the work that should be done as suggested for a configuration on a managed server. An administrator creates every play in Ansible with environment-specific elements and parameters for the target machines.

Infrastructure-as-code has been considered as one of the DevOps best practices, and Ansible makes it possible by helping people automate IT-related tasks. Ansible also provides even more advanced management flows, such as roles, which are useful for organizing playbooks and a further level of abstraction.

To know more, we recommend the official documentation and our simple videos on Ansible listed below,

Get started with github