Three of the most popular Container Orchestration tools are Docker Swarm, Kubernetes, and MESOS.

For this part of the study guide series, we shall cover Docker Swarm.

Docker Swarm helps you run applications on the Docker Engine seamlessly through multiple nodes that reside in the same containers. With Docker Swarm, you can always monitor the state, health, and performance of your containers and the hosts that run your applications.

As you prepare for the DCA exam, some of the topics of Docker Swarm that you’ll need an in-depth understanding of include:

Let’s explore some of these areas in detail:

As you study for your exam, you should develop a high level of familiarity with the structure and architecture of Docker Swarm.

Docker Swarm lets you integrate different Docker machines onto a single cluster. This helps with your application’s load balancing and also improves its availability. A Docker Cluster is made up of different instances called Nodes. Nodes can be categorized into two types: Manager and Worker nodes.

A Manager Node receives instructions from a user, turns these into service tasks, which are then assigned to one or more worker nodes. Such nodes also help maintain the desired state of the cluster in which it belongs. Managers can be configured to run production workloads too, when needed.

On the other hand, a Worker Node receives instructions from the manager nodes, and uses these instructions to deploy and run the necessary containers.

Some features of Docker Swarm Architecture include:

Setting up a 2-Node Swarm Cluster

This lesson is a demonstration of how you can create a Docker Swarm cluster with 2-worker nodes and 1-manager.
The prerequisites needed for this session will include:

To initialize Docker Swarm on your manager node, use the following command while the manager is active:

This command initializes Swarm on the selected node, which is now a manager. The command also returns a script you will use to add a worker to this swarm, as indicated on the Command Line Interface.

To add the second worker to this Swarm, use the following command:

To display a list of your nodes and workers’ names and status, type the following command onto the CLI:

You will learn some of the common Swarm operations that involve promoting, draining, and deleting nodes.

To promote a node to manager, you will run the command:

To demote a manager node to Worker, you will run the command:

When you want to perform upgrades and maintenance on your cluster, you might need to drain each node independently, one at a time. Let us assume that the current state of the cluster has the following nodes, as shown below:

To drain your node, use the command:

This command brings down containers on worker1 and runs replica instances on another worker until it gets back up.

Once you are done patching or maintaining your node, you will run the update command but with the availability being active to bring it back up. The command to use is:

To delete a node from a cluster, drain it so that it’s workload is redistributed to another node, then run the command:

Docker Swarm uses a RAFT algorithm to create distributed consensus when more than one manager node is running on a cluster. Having multiple managers in a cluster helps with fault tolerance.

The best practices for high availability in Swarm include:

If more than the allowed number of managers fail, you cannot perform managerial duties on your cluster. The worker nodes will, however, continue to run normally with all the services and configuration settings still active.

To resolve a failed cluster, you could attempt to bring the failed managers back online. If this fails, you can create a new cluster using the force-create command. This will be a healthy, single-manager cluster. The command for force create is:

Once this cluster has been created, you can promote other workers into manager nodes using the promote command.

As you begin to deploy your clusters, you’ll need a way to run multiple instances of your application across several worker nodes to help with automation and load balancing. The Docker Service allows you to launch containers in a coordinated manner across several nodes.

To create 3 replicas of your application using the Docker service, run the command: 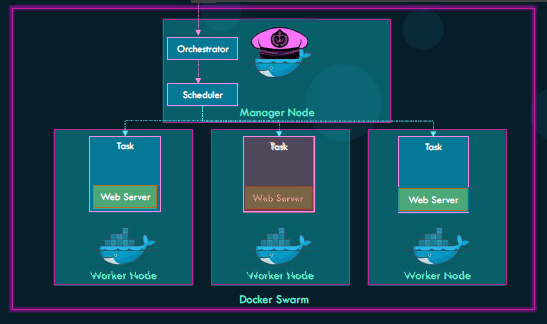 When you deploy your applications, an API server creates a service which is then divided into tasks by the orchestrator. The allocator then assigns each task an IP address, and a dispatcher assigns these tasks to individual workers. The scheduler then manages task handling by the workers.

Here are a few common service tasks and their Docker Commands.

Attach a service to a network 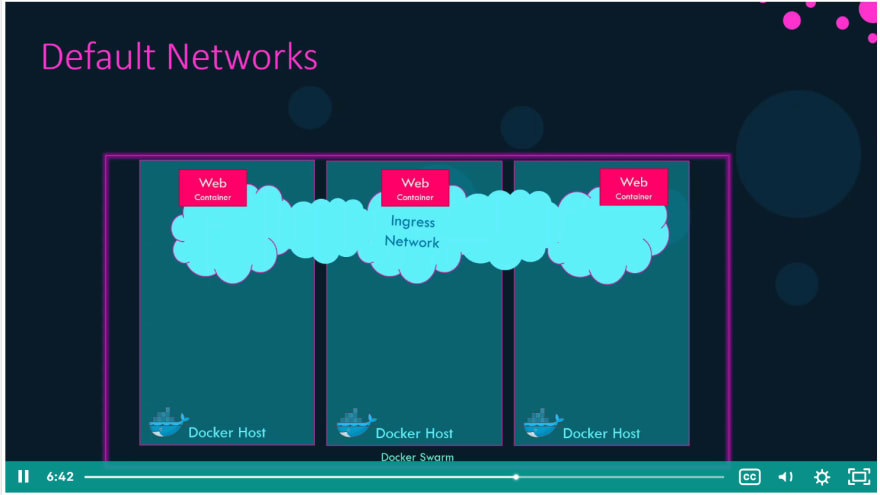 Here are some network ports and their purposes.

To publish a host on port 80 pointing to a container on port 5000, use the command:

Containers and services in a node can communicate with each other directly using their names. To make sure that these containers can ‘see’ each other, you should create an overlay network in which you should place the application and the naming service. For instance:

Then create an API server within this network:

In Docker, a stack is a group of interrelated services that together form the functionality of an application. All of your application’s configuration settings and changes are stored in a docker configuration file, known as a Docker Stack or Docker Compose File. Docker Compose lets you create stack files in YAML, which makes your application easier to manage, highly distributed, and scalable. The docker stack file also lets you perform health checks on your container and set the grace period during which the health check stays inactive.

To create a docker stack file, run the command:

To understand how container orchestration tools manage storage, it is important to know how docker manages storage in containers. Getting to know storage in docker will go a long way in helping you manage storage with Kubernetes. Storage in Docker is managed by two techniques: Storage Drivers and Volume Drivers.

Docker uses Storage Drivers to enable layered architecture. These are attached to containers by default and point file systems to the default path: /var/lib/docker where it stores files in subfolders such as aufs, containers, image and volumes.

To create a volume on Amazon AWS ElasticBlockStorage, run the command:

Here is a quick quiz to help you assess your knowledge. Leave your answers in the comments below and tag us back.

Quick Tip - Questions below may include a mix of DOMC and MCQ types.

Which command can be used to remove a kubeapp stack?

Which command can be used to promote worker2 to a manager node? Select the right answer.

What is the command to list the stacks in the Docker host?

What is the maximum number of managers possible in a swarm cluster?

... are one or more instances of a single application that runs across the Swarm Cluster.

Once you have understood Swarm architecture, set up a cluster, and ensured high availability, you would have developed enough familiarity to tackle real-world projects. Swarm services will help you automate the interaction between various nodes to help with load balancing for distributed containers. By following this guide, you will have enough knowledge on the importance of Container Orchestration and how Docker Swarm offers a simple, no-fuss framework that helps keep your containers healthy.

To test where you stand in your Docker certification journey take the DCA Readiness Test at dca.kodekloud.com. On KodeKloud, you also get a learning path with recommendations, sample questions and tips for clearing the DCA exam.