DEV Community is a community of 749,631 amazing developers

Software development and related methodologies have come a long way with the advent of Agile, Lean, and DevOps. Now, it is all about Automation - frequent and faster releases in small chunks, so the features and software reach the target audience in a much quicker and more efficient way. DevOps has become a center stage, and every software developer wants to learn more about modern software development approaches and tools. One such tool is 'Git,' and is a must-know for every developer out there.

Git is a must for anyone who writes code or is involved in a DevOps Project. In this article, we will discuss what Git is and other concepts related to it. 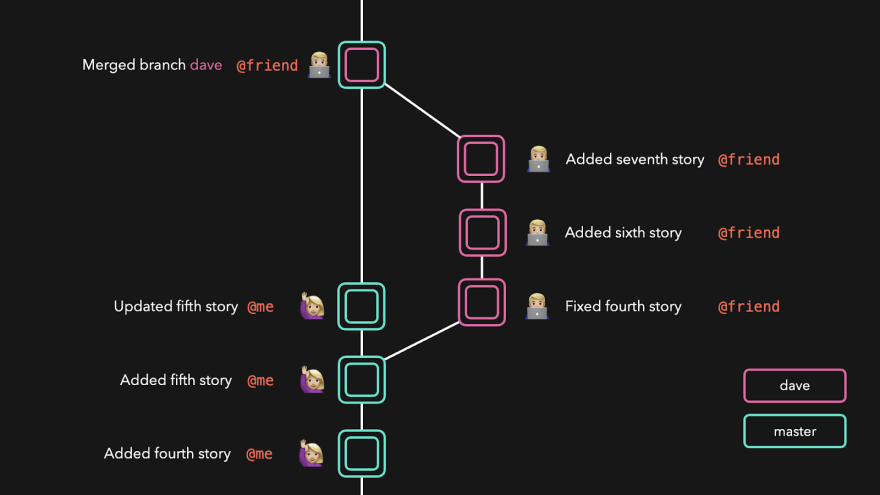 Git was developed by Linus Torvalds, the creator of Linux Operating System. Git is a Version Control System (VCS), which is more commonly used than the alternatives. On a fundamental level, there are two remarkable things a VCS allows you to do:

Git is a software that runs locally on the developers' machine. The files and history are stored on the developers' computer. Developers can also use online hosts such as GitHub and Bitbucket, to save a copy of their files and revision history. A central place to upload changes and download changes from others enables collaboration easily between the teams.

Software development involves a team of developers working together on the same code base. To avoid code conflict between these developers, we need a centralized version control system like Git. Git helps developers go back to older versions of the code base to make revisions such as fix bugs or revert code changes. With branches Git helps developers work on multiple feature implementations or bug fixes in parallel and later merge those changes in when ready..

With Git, you will be able to see what others are working on, review their code, view your previous changes, roll back to previous code, and do much more.

How to get Git?

Git usually is installed by default on many systems.

Role of GIT in DevOps

Version control is one of the best practices of DevOps. With version control, developers working on a project have the ability to version the software, share, collaborate, merge, and have backups.

When working in large organizations, where multiple teams work together on the same project, Git comes handy and makes it easy to track changes made by each team. It helps in tracking code, version control, and effective management of code.

Anyone willing to start or approach DevOps as a career should start from the basics, and GIT is the fundamental tool that overrides everything else.

Every company is now powered by software in one or the other ways. There are multiple projects handled by many developers in an organization, and they all need a means to track, upload, and receive changes to the code base. Effective repository management services are the key to fast and efficient software development. The most popular ones based on Git are GitHub, Bitbucket, and GitLab.

GitHub is a git-based repository host launched initially in 2008 by PJ Hyatt, Tom Preston-Werner, and Chris Wanstrath. As of now, GitHub is the largest repository hosting platform with more than 38 million projects. It authorizes to host and review code, manage projects, and build software.

Bitbucket was also launched in 2008 by an Australian startup and it initially supported only for Mercurial projects. In 2010 Bitbucket was smartly bought by Atlassian, and from the next year, it started supporting Git hosting, which is now its primary focus. Bitbucket has become a household name and provides free unlimited private repos, many powerful integrations like Jira and Trello, and has built-in continuous delivery.

GitLab started as a small project in 2011, aiming to provide an alternative to the available repository management solutions. The company was only incorporated in 2014. Gitlab now provides a complete DevOps setup for the organizations from continuous integration and delivery, agile development, security etc.

Here is a basic Git cheat sheet you would love to have.

Git is the most basic requirement in the software development and DevOps field.

This video will walk you through the basics of Git.

Difference between Git and GitHub

One of the most common questions we get asked are the differences between Git and Github. Git is the tool/technology that allows versioning of code and Github is the centrally hosted Git server where the Git repository lives. Developers use the remote repository hosted on Github to share their work among themselves. Github is just one of the many tools such as Gitlab, BitBucket etc. 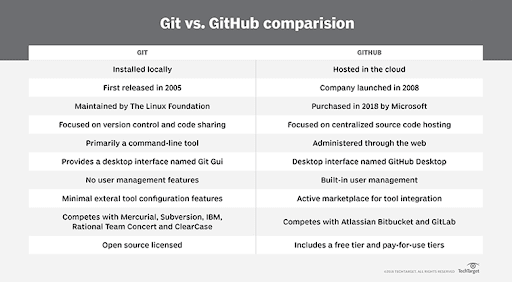 Myth: Git is only for Software Developers

Git is not just for developers. Git is for anyone working in IT - from Systems Administrators, to Solutions Architects, Software Engineers, Team leads, Project managers - should equally learn and understand the workflows in Git.

With the advent of Infrastructure as Code, System administrators and operations teams will be using Git to store code related to infrastructure such as Terraform Configuration files, Ansible Playbooks, Vagrant files, supporting shell scripts.

Git is not just a code repository. Git is where new software is developed. Today most of the popular projects are developed on Github - Kubernetes, Ansible, Terraform, Tensorflow, Helm Charts being a few of the top repositories. All of these projects have extensive documentation built on Github. The Git workflow was built with collaboration between developers in mind. Code reviews and approvals happen on Github. Github has a Project dashboard that enables project management.

Checkout our new course on Git for Beginners here

What exactly is IPFS?

6 Elegant Tricks in Python for Beginners

How do I code?